From Infogalactic: the planetary knowledge core
Jump to: navigation, search
This article is about amplitude in classical physics. For quantum-mechanical amplitude, see probability amplitude. For the video game, see Amplitude (video game).

The amplitude of a periodic variable is a measure of its change over a single period (such as time or spatial period). There are various definitions of amplitude (see below), which are all functions of the magnitude of the difference between the variable's extreme values. In older texts the phase is sometimes called the amplitude.[1]

Definitions of the term 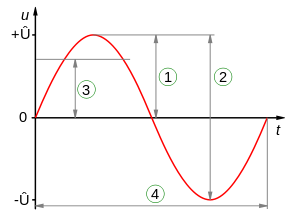 Peak-to-peak amplitude is the change between peak (highest amplitude value) and trough (lowest amplitude value, which can be negative). With appropriate circuitry, peak-to-peak amplitudes of electric oscillations can be measured by meters or by viewing the waveform on an oscilloscope. Peak-to-peak is a straightforward measurement on an oscilloscope, the peaks of the waveform being easily identified and measured against the graticule. This remains a common way of specifying amplitude, but sometimes other measures of amplitude are more appropriate.

In audio system measurements, telecommunications and other areas where the measurand is a signal that swings above and below a zero value but is not sinusoidal, peak amplitude is often used. This is the maximum absolute value of the signal.

Semi-amplitude means half the peak-to-peak amplitude.[2] It is the most widely used measure of orbital amplitude in astronomy and the measurement of small semi-amplitudes of nearby stars is important in the search for exoplanets.[3]

Root mean square (RMS) amplitude is used especially in electrical engineering: the RMS is defined as the square root of the mean over time of the square of the vertical distance of the graph from the rest state.[5]

For complicated waveforms, especially non-repeating signals like noise, the RMS amplitude is usually used because it is both unambiguous and has physical significance. For example, the average power transmitted by an acoustic or electromagnetic wave or by an electrical signal is proportional to the square of the RMS amplitude (and not, in general, to the square of the peak amplitude).[6]

For alternating current electric power, the universal practice is to specify RMS values of a sinusoidal waveform. One property of root mean square voltages and currents is that they produce the same heating effect as direct current in a given resistance.

The peak-to-peak voltage of a sine wave is about 2.8 times the RMS value. The peak-to-peak value is used, for example, when choosing rectifiers for power supplies, or when estimating the maximum voltage that insulation must withstand. Some common voltmeters are calibrated for RMS amplitude, but respond to the average value of a rectified waveform. Many digital voltmeters and all moving coil meters are in this category. The RMS calibration is only correct for a sine wave input since the ratio between peak, average and RMS values is dependent on waveform. If the wave shape being measured is greatly different from a sine wave, the relationship between RMS and average value changes. True RMS-responding meters were used in radio frequency measurements, where instruments measured the heating effect in a resistor to measure current. The advent of microprocessor controlled meters capable of calculating RMS by sampling the waveform has made true RMS measurement commonplace.

In telecommunication, pulse amplitude is the magnitude of a pulse parameter, such as the voltage level, current level, field intensity, or power level.

Pulse amplitude is measured with respect to a specified reference and therefore should be modified by qualifiers, such as "average", "instantaneous", "peak", or "root-mean-square".

Pulse amplitude also applies to the amplitude of frequency- and phase-modulated waveform envelopes.[7]

In this simple wave equation

A is the peak amplitude of the wave,
x is the oscillating variable,
ω is angular frequency,
t is time,
K and b are arbitrary constants representing time and displacement offsets respectively.

The units of the amplitude depend on the type of wave, but are always in the same units as the oscillating variable. A more general representation of the wave equation is more complex, but the role of amplitude remains analogous to this simple case.

For waves on a string, or in medium such as water, the amplitude is a displacement.

For electromagnetic radiation, the amplitude of a photon corresponds to the changes in the electric field of the wave. However radio signals may be carried by electromagnetic radiation; the intensity of the radiation (amplitude modulation) or the frequency of the radiation (frequency modulation) is oscillated and then the individual oscillations are varied (modulated) to produce the signal.

The amplitude as defined above is a constant and the wave is said to be wave length continuous. If this condition does not hold, amplitude alike variations with time and/or position may be quantified in terms of the envelope of the wave.

If the waveform is a pure sine wave, the relationships between peak-to-peak, peak, mean, and RMS amplitudes are fixed and known, as they are for any continuous periodic wave. However, this is not true for an arbitrary waveform which may or may not be periodic or continuous.

For a sine wave, the relationship between RMS and peak-to-peak amplitude is:

For other waveforms the relationships are not (necessarily) arithmetically the same as they are for sine waves.