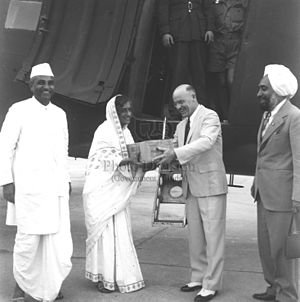 Ninety-three cases of penicillin, a gift from the Canadian Red Cross to India arrived at New Delhi in a special plane from Canada on 17 October 1947. Presenting the penicillin to Amrit Kaur, the then Health Minister in the Government of India at the Palam aerodrome. Dr. Jivraj Mehta, Director General of Health Services appears on the left and standing on the right is Sardar Balwant Singh Puri of the Indian Red Cross.

Rajkumari Amrit Kaur DStJ (2 February 1889 – 6 February 1964) was the health minister in the Indian Cabinet for ten years after India's independence from the British Raj in 1947. She was an eminent Gandhian, a freedom fighter, and a social activist.She was also a member of the Constituent Assembly,the body that framed the constitution of India.

Amrit Kaur was born on 2 February 1889 in Lucknow, Uttar Pradesh (then United Provinces), India. She and her seven brothers were the eight children of Rājā Harnam Singh, a member of the princely family of Kapurthala State in the Punjab region[1] and his wife Rāni Harnām Singh, who was the daughter of a Bengali Presbyterian mother and an Anglican father.

She had her early education in Sherborne School For Girls in Dorset, England, and had her college education at Oxford University. After completing her education in England, she returned to India.

Raja Harnam Singh enjoyed the confidence of many Indian National Congress (INC) party leaders, including Gopal Krishna Gokhale. After her return to India from England, she got interested in India's freedom struggle through the occasional visits of those leaders to her father's home. After meeting in person Mahatma Gandhi in 1919 in Bombay (Mumbai), she felt drawn to his thoughts and vision for the country. The notorious Jallianwala Bagh massacre of mostly Sikhs the same year by the British Raj troops convinced her of the necessity of India's gaining its freedom from the Raj. She joined the INC, and began to participate in India's struggle for freedom, and also in social reform activities in India.

For her participation in Gandhi-led 240-mile Dandi March in 1930, British Raj authorities imprisoned her.

She went to live at Mahatma Gandhi's ashram in 1934, and took up the austere life there despite her aristocratic background. She served as one of Gandhi's secretaries for sixteen years.

As a representative of the INC, in 1937 She went on a mission of goodwill to Bannu, in the present day Khyber-Pakhtunkhwa. The British Raj authorities charged her with sedition and imprisoned her.

In 1942, she participated in the Quit India Movement, and the Raj authorities imprisoned her again.

She worked to reduce illiteracy, and eradicate the custom of child marriages and the purdah system for women, which were prevalent then among some Indian communities.

After India's independence, Amrit Kaur became part of Jawaharlal Nehru's first Cabinet; she was the first woman to hold Cabinet rank. She was assigned the Ministry of Health and was one of only two Indian Christians in the Cabinet (along with John Mathai). In 1950, she was elected the president of World Health Assembly, becoming the first woman and the first Asian to hold that post; for the first 25 years of that organisation's history, only two women held that post.

Kaur was a strong moving force behind the establishment of the All India Institute of Medical Sciences in New Delhi, and became its first president. For establishing the institute, she secured aid from New Zealand, Australia, West Germany, Sweden, and US. She and one of her brothers donated their ancestral property and house (named Manorville) in Simla, Himachal Pradesh to serve as a holiday home for the staff and nurses of the Institute.

Kaur served as the Chairperson of the Indian Red Cross society for fourteen years. During her leadership, the Indian Red Cross did a number of pioneering works in the hinterlands of India. She initiated the Tuberculosis Association of India and the Central Leprosy Teaching and Research Institute in Madras (Chennai). She started the Amrit Kaur College of Nursing and the National Sports Club of India.

From 1957 until her death in 1964, she remained a member of Rajya Sabha. Between 1958 and 1963 Kaur was the president of the All-India Motor Transport Congress in Delhi. Until her death, she continued to hold the presidencies of the All India Institute of Medical Sciences, the Tuberculosis Association of India, and the St. John's Ambulance Corps. She also was awarded the Rene Sand Memorial Award.

She died in New Delhi on 6 February 1964.[2][3] Today, her private papers are part of the Archives at the Nehru Memorial Museum & Library, at Teen Murti House, Delhi.[4]

About the Plight of Harijans:

It is a crying shame that the people who cater for our services are relegated in most towns to live in the most abominable dwellings—if, indeed we can call their hovels by this name.

Child marriage is eating as a canker into the vitality of our national life. Girls become mothers while they are children themselves, and bring into the world offspring who are, in the very nature of things, the victims of disease and ill health.

About the Plight of Women:

The abolition of early marriage and purdah...will remove two of the main obstacles in the way of the spread of female education. Needless to say that the position of the widows in Hindu homes, marriage laws and the laws relating to the inheritance of property by women need radical alteration.

In the realm of educational reform, we have urged ever since our inception that there should be free and compulsory education. Again, as far as proper facilities for the female education are concerned until such time as universal, free and compulsory primary education as well as an adequate supply of infant and girls’ schools equipped with trained women teachers are introduced, we must continue to do our utmost to have the system of education in our existing institutions changed.