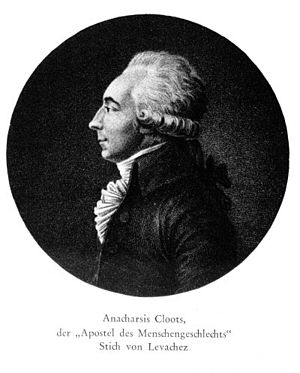 Jean-Baptiste du Val-de-Grâce, baron de Cloots (June 24, 1755 – March 24, 1794), better known as Anacharsis Cloots (also spelled Clootz), was a Prussian nobleman who was a significant figure in the French Revolution.[1] He was nicknamed "orator of mankind", "citoyen de l’humanité" and "a personal enemy of God".[2]

Born near Kleve, at the castle of Gnadenthal, he belonged to a noble Prussian family of Dutch origin. The young Cloots, heir to a great fortune, was sent to Paris at age eleven to complete his education, and became attracted to the theories of his uncle the abbé Cornelius de Pauw (1739–1799), philosophe, geographer and diplomat at the court of Frederick II of Prussia. His father placed him in the military academy of Berlin, but he withdrew at the age of twenty and travelled through Europe, preaching his revolutionary philosophy and spending his money as a man of pleasure.

On the breaking out of the Revolution, Cloots returned in 1789 to Paris, thinking the opportunity favorable for establishing his dream of a universal family of nations. On June 19, 1790 he appeared at the bar of the National Constituent Assembly at the head of thirty-six foreigners, and, in the name of this embassy of the human race, declared that the world adhered to the Declaration of the Rights of Man and of the Citizen. After this, he was known as the orator of the human race, by which title he called himself, dropping that of baron, and substituting for his baptismal names the pseudonym of Anacharsis, from the famous philosophical romance of the abbé Jean-Jacques Barthélemy.

In 1792 he placed 12,000 livres at the disposal of the French Republic for the arming of forty or fifty fighters in the cause of man against tyranny (see French Revolutionary Wars). After the riots of August 10, he became an even more prominent supporter of new ideas, and declared himself "the personal enemy of Jesus Christ",[3] abjuring all revealed religions.

In the same month he had the rights of French citizenship conferred on him; and, having in September been elected a member of the National Convention, he voted in favor of capital punishment for King Louis XVI, justifying it in the name of the human race, and was an active partisan of the war of propaganda.

Excluded at the insistence of Maximilien Robespierre from the Jacobin Club, he remained a foreigner in many eyes. When the Committee of Public Safety, under Robespierre's direction, levelled accusations of treason against the Hébertists, they also implicated Cloots to give substance to their charge of a foreign plot. Although his innocence was manifest, he was condemned and subsequently guillotined on March 24, 1794.[4] He incongruously followed Vincent, Ronsin, Momoro and the rest of the Hébertist leadership to the scaffold, in front of the largest crowd ever assembled for a public execution.[5]

Cloots was an original political thinker who crafted his own interpretation of the meaning of the French Revolution. He was a proponent of the world state, and he sought to promote a more broad-minded and internationalist understanding of the Revolution's potential. He imagined the institutions of the world state along the lines of those of the French Revolutionary Republic. Cloots's thought was expressed in several works, most importantly in his Bases constitutionnelles de la République du genre humain. [6]