Anastasius I (Latin: Flavius Anastasius Dicorus Augustus, Greek: Ἀναστάσιος; c. 431 – 9 July 518) was Byzantine Emperor from 491 to 518. During his reign the Roman eastern frontier underwent extensive re-fortification, including the construction of Dara, a stronghold intended to counter the Persian fortress of Nisibis. During his reign, one of the most fortified castle cities on the Adriatic, Durrës Castle in Durrës, was constructed.

Anastasius was born at Dyrrhachium in the Latin-speaking part of the Balkans; the date is unknown, but he is thought to have been born no later than 430 or 431. He was born into an Illyrian family,[1] the son of Pompeius (born c. 410), nobleman of Dyrrachium, and wife Anastasia Constantina (born c. 410). His mother was an Arian, sister of Clearchus, also an Arian, and a paternal granddaughter of Gallus (born c. 370), son of Anastasia (born c. 352) and husband, in turn daughter of Flavius Claudius Constantius Gallus and wife and cousin Constantina.[2]

Anastasius had one eye black and one eye blue (heterochromia),[3] and for that reason he was nicknamed Dicorus (Greek: Δίκορος, "two-pupiled").

At the time of the death of Zeno (491), Anastasius, a palace official (silentiarius), held a very high character, and was raised to the throne of the Eastern Roman Empire by Ariadne, Zeno's widow, who preferred him to Zeno's brother, Longinus.

Ariadne married him shortly after his accession on 20 May 491. His reign, though afterwards disturbed by foreign and internecine wars and religious distractions, commenced auspiciously. He gained the popular favour by a judicious remission of taxation, and displayed great vigour and energy in administering the affairs of the Empire.

The Isaurian War (492-497) was stirred up by the Isaurian supporters of Longinus, the brother of Zeno who was passed over in his succession in favor of Anastasius. The battle of Cotyaeum in 492 "broke the back" of the revolt, but guerrilla warfare continued in the Isaurian mountains for some years longer.

In the Anastasian War (502–505), Theodosiopolis and Amida were captured by the Sassanids, but Persian provinces also suffered severely and the Byzantines recovered Amida. Both adversaries were exhausted when peace was made in 506 on the basis of the status quo. Anastasius afterwards built the strong fortress of Daras to hold the Persians in check in Nisibis. The Balkan provinces were left denuded of troops, however, and were devastated by invasions of Slavs and Bulgars; to protect Constantinople and its vicinity against them, the emperor built the Anastasian Wall, extending from the Propontis to the Euxine. 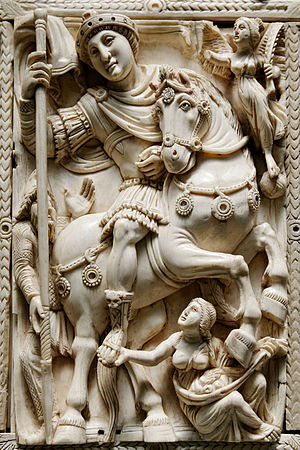 The Barberini ivory, a 6th-century ivory diptych representing either Anastasius or Justinian I.

The Emperor was a convinced Miaphysite, following the teachings of Cyril of Alexandria and Severus of Antioch who taught "One Incarnate Nature of Christ" in an undivided union of the Divine and human natures, but his ecclesiastical policy was moderate; he endeavoured to maintain the principle of the Henotikon of Zeno and the peace of the church. It was rebellious demonstrations of the Byzantine populace, that drove him in 512 to abandon this policy and adopt Miaphysitic programme. His consequent unpopularity in the European provinces was utilized by an ambitious man, named Vitalian, to organize a dangerous rebellion, in which he was assisted by a horde of "Huns" (514–515); it was finally suppressed by a naval victory won by the general Marinus.

The Anonymous Valesianus tells an account about his choosing of a successor: Anastasius could not decide which of his three nephews should succeed him, so he put a message under a couch and had his nephews take seats in the room, which also had two other seats; he believed that the nephew to sit on the special couch would be his proper heir. However, two of his nephews sat on the same couch, and the one with the concealed message remained empty.

Then, after putting the matter to God in prayer, he determined that the first person to enter his room the next morning should be the next Emperor, and that person was Justin, the chief of his guards. In fact, Anastasius probably never thought of Justin as a successor, but the issue was decided for him after his death. At the end of his reign, he left the Imperial treasury richer by 23,000,000 solidi or 320,000 pounds of gold.[4]

Anastasius died childless in Constantinople on 9 July 518 (some sources say 8 or 10 July) and was buried at the Church of the Holy Apostles.

Anastasius is known to have had a brother named Flavius Paulus, who served as Roman consul in 496.[5] A sister-in-law, known as Magna, was mother to Irene and mother-in-law to Olybrius. This Olybrius was son of Anicia Juliana and Areobindus Dagalaiphus Areobindus.[6] The daughter of Olybrius and Irene was named Proba. She married Probus and was mother to a younger Juliana. This younger Juliana married another Anastasius and was mother of Areobindus, Placidia, and a younger Proba.[7] Another nephew of Anastasius was Flavius Probus, Roman consul in 502.[8] Caesaria, sister of Anastasius, married Secundinus. They were parents to Hypatius and Pompeius.[8] Flavius Anastasius Paulus Probus Moschianus Probus Magnus, Roman Consul in 518 also was a great-nephew of Anastasius. His daughter Juliana later married Marcellus, a brother of Justin II.[7] The extensive family may well have included viable candidates for the throne.[9]

The main elements of the complex monetary system of the early Byzantine Empire, which suffered a partial collapse in the 5th century, were revived by Emperor Anastasius I (491–518) in 498. The new system involved three denominations of gold (the solidus and its half and third) and five of copper (the follis, worth 40 nummi and its fractions down to a nummus).

A 40 nummi coin of Anastasius is depicted on the obverse of the Macedonian 50 denars banknote, issued in 1996.[10]