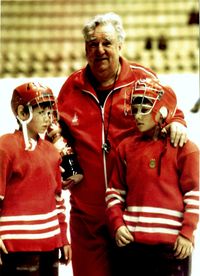 Anatoli Vladimirovitch Tarasov (Russian: Анато́лий Влади́мирович Тара́сов; 10 December 1918 in Moscow, Soviet Union - 23 June 1995 in Moscow, Russia) was an ice hockey player and coach. Tarasov is considered "the father of Russian hockey" and established the Soviet Union national team as "the dominant force in international competition".[1] He was one of the first Russians to be inducted into the Hockey Hall of Fame, having been inducted in 1974 in the builders category. Tarasov also played and managed in the sport of football, but is best known for his work in developing the USSR's ice hockey program.

After World War II, Tarasov was asked to put together a hockey program from scratch. He helped found a hockey department at the Red Army's sports club, CSKA Moscow with little more than several old hockey rulebooks. Before then, the most popular ice sport in Russia and the Soviet Union was bandy, a sport similar to field hockey, but played on ice. The Russian style of hockey, with its emphasis on skating skill, offense and passing, is still heavily influenced by bandy.[2]

When hockey was introduced in the USSR, Tarasov, like the rest of the nation, fell in love with the game. It was his ideals and philosophies that shaped the Russian game into what it is today- fast, graceful, non-individualistic, and patriotic. To him, real teamwork was based on a common aim- comradeship and caring for each team member. This is why he introduced a rule that in order to make the line-up the team had to approve of each player

Anatoli devised many new training techniques. Most of them centered on passing, for he felt passing was the key to their success, "after all, the ultimate aim of a pass was to get a free player. So if our opponents make 150 passes in a game against our 270, this means we had 120 more playing opportunities."

Tarasov's practices included the use of pylons and simple drills that would have looked silly to Canadians, but to the Russians they had great meaning as they looked to perfect each skill. While performing these he had his players in constant motion. He called this the assembly method.

Many great players developed under his system in the 1960s. Among these were heroes like: Vitaly Davydov, Anatoli Firsov, Vyacheslav Starshinov, Veniamin Alexandrov, Alexander Ragulin, Alexander Yakushev, Konstantin Loktev, and goalie, Viktor Konovalenko. Then these were followed by other greats who would represent the Soviet Union in the 1972 Summit Series against Canada. These included: Boris Mikhailov, Vladimir Petrov, Valeri Vasiliev, Alexander Maltsev, Valeri Kharlamov, and a brilliant young goaltender named Vladislav Tretiak.

Tarasov was a big factor in the development of Tretiak, who was destined to become one of the most skillful and cherished goalies in international history. In the earliest days of his career, Tarasov had him doing three practices a day as hard as possible while using the maximum consumption of oxygen (MCO). In one instance a Swedish player came to practice in the USSR with Tarasov, but he couldn't last. He reportedly said, "We Swedes don't' grow up to practice like this. I don't want to die."

According to Tretiak, "If I let in just one puck, Tarasov would ask me the next day "What's the matter?" If it was my fault (and it usually appears to be the goalkeeper's fault), my punishment would follow immediately. After everybody else had gone home I had to do hundreds of lunges and somersaults. I could have cheated and not done them at all, since nobody was watching me- the coaches had gone home too! But I wouldn't even have considered doing one less lunge or somersault. I trusted Tarasov, trusted his every word, even when he criticized me for letting the pucks in my net during practice."

At CSKA Moscow, he won 19 Soviet titles, including all but five from 1955 to 1975 and three instances of winning four titles in a row. He helped lead the Soviet national team to 9 straight world championships, including 3 Olympic gold medals (for most of his tenure, the Olympic championship was considered the world championship). After the 1972 Winter Olympics, Tarasov was fired.[3] Tarasov was known for his ruthless training methods, tough discipline among his players and innovative, instinctive decisions. Many of his methods are continued by his daughter Tatiana Tarasova.

Having helped to build the Soviet hockey program from scratch, Tarasov became the first Soviet to be enshrined in the Hockey Hall of Fame in Toronto, being enshrined as a builder.

Today, the Kontinental Hockey League has a division bearing his name, recognizing his role in the development of ice hockey in the USSR and eventually Russia.

Tarasov when referencing Canada, the Soviet Union's long time rival famously made the quote ""The Canadians battled with the ferocity and intensity of a cornered animal," said Russian coach Anatoli Tarasov. "Our players were better conditioned physically and stronger in skills then the Canadian professionals. But we could not match them in heart and desire, always the strongest part of the Canadian game."