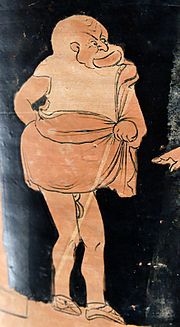 Ancient Greek comedy was one of the final three principal dramatic forms in the theatre of classical Greece (the others being tragedy and the satyr play). Athenian comedy is conventionally divided into three periods, Old Comedy, Middle Comedy, and New Comedy. Old Comedy survives today largely in the form of the eleven surviving plays of Aristophanes, while Middle Comedy is largely lost, i.e. preserved only in relatively short fragments by authors such as Athenaeus of Naucratis. New Comedy is known primarily from the substantial papyrus fragments of Menander.

The philosopher Aristotle wrote in his Poetics (c. 335 BC) that comedy is a representation of laughable people and involves some kind of blunder or ugliness which does not cause pain or disaster.[1] C. A. Trypanis wrote that comedy is the last of the great species of poetry Greece gave to the world.[2]

The Alexandrine grammarians, and most likely Aristophanes of Byzantium in particular, seem to have been the first to divide Greek comedy into what became the canonical three periods:[3] Old Comedy (ἀρχαία archaia), Middle Comedy (μέση mese) and New Comedy (νέα nea). These divisions appear to be largely arbitrary, and ancient comedy almost certainly developed constantly over the years.[4]

The most important Old Comic dramatist is Aristophanes Born in 446 B.C., whose works, with their pungent political satire and abundance of sexual and scatological innuendo, effectively define the genre today. Aristophanes lampooned the most important personalities and institutions of his day, as can be seen, for example, in his buffoonish portrayal of Socrates in The Clouds, and in his racy anti-war farce Lysistrata. It is nonetheless important to realize that he was only one of a large number of comic poets working in Athens in the late 5th century, his most important contemporary rivals being Hermippus and Eupolis.

The Old Comedy subsequently influenced later European writers such as Rabelais, Cervantes, Swift, and Voltaire. In particular, they copied the technique of disguising a political attack as buffoonery. The legacy of Old Comedy can be seen today in political satires such as Dr. Strangelove and in the televised buffoonery of Monty Python and Saturday Night Live.[5][6][need quotation to verify] 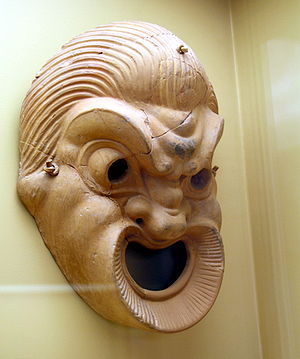 The line between Old and Middle Comedy is not clearly marked chronologically, Aristophanes and others of the latest writers of the Old Comedy being sometimes regarded as the earliest Middle Comic poets. For ancient scholars, the term may have meant little more than "later than Aristophanes and his contemporaries, but earlier than Menander". Middle Comedy is generally seen as differing from Old Comedy in three essential particulars: the role of the chorus was diminished to the point where it had no influence on the plot; public characters were not impersonated or personified onstage; and the objects of ridicule were general rather than personal, literary rather than political. For at least a time, mythological burlesque was popular among the Middle Comic poets. Stock characters of all sorts also emerge: courtesans, parasites, revellers, philosophers, boastful soldiers, and especially the conceited cook with his parade of culinary science.

Because no complete Middle Comic plays have been preserved, it is impossible to offer any real assessment of their literary value or "genius". But many Middle Comic plays appear to have been revived in Sicily and Magna Graecia in this period, suggesting that they had considerable widespread literary and social influence.

Figurine of an actor wearing the mask of a bald-headed man, 2nd century BC.

New Comedy followed the death of Alexander the Great in 323 and lasted throughout the reign of the Macedonian rulers, ending about 260 BC.[7] It is comparable to situation comedy and comedy of manners.[4] The three best-known playwrights belonging to this genre are Menander, Philemon and Diphilus.

Menander was the most successful of the three comedians. His comedies not only provided their audience with a brief respite from reality, they also gave them an accurate but not too detailed picture of life. This led an ancient critic to ask if life influenced Menander in the writing of his plays or if it was vice versa. Unlike his predecessors like Aristophanes, Menander's comedies tended to be more about the fears and foibles of the ordinary man, his personal relationships, family life and social mishaps rather than politics and public life. They were supremely civilized and sophisticated plays which were less farcical and satirical than the plays before them. This sophistication was what made him more successful than the other Greek comedians who wrote in the same genre.

The other two comedians are Philemon and Diphilus. Philemon was a comedian whose comedies dwelt on philosophical issues and Diphilus was a comedian whose comedies were noted for their broad comedy and farcical violence. Philemon's comedies have come down to us in fragments but Diphilus' comedies were translated and adapted by Plautus. Examples of these comedies are Plautus' Asinaria and Rudens. Based on the translation and adaptation of Diphilus' comedies by Plautus, one can conclude that he was skilled in the construction of his plots. 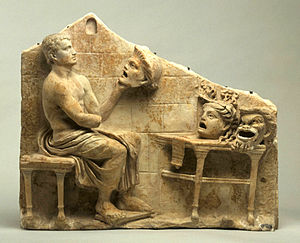 Substantial fragments of New Comedy have survived, but no complete plays. The most substantially preserved text is the Dyskolos ("Difficult Man, Grouch") by Menander, discovered on a papyrus, and first published in 1958. The Cairo Codex (found in 1907) also preserves long sections of plays including Epitrepontes ("Men at Arbitration"), Samia ("The Girl from Samos"), and Perikeiromene ("The Girl who had her Hair Shorn"). Much of the rest of our knowledge of New Comedy is derived from the Latin adaptations by Plautus and Terence.[citation needed]

The playwrights of the Greek New Comedy genre built on a considerable legacy from their predecessors, drawing upon a vast array of dramatic devices, characters and situations their predecessors had developed. Prologues to shape the audience's understanding of events, messengers' speeches to announce offstage action, descriptions of feasts, sudden recognitions, ex machina endings were all established techniques which playwrights exploited and evoked in their comedies.

The satirical and farcical element which featured so strongly in Aristophanes' comedies increasingly diminished in importance as time went on. It was eventually given up more or less completely and was not to be revived. The de-emphasis of the grotesque, whether in the form of choruses, humour or spectacle opened the way for increased representation of daily life and the foibles of recognisable character types.

Unlike their predecessor, Aristophanes, some of whose comedies departed from the Athenian setting or covered mythological themes and subjects, their plays were seldom placed in a setting other than their everyday world (Diphilus was a notable exception). Gods and goddesses in New Comedy were personified abstractions who seldom appeared in their plays. There are generally no miracles or metamorphoses.

The Greek playwrights of this period not only developed a literary style that differed from their predecessors in multiple ways, they also made considerable innovations in literature. Examples of their innovations were the development of a whole series of distinct stereotype characters which were to become the stock characters of Western comedy and the contributions they made to the development of the play.

The cast of Menander's plays included a number of minor characters drawn from a limited number of one-dimensional stock types such as cooks or parasites who introduced familiar jokes and recognisable patterns of speech. Other stock characters in Menander's plays were the senex iratus, or "angry old man", the domineering parent who tries to thwart his son or daughter from achieving wedded happiness, and who is often led into the same vices and follies for which he has reproved his children,the bragging soldier who talked about the number of enemies he killed and how well they'll treat their woman and the kind shrewd prostitute who hid her heart behind a facade of fierce commercialism.

Menander gave stereotype characters a sense that they were character types. In his comedies, they were expected to react the way they were supposed to behave but some resist. These stock characters appear as rich unlayered humans in a new dimension. It was this human dimension that was one of the strengths of Menander's plays. He used these stereotype characters to comment on human life and depict human folly and absurdity compassionately, with wit and subtlety.

For the first time, love became a principal element in the drama. The new comedy depicted Athenian society and the social morality of the period, presenting it in attractive colors but making no attempt to criticize or improve it.[citation needed]

The New Comedy influenced much of Western European literature, primarily through Plautus: in particular the comic drama of Shakespeare and Ben Jonson, Congreve, and Wycherley.[8]

The 5-act structure later to be found in modern plays can first be seen in Menander's comedies. Where in comedies of previous generations there were choral interludes, there was dialogue with song. The action of his plays had breaks, the situations in them were conventional and coincidences were convenient, thus showing the smooth and effective development of his plays.

Much of contemporary romantic and situational comedy descends from the New Comedy sensibility, in particular generational comedies such as All in the Family and Meet the Parents.

Some dramatists overlap into more than one period.