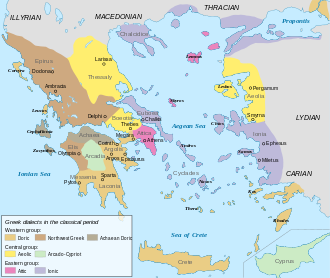 Distribution of Greek dialects in the classical period.[1]

Ancient Greek in classical antiquity, before the development of the κοινή (koiné) "common" language of Hellenism, was divided into several dialects. Most of them are known only from inscriptions, but a few of them, principally Aeolic (Lesbic), Doric, and Ionic, are also represented in the literary canon alongside the dominant Attic form of literary Greek. Likewise, Modern Greek is divided into several dialects, most of them having been derived from Koine Greek.

Ancient Greek literature is written in literary dialects that developed from particular regional or archaic dialects. Ancient Greek authors did not necessarily write in their native dialect, but rather chose a dialect that was suitable or traditional for the type of literature they were writing (see belles-lettres).[10][11] All dialects have poetry written in them, but only Attic and Ionic have full works of prose attested.

Homeric Greek is used in the first epic poems, the Iliad and the Odyssey, and the Homeric Hymns, traditionally attributed to Homer and written in dactylic hexameter. Homeric is a literary dialect with elements of Ionic, Aeolic and Arcadocypriot. Hesiod uses a similar dialect, and later writers imitate Homer in their epics, such as Apollonius Rhodius in Argonautica and Nonnus in Dionysiaca.[12] Homer influenced other types of poetry as well.

Ionic proper is first used in Archilochus of Paros. This dialect includes also the earliest Greek prose, that of Heraclitus and Ionic philosophers, Hecataeus and logographers, Herodotus, Democritus, and Hippocrates. Elegiac poetry originated in Ionia and always continued to be written in Ionic.[13][14]

Doric is the conventional dialect of choral lyric poetry, which includes the Laconian Alcman, the Theban Pindar and the choral songs of Attic tragedy (stasima). Several lyric and epigrammatic poets wrote in this dialect, such as Ibycus of Rhegium and Leonidas of Tarentum. The following authors wrote in Doric, preserved in fragments: Epicharmus comic poet and writers of South Italian Comedy (phlyax play), Mithaecus food writer and Archimedes.

Aeolic is an exclusively poetic lyric dialect, represented by Sappho and Alcaeus for Aeolic (Lesbian) and Corinna of Tanagra for Boeotian. Thessalic, Northwest Doric, Arcado-Cypriot and Pamphylian never became literary dialects and are only known from inscriptions, and to some extent by the comical parodies of Aristophanes and lexicographers.

The Attic orators, Lysias, Isocrates, Aeschines, and Demosthenes, the philosophers Plato and Aristotle and the historian Xenophon wrote in Attic proper. Thucydides wrote in Old Attic. The tragic playwrights Aeschylus, Sophocles, and Euripides wrote in an artificial poetic language,[15] and the comic playwright Aristophanes writes in a language with vernacular elements.

The ancients classified the language into three gene or four dialects, Ionic proper, Ionic (Attic), Aeolic, Doric and later a fifth one, Koine.[16][17] Grammarians focus mainly on the literary dialects and isolated words. Historians may classify dialects on mythological/historical reasons rather than linguistic knowledge. According to Strabo, "Ionic is the same as Attic and Aeolic the same as Doric - Outside the Isthmus, all Greeks were Aeolians except the Athenians, the Megarians and the Dorians who live about Parnassus - In the Peloponnese, Achaeans were also Aeolians but only Eleans and Arcadians continued to speak Aeolic".[18] However, for most ancients, Aeolic was synonymous with literary Lesbic.[19] Stephanus of Byzantium characterized Boeotian as Aeolic and Aetolian as Doric.[20] Remarkable is the ignorance of sources, except lexicographers, on Arcadian, Cypriot and Pamphylian.

Finally, unlike Modern Greek[21] and English, Ancient Greek common terms for human speech ( 'glôssa',[22] 'dialektos',[23] 'phônê'[24] and the suffix '-isti' ) may be attributed interchangeably to both a dialect and a language. However, the plural 'dialektoi' is used when dialects and peculiar words are compared and listed by the grammarians under the terms 'lexeis'[25] or 'glôssai'.[26]

The dialects of Classical Antiquity are grouped slightly differently by various authorities. Pamphylian is a marginal dialect of Asia Minor and is sometimes left uncategorized. Mycenaean was deciphered only in 1952 and so is missing from the earlier schemes presented here:

Loss of intervocalic s ans consonantal i and w from Proto-Greek brought two vowels together in hiatus, a circumstance often called a "collision of vowels".[28] Over time, Greek speakers would change pronunciation to avoid such a collision, and the way that vowels changed determined the dialect.

For example, the word for the "god of the sea" (regardless of the culture and language from which it came) was in some prehistoric form *poseidāwōn (genitive *poseidāwonos). Loss of the intervocalic *w left poseidāōn, which is found in both Mycenaean and Homeric dialects. Ionic Greek changed the *a to an e (poseideōn), while Attic Greek contracted it to poseidōn. It changed differently in other dialects:[citation needed]

The changes appear designed to place one vowel phoneme instead of two, a process called "contraction", if a third phoneme is created, and "hyphaeresis" ("taking away") if one phoneme is dropped and the other kept. Sometimes, the two phonemes are kept, sometimes modified, as in the Ionic poseideōn.

A vowel shift differentiating the Ionic and Attic dialects from the rest was the shift of ā to ē. In Ionic, the change occurred in all positions, but in Attic, it occurred almost everywhere except after e, i, and r. Homeric Greek shows the Ionic rather than the Attic version of the vowel shift for the most part. Doric and Aeolic show the original forms with ā.[29]

Another principle of vocalic dialectization follows the Indo-European ablaut series or vowel grades. The Proto-Indo-European language could interchange e (e-grade) with o (o-grade) or use neither (zero-grade). Similarly, Greek inherited the series, for example, ei, oi, i, which are e-, o- and zero-grades of the diphthong respectively. They could appear in different verb forms (leipo "I leave", leloipa "I have left", elipon "I left") or be used as the basis of dialectization: Attic deiknumi "I point out" but Cretan diknumi.

The ancient Greek dialects were a result of isolation and poor communication between communities living in broken terrain. All general Greek historians point out the influence of terrain on the development of the city-states. Often, the development of languages dialectization results in the dissimilation of daughter languages. That phase did not occur in Greek; instead the dialects were replaced by Standard Greek.

"… long after Attic had become the norm of literary prose, each state employed its own dialect, both in private and public monuments of internal concern, and in those of a more… interstate character, such as… treaties…."

In the first few centuries BC, regional dialects replaced local ones: Northwest Greek koine, Doric koine and Attic koine. The last came to replace the others in common speech in the first few centuries AD. After the division of the Roman Empire into the east and the west the earliest Modern Greek prevailed. The dialect distribution was then as follows:

According to some scholars, Tsakonian is the only modern Greek dialect that descends from Doric rather than the Koine.[33] Others believe it to be the descendant of the local Doric-influenced variant of the Koine[citation needed].