From Infogalactic: the planetary knowledge core
Jump to: navigation, search
This article is about the activity in general. For buildings in which it was carried out, see Thermae. 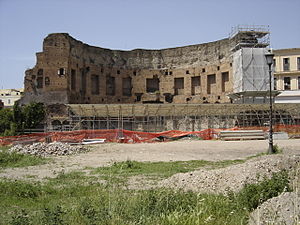 Some remains of the Baths of Trajan

Bathing was one of the most common daily activities in Roman culture, and was practiced across a wide variety of social classes. Though many contemporary cultures see bathing as a very private activity conducted in the home, bathing in Rome was a communal activity. While the extremely wealthy could afford bathing facilities in their homes, most people bathed in the communal baths thermae. In some ways, these resembled modern-day spas. The Romans raised bathing to a high art as they socialized in these communal baths. Communal baths were also available in temples such as The Imperial Fora. Courtship was conducted, as well as sealing business deals, as they built lavish baths on natural hot springs. Such was the importance of baths to Romans that a catalogue of buildings in Rome from 354 AD documented 952 baths of varying sizes in the city.[1] 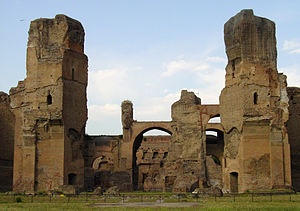 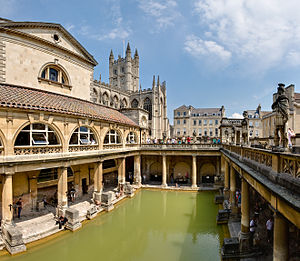 Although wealthy Romans might set up a bath in their town houses or in their country villas, heating a series of rooms or even a separate building especially for this purpose called amphiheaters, and soldiers might have a bathhouse provided at their fort (as at Chesters on Hadrian's Wall, or at Bearsden fort), they still often frequented the numerous public bathhouses in the cities and towns throughout the empire.

Small bathhouses, called balneum (plural balnea), might be privately owned, but they were public in the sense that they were open to the populace for a fee. Larger baths called thermae were owned by the state and often covered several city blocks. The largest of these, the Baths of Diocletian, could hold up to 3,000 bathers. Fees for both types of baths were quite reasonable, within the budget of most free Roman males.

Bathing in Greek and Roman times

Some of the earliest descriptions of western bathing practices came from Greece. The Greeks began bathing regimens that formed the foundation for modern spa procedures. These Aegean people utilized small bathtubs, wash basins, and foot baths for personal cleanliness. The earliest such findings are the baths in the palace complex at Knossos, Crete, and the luxurious alabaster bathtubs excavated in Akrotiri, Santorini; both date from the mid-2nd millennium BC. They established public baths and showers within their gymnasium complexes for relaxation and personal hygiene. Greek mythology specified that certain natural springs or tidal pools were blessed by the gods to cure disease. Around these sacred pools, Greeks established bathing facilities for those desiring healing. Supplicants left offerings to the gods for healing at these sites and bathed themselves in hopes of a cure. The Spartans developed a primitive steam bath. At Serangeum, an early Greek balneum (bathhouse, loosely translated), bathing chambers were cut into the hillside from which the hot springs issued. A series of niches cut into the rock above the chambers held bathers' clothing. One of the bathing chambers had a decorative mosaic floor depicting a driver and chariot pulled by four horses, a woman followed by two dogs, and a dolphin below. Thus the early Greeks used natural features, but expanded them and added their own amenities, such as decorations and shelves. During later Greek civilization, bathhouses were often built in conjunction with athletic fields.

The Romans emulated many of the Greeks' bathing practices, and surpassed them in the size of their baths. As in Greece, the Roman bath became a focal center for social and recreational activity. With the expansion of the Roman Empire, the idea of the public bath spread to all parts of the Mediterranean and into regions of Europe and North Africa. By constructing aqueducts, the Romans had enough water not only for domestic, agricultural, and industrial uses, but also for their leisurely pursuits. Aqueducts provided water that was later heated for use in the baths. Today, the extent of the Roman bath is revealed at ruins and in archaeological excavations in Europe, Africa, and the Middle East.[2]

These Roman baths varied from simple to exceedingly elaborate structures, and they varied in size, arrangement, and decoration. In taking a Roman bath, the bather induced sweating by gradually exposing himself to increasing temperatures. To accommodate this ritual, all Roman bathhouses contained a series of rooms which got progressively hotter. Most contained an apodyterium—a room just inside the entrance where the bather stored his clothes. Next, the bather progressed into the frigidarium (cold room) with its tank of cold water, the tepidarium (warm room), and finally the caldarium (hot room). The caldarium, heated by a brazier underneath the hollow floor, contained cold-water basins which the bather could use for cooling. After taking this series of sweat and/or immersion baths, the bather returned to the cooler tepidarium for a massage with oils and final scraping with metal implements. Some baths also contained a laconium (a dry, resting room) where the bather completed the process by resting and sweating.[2]

The layout of Roman baths contained other architectural features of note. Because wealthy Romans brought slaves to attend to their bathing needs, the bathhouse usually had three entrances: one for men, one for women, and one for slaves. The preference of symmetry in Roman architecture usually meant a symmetrical facade, even though the women's area was usually smaller than the men's because of fewer numbers of patrons. Usually solid walls or placement on opposite sides of the building separated the men's and women's sections. Roman bathhouses often contained a courtyard, or Palaestra, which was an open-air garden used for exercise. In some cases the builders made the palestra an interior courtyard, and in other cases the builders placed the palestra in front of the bathhouse proper and incorporated it into the formal approach. Sometimes the palestra held a swimming pool. Most often a colonnade outlined the palestra's edges.[2]

Republican bathhouses often had separate bathing facilities for women and men, but by the 1st century AD mixed bathing was common and is a practice frequently referred to in Martial and Juvenal, as well as in Pliny and Quintilian. However, gender separation might have been restored by Emperor Hadrian[3] but there is evidence it wasn't. To many Roman moralists, baths illustrated how far the Rome of their own day had fallen into decline and so became a negative image; Cato the Elder publicly attacked Scipio Africanus for his use of the bathhouses.

The Romans also developed baths in their colonies, taking advantage of the natural hot springs occurring in Europe to construct baths at Aix and Vichy in France, Bath and Buxton in England, Aachen and Wiesbaden in Germany, Baden, Austria, and Aquincum, Hungary, among other locations. These baths became centers for recreational and social activities in Roman communities. Libraries, lecture halls, gymnasiums, and formal gardens became part of some bath complexes. In addition, the Romans used the hot thermal waters to relieve their suffering from rheumatism, arthritis, and overindulgence in food and drink.[2]

Thus the Romans elevated bathing to a fine art, and their bathhouses physically reflected these advancements. The Roman bath, for instance, included a far more complex ritual than a simple immersion or sweating procedure. The various parts of the bathing ritual (undressing, bathing, sweating, receiving a massage and resting), required separate rooms which the Romans built to accommodate those functions. The segregation of the sexes and the additions of diversions not directly related to bathing also had a direct impact on the shape and form of bathhouses. The elaborate Roman bathing ritual and its resultant architecture served as precedents for later European and American bathing facilities. Formal garden spaces and opulent architectural arrangement equal to those of the Romans re-appeared in Europe by the end of the eighteenth century. Major American spas followed suit a century later.[2]

While the baths were enjoyed by almost every Roman, there were those who criticized them. The water was not renewed often and the remains of oil, dirt or even excrement were kept warm, providing a milieu for bacteria.[4] The emperor Marcus Aurelius complained about the dirtiness.[5] Celsus,[6] while commending its therapeutic virtues, warns not to go with a fresh wound, because of the risk of gangrene. And it was said that 'Wine, women, warmth, to life destruction give, But it is by wine, women, warmth that we live' [7] The objections of the philosopher Seneca were instead about the associated noise that interrupted his work when he resided above a bath.[8]