Anderson is a city in and the county seat of Anderson County, South Carolina, United States.[1] The population was 26,686 at the 2010 census,[2] and the city was the center of an urbanized area of 75,702.[3] It is one of the principal cities in the Greenville-Mauldin-Anderson Metropolitan Statistical Area, contiguous with Anderson County, which had a population of 187,126 at the 2010 census. It is further included in the larger Greenville-Spartanburg-Anderson, South Carolina Combined Statistical Area, with a total population of 1,266,995, at the 2010 census. Anderson is just off Interstate 85 and is 120 miles (190 km) from Atlanta and 140 miles (230 km) from Charlotte.

Anderson is the smallest of the three primary cities that makes up the Upstate region and is nicknamed "The Electric City" and "The Friendliest City in South Carolina". Anderson's spirit and quality of life have earned national recognition as Anderson County was named an "All-America City" in 2000.

Anderson is the home of Anderson University, a selective private comprehensive university of approximately 3,000 undergraduate and graduate students.

Anderson was named for a Revolutionary War hero, Robert Anderson. General Anderson and Andrew Pickens surveyed the land in this area. The Cherokee Native Americans lived in this area until 1777. The land was then ceded to South Carolina by the Cherokee in a treaty negotiated by Pickens. This area was then called the Pendleton District for official purposes. In 1826, the Pendleton District was divided into two districts  — Anderson and Pickens. Because the town of Pendleton was at the top of the county, too close to the Pickens border, a new courthouse was built at the center of the county. A small town, named Anderson Courthouse, grew up around the courthouse, and this community eventually became known as Anderson. Anderson was incorporated by an act of the state legislature, December 19, 1833. The original courthouse was built of logs, but 10 years later, a courthouse made of bricks was erected to replace it. A still-standing Anderson County Courthouse, built in 1898, now faces the current courthouse and is built on the site of the original. 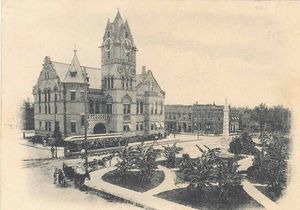 The settlers of this area were mostly Scots-Irish who came from Virginia and Pennsylvania to farm. Farmers grew corn and raised hogs. Much later, cotton became the cash crop of the area. By the late 19th century, the Anderson area was filled with numerous textile mills. Due to the innovation of Anderson engineer William Whitner, electricity could be conducted by wire to mills throughout the county. Anderson was the first city in the United States to have a continuous supply of electric power, which was supplied by a water mill located in the high shoals area of the Rocky River in Anderson County. The first cotton gin in the world to be operated by electricity was built in Anderson County in 1897. Several areas of Anderson are named in Whitner's honor, including a downtown street. Anderson became known as "The Electric City", a nickname that it still holds today.

On November 14, 1931, the famous aviator Amelia Earhart flew into the Anderson airport in her Pitcairn PCA-2 Autogyro, attracting over 1,000 spectators. Mayor G.T. McGregor and other city leaders met her at the airport. She was piloting the Autogyro on a nationwide tour promoting Beech-Nut products. Earhart landed at the original Anderson County Airport, founded in 1928 on the highest land Anderson County owned. This "airport," a mere grass strip originally planned as an emergency landing field, later became a joint city-county facility where planes delivering air mail landed. The field functioned until the land for the current airport on Highway 24 was purchased and developed in the mid-1930s.[4][5]

Anderson was the site of some of the 2008 filming of Leatherheads.

Anderson is located at Lua error in Module:Coordinates at line 668: callParserFunction: function "#coordinates" was not found. (34.514506, −82.648944),[7] in the northwest corner of South Carolina on the Piedmont plateau. Anderson is a 1-hour drive from the Blue Ridge Mountains and a 4-hour drive from the South Carolina coast. Anderson lies roughly at the midpoint of the busy I-85 corridor between Atlanta, Georgia, and Charlotte, North Carolina.

Downtown Anderson is located in the center of Anderson County, approximately 8 miles (13 km) south of Interstate 85. Downtown is bounded to the north by Greenville Street, to the east by Fant Street, to the south by Franklin Street, and to the west by Towers Street.

Many of the original buildings still line the streets but are in different stages of revitalization, with some recently completed while others are still under construction. One of the more prominent structures remodeled was the Chiquola Hotel, which has been transformed into condominiums with retail space on the first floor. In recent years, a new courthouse was built directly across from the old courthouse which served the county until 1995 and is still used for some government functions.

There have been several developments in downtown over the past decade. Parts of the original brick street were resurfaced on Main Street, and most buildings received new paint jobs. A large new library was built at Society Street and McDuffie Street, and the previous library was remodeled and turned into the county museum. A new farmers market and art gallery were built at Tribble Street next to the old railroad station. There is a new parking garage at the corner of Whitner Street and Murray Avenue and also the recently built Benson Hotel. A number of new projects have been planned for the area, with a new park covering the old Belk site on Whitner Street the newest one, while expansion projects are being considered for the Coleman Recreation Center just outside downtown.

Traffic is regularly closed off Thursday afternoons on Main Street for the downtown block party, and also for different events throughout the year such as the Chili Cook-off and Christmas Parade. While places such as Mellow Mushroom, Wendy's, and Subway operate in downtown, the majority of stores are still more traditional mom-and-pop type stores.

Anderson's economy revolves around manufacturing. Anderson has over 230 manufacturers, including 22 international companies. In the county, Anderson has a thriving business climate. The top major industries in Anderson include manufacturers of automotive products, metal products, industrial machinery, plastics, publishing, and textiles. Two industries that many times interconnect are the plastic and automotive sectors. There are more than 27 BMW suppliers in the Upstate region, which is recognized internationally as an automotive supplier hub. The plastics industry has a strong presence in the Upstate, with 244 plastic companies located within the 10 counties of the state's northwest corner. Anderson County, in particular, has 11 automotive suppliers and is a major player in the plastic industry, with 27 plastics companies located within its borders. It has one unionized company in the area.

AnMed Health is one of the top employers in the county and the primary healthcare network for Anderson. AnMed Health Medical Center is the main medical facility, offering all the amenities of a standard hospital, as well as a heart and vascular center, and stroke/neurological center. Located two and a half miles north of the facility is the AnMed Health Campus which includes a women's and children's hospital, minor care, cancer center, speech and occupational therapy, and more. The AnMed Rehabilitation Hospital is located between the two facilities. AnMed has recently received national attention being awarded the "National Presidents Circle Award," and the "American College of Cardiology Foundation’s 2012 NCDR ACTION Registry–GWTG Platinum Performance Achievement Award."

In addition to these three network hospitals, AnMed also operates a number of smaller facilities throughout the city and county that range from a free clinic and minor care to doctor's offices.

Anderson has five signed exits on I-85, currently the city's only freeway. Several notable highways pass through the city, including U.S. Route 76 and U.S. Route 178 co-signed along Clemson Boulevard, also known as SC-Bus 28, and U.S. Route 29 leading to Hartwell, Georgia, to the south and Greenville to the north.

In 2011, construction began on a new east-west connector which is approximately three miles long between Clemson Boulevard and South Carolina Highway 81.[9] On August 16, 2010, the connector was voted to have four lanes with turn and bike lanes with a completion date set in October 2012.[10]

On November, 8th, 2013, the East-West Parkway formally opened to traffic.

Anderson has four bus routes (Blue, Green, Red, and Gold) that travel to most major areas of the city, running every hour.[11] and also receives service from Clemson Area Transit (CATS) via the 4U route.[12] The city uses both newer hybrid buses and older style trolleys resembling Anderson's old streetcars. Inter-city bus travel is available through Greyhound Lines, located on West Whitner Street near downtown.

Though the city still doesn't have as extensive a transit system as more modern cities, it is making plans to expand its ventures. The city is currently trying to acquire a full-time office space for a downtown bus transfer center. There is also the potential for growth in the future, including a new line connecting Belton to Anderson.

Anderson is one of the main shopping destinations in The Upstate. Locally owned stores such as Grady's Great Outdoors and Blake & Brady as well as big box stores occupy Anderson, mainly on Clemson Boulevard. Midtowne Park is a shopping center which opened in 2008 that features Kohl's, Dick's Sporting Goods, Staples, AT&T, Hardee's, and Ulta. This spot has gained significant notoriety online due to the fact that the sign at the main entrance has the stores listed in this order (from top to bottom): Kohl's, Staples, Dick's, and photos have circulated Google and social media sites with the caption "Kohl's does WHAT?"[13][14] Other major shopping centers in Anderson include Anderson Mall, North Pointe Centre, Anderson Station, and two WalMart shopping centers.

Anderson Mall is Anderson's largest shopping center. It opened in 1972 and has undergone many expansions. It currently has more than 76 specialty stores thanks to a renovation completed in 2008. The mall is owned by Simon Property Group and anchored by Sears, Belk, Dillards, and JC Penney. Dillards recently opened at the mall in the Fall of 2008 as part of the renovation project. The front of the mall was also remodeled with Books-A-Million relocating to this area, along with several other stores.

Anderson is the central city of an urbanized area with a total population of 70,530 (2000 census). This urban area is within the larger Greenville-Spartanburg metropolitan statistical area.

Anderson is governed using the mayor-council system. The Mayor is elected at-large. The city council consists of eight members. Six are elected from districts and the other two are elected at large.

Anderson has one sister city, as designated by Sister Cities International: