The museum as seen from Balloon Fiesta Park

The Anderson-Abruzzo Albuquerque International Balloon Museum is a museum dedicated to the worldwide history, science, and art of all types of ballooning and lighter-than-air flight. It is located in Albuquerque, New Mexico, USA, and is situated just outside the grounds used for the Albuquerque International Balloon Fiesta, the world's largest yearly balloon fiesta, and is named for Ben Abruzzo and Maxie Anderson, two Albuquerque natives who established several ballooning firsts, such as crossing oceans and continents.

Opened on October 1, 2005, it is owned by the city of Albuquerque and is a collaborative project of the Anderson-Abruzzo International Balloon Museum Foundation and the City of Albuquerque's Cultural Services Division. It is a 59,000-square-foot (5,500 m2) facility with class rooms, conference rooms, and many exhibits on the history of ballooning, including items from famous balloonists such as Ed Yost, Joseph Kittinger, and Ben Abruzzo. 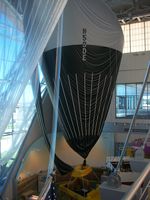