Anderston (Scots: Anderstouncode: sco is deprecated ,[1] Scottish Gaelic: Baile Aindrea)[2] is a district in the Scottish city of Glasgow. It is on the north bank of the River Clyde and forms the south western edge of the city centre. It was an independent burgh of barony from 1824 until it was incorporated into the City of Glasgow in 1846.

The district is served by Anderston railway station.

The land on which the present day district of Anderston stands was once known as the Bishops Forest. These lands, situated to the west of medieval Glasgow, were granted to the Bishop of Glasgow by King James II of Scotland in 1450.

The lands of Stobcross, which occupied part of this area, were the property of the Anderson family from the late 16th century, and here they built their mansion, Stobcross House. Tradition has it that the name came from a wooden cross or ‘stob’ which marked the spot. Stobcross House was demolished in 1875 to make way for Queen’s Dock.

Anderston was originally an unproductive section of land which was feued out for weavers cottages in 1725 by James Anderson of Stobcross House.[3] It was named Anderson Town in his honour, later becoming Anderston. It began close to the Gushet farm, which became Anderston Cross and today is the site of the Kingston Bridge which carries the M8 motorway. Ownership of the area changed in 1735 when it was taken over by John Orr. Under his stewardship, dyeing and bleaching was added to weaving and soon large steam-driven looms took over from hand weaving. In those days Anderston had bleachfields down by the river and Main Street consisted of weavers cottages along both sides. As business and trade increased so did the size of Anderston. Finnieston, a nearby village was established in 1768, named for the Rev. John Finnie, the Orr family tutor and soon a busy community was growing up. From its origins as a weaver's village, the area became an industrial centre with the growth of Glasgow's cotton industry. Other industries included engineering, brewing and glassmaking. This led to a large Irish immigrant population moving to the area, and they formed a key part in the character of the area. Thomas Lipton opened his first shop in Stobcross Street. The area would also later become the home of Italian and Asian populations.

By 1791, the population of the village of Anderston was around 4,000. In the countryside surrounding the village there were many country estates such as Hydepark and Lancefield. These would later be commemorated in the street names of Anderston as the area expanded and became urbanized in the 19th century. The eastern boundary of Anderston was for many years marked by Royalty Stones number 208 and 209, on the north and south sides of the present Argyle Street. The Blythswood Burn had originally flowed through the site, and had marked the eastern boundary of the Stobcross lands. The Royalty Stones stood on the site from around 1782 until they were removed during the Comprehensive Development which took place in the area in the 1960s and 1970s.

By the late 18th century, Anderston was a thriving community, with its population employed mostly in weaving and related industries such as bleaching, dyeing and printing. Other industries were also thriving by this period, such as the Delftfield Pottery (established 1751), the Anderston Brewery (1762), and the Verreville Glassworks (1776). The areas first church, the Anderston Relief Church in Heddle Place, was erected in 1770.

The area of Anderston now known as Cranstonhill was known in ancient times as Drumother Hill. It became corrupted to Drumover Hill, the reason for this being a myth that it was the place where vagabonds were escorted to, to the tune of the "Rogues' March", when they were drummed out of town. Alexander Peden prophesied in the 17th century that this hill would one be day be the site of the 'Cross of Glasgow.' At that time, the hill stood in open countryside a few miles from the Burgh of Glasgow.

In the early 19th century, Henry Houldsworth, a cotton mill owner, bought the lands of Cranstonhill and a villa which stood there. The estate would later give way to reservoirs, bleachworks and then tenement housing. In 1824, when Anderston's population stood at around 10,000, the town was made a Burgh of Barony. The first Town Council was elected, with Henry Houldsworth being chosen as the first Provost of Anderston. The council also included three Bailies, eleven councillors and a Treasurer. The Burgh motto was the Latin Alter Alterius Auxilio Veget, which roughly translates as 'the one flourishes by the help of the other.' However, Anderston's status as an independent Burgh would not last long. In 1846, when the Burgh's population stood at 16,000, it was incorporated into the City of Glasgow.

During the rest of the 19th century, the area continued to grow, and new industries developed, such as shipbuilding, iron-founding, tool manufacturing, and engineering. The close proximity to the docks on the River Clyde meant that Anderston also became an ideal place for the establishment of whisky bonds, grain stores and timber yards. This period also saw the establishment of the famous Cranstonhill and Bilsland Bakeries (in 1865 and 1882 respectively).

The rapid development of industry in the area led to a demand for working-class housing, and most of the Anderston area was built in the late 19th century, comprising the solid stone tenement buildings which are synonymous with Glasgow. This was also the period when many of Anderston's churches were built to serve the growing community. These included St Mark's Lancefield (1850), Anderston Parish Church (1865), and St Patrick's RC Church (built in 1898 and now one of the few 19th century buildings still remaining in Anderston).

By the close of the 19th century shipping and associated industries had taken over the area and spread to fill the parkland beside the Clyde and the area was densely populated and characterised by back-street workshops and closely packed tenements.[3] 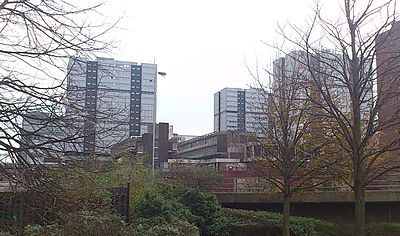 The Anderston Centre (now known as Cadogan Square), built at the turn of the 1970s, was the flagship development of the regenerated Anderston, but would ultimately prove controversial.

Throughout the first half of the 20th century, even though it had been a part of Glasgow since 1846, Anderston remained in many respects like a large village within a city. There was a strong sense of local identity (which still survives to this day), with the area being well-served and self-contained in regard to shops, cinemas and places of employment. Like many other similar areas of Glasgow, relatives and friends tended to live locally (often in the same building), and everyone knew everyone else in the area, to a large extent. But this situation would change in the post-war era.

After World War II, there was a determination by national and local government that something had to be done about the bad housing and over crowding of the inner city areas which existed in most of the major cities in Britain. The Bruce Report of 1945 led to the concept of 'Comprehensive Development' which meant the total demolition of areas of sub standard housing and slums in the city, so that new, planned communities could be built on the cleared ground. In total, 20 Comprehensive Development Areas were designated in Glasgow, with one of them comprising a large part of Anderston.

Although Anderston's housing problems were no worse than many other areas of Glasgow, Anderston was made an area for priority treatment as the need to improve Glasgow's road network had led to the plans for building a motorway through the city. The route of this motorway was to go through Anderston Cross, the traditional heart of the community, and the plan for the comprehensive development of the area was approved in 1961. The new Anderston would therefore be divided into three zones; a Commercial Zone devoted to office space and commerce on the eastern fringe of the city centre, and bordered on the west by the new ring road, a Residential Zone consisting of new housing estates to the immediate east, and an Industrial Zone to the south east.

The work on the road network and the demolition of housing progressed throughout the 1960s. By the following decade, the new Anderston bore little resemblance to the old area. The high density housing and streets full of tenements had been swept away, and most of the residents had been rehoused in places such as Knightswood, Easterhouse, Cumbernauld, Drumchapel and East Kilbride. In 1951, the population had stood at 31,902; by 1971, it had dropped to 9,265 as a result of redevelopment.

The area was much changed irrevocably by the construction of the M8 motorway and Kingston Bridge, whose tangle of concrete flyovers and pedestrian bridges destroyed much of the western fringes of Anderston, including Anderston Cross itself, which was replaced by the massive concrete Anderston Centre - a typical 1960s megastructure combining shops, offices, council housing and a bus station into one development. The idea was not a success, and by the 1980s the centre's many covered underpasses and service roads had become a notorious red light district, with prostitution a major activity in both Anderston and neighbouring Blythswood Hill in the evening. 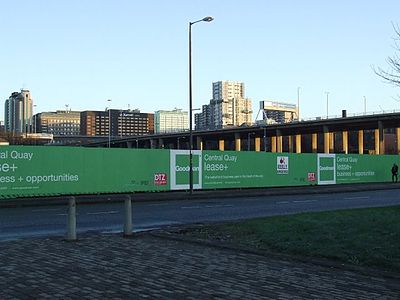 The Anderston Commercial Zone taken from the south bank of the River Clyde, showing the Hilton and Marriott hotels, Dial House, the Argyle Building (under construction) and the Anderston Centre's housing towers

However, with the exponential growth of Glasgow's flourishing new financial district, by the turn of the 21st century, Anderston's fortunes seemed to be improving. New ultra-modern office developments, international hotels and new residential buildings have sprung up, which have improved the look and reputation of the area markedly. After original plans to demolish them, the three tower blocks of the Anderston Centre were saved in favour of refurbishment, after they transferred to the Glasgow West Housing Association. As of 2010 the blocks were being externally reclad to match the design of private developments going up adjacent. In 2011, work began on demolishing much of the original 1960s housing estates to the east of the motorway, and restoring portions of the original street plan.

Anderston Primary School, a non-denominational state school, is located on Port Street in Anderston. The head teacher is Mary McKerrell.[4]

The area is home to football team Anderston Athletic who play in the Glasgow Colleges FA Division 2.