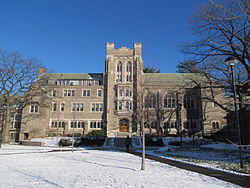 Andover Theological Seminary, the oldest graduate school of theology in the United States, traces its roots to the late 18th century and the desire for a well-educated clergy among Congregationalists. That desire was expressed in the founding of Phillips Academy in 1778 for "the promotion of true Piety and Virtue."

In 1806, a growing split within the Congregational churches, known as the “Unitarian Controversy,” came to a full boil on the campus of Harvard College. The appointment of the Hollis Professorship of Divinity at Harvard had been put off for many years because of tensions between liberals and the more orthodox Calvinists. This theological battle soon divided many of the oldest churches in Massachusetts and began to impact church polity and the hiring of ministers. Then when the Harvard Overseers appointed a well known liberal, Henry Ware, to the Hollis Chair in 1805 the Calvinists withdrew to organize and found a new school, Andover Theological Seminary, in 1807. This act, covered widely in the national press, was one of the significant events that contributed to the split in the denominations and to the eventual founding of the American Unitarian Association in 1825 (which joined the Universalists, founded in 1793, to become the Unitarian Universalist Association in 1961).

Newton Theological Institution began instruction in 1825 at Newton Centre, Massachusetts as a graduate seminary formally affiliated with the group now known as American Baptist Churches USA, the oldest Baptist denomination in America. As the institution developed, it adopted Andover's curricular pattern and shared the same theological tradition of loyalty to the evangelical Gospel and zeal for its dissemination.

Prior to the founding of Andover and Newton, the model for the training of clergy was based on an undergraduate degree (actually the basis for the founding of most of the early colleges in the United States). The graduate model and the three year curriculum with a resident student body and resident faculty pioneered at Andover and Newton has become the standard for almost all of the 140 Protestant theological schools in the country.

Reflecting that zeal, the modern missionary movement began in this country through a group of Andover students known as the Brethren. Both Andover and Newton quickly assumed leadership in the modern mission movement, drawing the two schools into close association of people and ideas. Graduates such as Luther Rice and Hiram Bingham pioneered in Christian missions around the world. Adoniram Judson, an 1810 Andover alumnus, is best known for his work in Burma, where he translated the Bible into Burmese and produced the first Burmese-English dictionary.

In 1908, Harvard Divinity School and Andover attempted to reconcile and for a period of 18 years shared the Cambridge, Massachusetts, campus. The seminary moved its faculty and library to Cambridge and began to develop plans for a formal affiliation with Harvard. However, the Supreme Judicial Court of Massachusetts disallowed the alliance, which resulted in Andover’s relocating to the campus of Newton Theological Institution in 1931.

Alumni of Andover Theological Seminary include the following notables, listed in order of their last year at the Seminary.