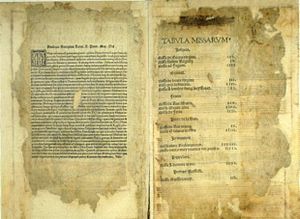 Andrea Antico (also Andrea Antico da Montona, Anticho, Antiquo) (c. 1480 – after 1538) was an Italian music printer, editor, publisher and composer of the Renaissance, of Istrian[1] birth, active in Rome and in Venice.[2] He was the first printer of sacred music in Rome, and the earliest competitor of Venetian Ottaviano Petrucci, who is regarded as the first significant music printer.

Antico was born in Montona in the Republic of Venice (today Motovun in Croatia). His ethnicity is not known; fifteenth century Montona had a mixed population of Italians and Croats.[3] Little documentation has yet come to light regarding his early life, but he may have been active in the diocese of Parenzo (now Poreč) in Istria, based on a papal letter of 1516 which called him a "cleric of the diocese of Parenzo, now living in Rome".[4] His first publication dates from 1510, and was a collection of frottole. Like Petrucci, whose similar Odhecaton had appeared eight years earlier in Venice, he began by publishing popular secular music.

In 1513 he secured papal privileges for printing music in the Papal States; this was the first such privilege to be granted, and shortly after the grant he was given the exclusive right to print organ tablature. This set him up as a competitor of Petrucci, who had similar privileges in the Republic of Venice (the right to print organ tablature in the papal states was originally Petrucci's, but since he had not printed any, the pope transferred it to Antico).[5] A ten-year copyright was added to the printing privilege, although many reprints from Antico's plates and blocks, some from before the expiration of the copyright, were not always attributed to him.[4]

While in Rome, Antico worked in financial partnership with Ottaviano Scotto, and also used the services of printer Antonio Giunta. Antico stayed in Rome until 1518, moving to Venice, where he began working as a printer in 1520. During the period from 1520 to 1522 he worked in partnership with Luca Antonio Giunta. What he did between 1522 and 1533 has not yet been determined, but he resumed his printing activities in 1533, still in Venice, this time working as an employee of Ottaviano Scotto, his previous collaborator from Rome. It has been suggested that Antico spent the years from 1522 to 1533 in Lyon, possibly working with the famous printer there, Jacques Moderne, who was also from Istria.

Antico's last publication, a collection of motets for four voices by Adrian Willaert, is dated 1539, and no information is known about Antico's life after this year.

One of his Roman-period publications, the Liber quindecim missarum of May 9, 1516, contained masses by Josquin des Prez, Pierre de La Rue, Antoine Brumel, Jean Mouton, Antoine de Févin, and Matthaeus Pipelare. This was the first sacred music to be published at Rome itself (Petrucci had published sacred music in Venice more than a decade earlier). Antico told Pope Leo X in the dedication that he had spent three years laboriously preparing the woodcuts for this publication. The graphic artist responsible for the cover page designs as well as the abundant illustrations in the Liber quindecim missarum and elsewhere was probably Giovanbattista Columba.[4]

While in Venice, he published many kinds of music, including frottole by Bartolomeo Tromboncino and Marchetto Cara arranged for voice and lute; French motets and chansons; motets, including a collection of works by Willaert; and some of the first books of madrigals, including collections by Philippe Verdelot and Jacques Arcadelt.

Antico was also a composer, and occasionally included his own frottole in his publications, signing them "Andrea Anticho D.M." They are in a light, fairly simple, and homophonic musical style.

The early music Ensemble Renaissance performs and has recorded a setting of his frottole as part of its "Journey through Dalmatia" and Music of the Old Adriatic program.[7]