Davis had little education. In 1843 he heard lectures in Poughkeepsie on animal magnetism, the precursor of hypnotism, and came to perceive himself as having remarkable clairvoyant powers. In the following year he received, he said, spiritual messages telling him of his life work.[1] He described himself as "the Poughkeepsie Seer".[2] 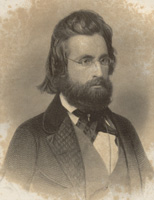 For the next three years (1844–1847) he practiced magnetic healing, a form of therapy regarded as pseudoscience, and in 1847 he published The Principles of Nature, Her Divine Revelations, and a Voice to Mankind, which in 1845 he had dictated while in a trance to his scribe, William Fishbough. He lectured with little success and returned to writing books, publishing about 30 in all including:

Davis was much influenced by Swedenborg and by the Shakers, who reprinted his panegyric praising Ann Lee in the official work, Sketch of Shakers and Shakerism (1884).[1]

In writing his 1845 short story "The Facts in the Case of M. Valdemar", Edgar Allan Poe was informed by Davis's early work after having attended one of his lectures on mesmerism.[3]

Regarding Davis' book The Principles of Nature, Joseph McCabe has noted "There is no need to examine the book seriously. The scientific errors and crudities of it release any person from considering whether there was any element of revelation in it... Moreover, Davis was a palpable cheat. He maintained that up to that date he had read only one book in his life, and that book was a novel. We know from his admirers that this was not true, and any person can recognize in his pages a very crude and badly digested mess of early scientific literature."[5]

Physician James Joseph Walsh was unconvinced Davis was a genuine clairvoyant. Walsh wrote that although Davis stated that he had only ever read one novel, this was not true as he had read Vestiges of the Natural History of Creation and there was evidence he had read books on sociology.[6]

The spiritualist writings of Davis have been criticized by scientists and skeptics for containing inaccuracies and false information. For example, in one case, Davis seemed unaware that water is a compound of oxygen and hydrogen. Researcher Georgess McHargue pointed out that the supposed "scientific" passages from his writings are filled with "gobbledegook as to put it in the class with the most imaginative vintage science fantasy."[7]