Andrew Lang FBA (31 March 1844 – 20 July 1912 ) was a Scottish poet, novelist, literary critic, and contributor to the field of anthropology. He is best known as a collector of folk and fairy tales. The Andrew Lang lectures at the University of St Andrews are named after him.

Lang was born in 1844 in Selkirk, Scottish Borders. He was the eldest of the eight children born to John Lang, the town clerk of Selkirk, and his wife Jane Plenderleath Sellar, who was the daughter of Patrick Sellar, factor to the first Duke of Sutherland. On 17 April 1875, he married Leonora Blanche Alleyne, youngest daughter of C. T. Alleyne of Clifton and Barbados. She was (or should have been) variously credited as author, collaborator, or translator of Lang's Color/Rainbow Fairy Books which he edited.[1]

He was educated at Selkirk Grammar School, Loretto School, and the Edinburgh Academy, as well as the University of St Andrews and Balliol College, Oxford, where he took a first class in the final classical schools in 1868, becoming a fellow and subsequently honorary fellow of Merton College. He soon made a reputation as one of the most able and versatile writers of the day as a journalist, poet, critic, and historian.[2] In 1906, he was elected FBA.[3]

He died of angina pectoris on 20 July 1912 at the Tor-na-Coille Hotel in Banchory, Banchory, survived by his wife. He was buried in the cathedral precincts at St Andrews, where a monument can be visited in the south-east corner of the 19th century section. 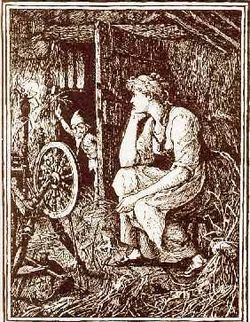 Lang is now chiefly known for his publications on folklore, mythology, and religion. The interest in folklore was from early life; he read John Ferguson McLennan before coming to Oxford, and then was influenced by E. B. Tylor.[4]

The earliest of his publications is Custom and Myth (1884). In Myth, Ritual and Religion (1887) he explained the "irrational" elements of mythology as survivals from more primitive forms. Lang's Making of Religion was heavily influenced by the 18th century idea of the "noble savage": in it, he maintained the existence of high spiritual ideas among so-called "savage" races, drawing parallels with the contemporary interest in occult phenomena in England.[2] His Blue Fairy Book (1889) was a beautifully produced and illustrated edition of fairy tales that has become a classic. This was followed by many other collections of fairy tales, collectively known as Andrew Lang's Fairy Books. In the preface of the Lilac Fairy Book he credits his wife with translating and transcribing most of the stories in the collections.[5] Lang examined the origins of totemism in Social Origins (1903).

Lang was one of the founders of "psychical research" and his other writings on anthropology include The Book of Dreams and Ghosts (1897), Magic and Religion (1901) and The Secret of the Totem (1905).[2] He served as President of the Society for Psychical Research in 1911.[6]

Lang extensively cited nineteenth- and twentieth-century European spiritualism to challenge the idea of his teacher, Tyler, that belief in spirits and animism were inherently irrational. Lang used Tyler's work and his own psychical research in an effort to posit an anthropological critique of materialism.[7]

He collaborated with S. H. Butcher in a prose translation (1879) of Homer's Odyssey, and with E. Myers and Walter Leaf in a prose version (1883) of the Iliad, both still noted for their archaic but attractive style. He was a Homeric scholar of conservative views.[2] Other works include Homer and the Study of Greek found in Essays in Little (1891), Homer and the Epic (1893); a prose translation of The Homeric Hymns (1899), with literary and mythological essays in which he draws parallels between Greek myths and other mythologies; Homer and his Age (1906); and "Homer and Anthropology" (1908).[8] 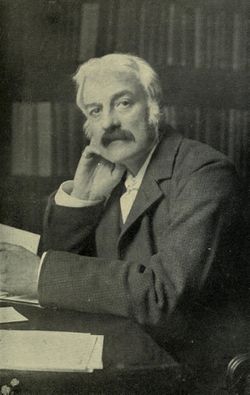 Lang's writings on Scottish history are characterised by a scholarly care for detail, a piquant literary style, and a gift for disentangling complicated questions. The Mystery of Mary Stuart (1901) was a consideration of the fresh light thrown on Mary, Queen of Scots, by the Lennox manuscripts in the University Library, Cambridge, approving of her and criticising her accusers.[2]

He also wrote monographs on The Portraits and Jewels of Mary Stuart (1906) and James VI and the Gowrie Mystery (1902). The somewhat unfavourable view of John Knox presented in his book John Knox and the Reformation (1905) aroused considerable controversy. He gave new information about the continental career of the Young Pretender in Pickle the Spy (1897), an account of Alestair Ruadh MacDonnell, whom he identified with Pickle, a notorious Hanoverian spy. This was followed by The Companions of Pickle (1898) and a monograph on Prince Charles Edward (1900). In 1900 he began a History of Scotland from the Roman Occupation (1900). The Valet's Tragedy (1903), which takes its title from an essay on Dumas's Man in the Iron Mask, collects twelve papers on historical mysteries, and A Monk of Fife (1896) is a fictitious narrative purporting to be written by a young Scot in France in 1429–1431.[2]

Lang was active as a journalist in various ways, ranging from sparkling "leaders" for the Daily News to miscellaneous articles for the Morning Post, and for many years he was literary editor of Longman's Magazine; no critic was in more request, whether for occasional articles and introductions to new editions or as editor of dainty reprints.[2]

He edited The Poems and Songs of Robert Burns (1896), and was responsible for the Life and Letters (1897) of JG Lockhart, and The Life, Letters and Diaries (1890) of Sir Stafford Northcote, 1st Earl of Iddesleigh. Lang discussed literary subjects with the same humour and acidity that marked his criticism of fellow folklorists, in Books and Bookmen (1886), Letters to Dead Authors (1886), Letters on Literature (1889), etc.[2] 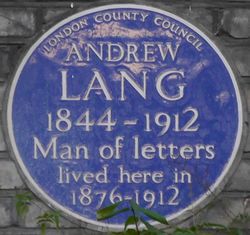 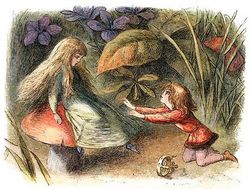 The prince thanking the Water Fairy, image from The Princess Nobody (1884), illustrated by Richard Doyle, engraved and coloured by Edmund Evans 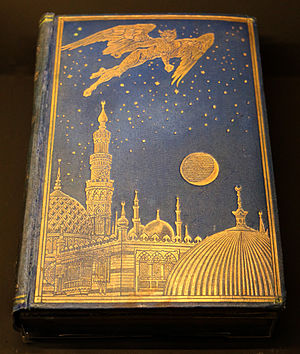