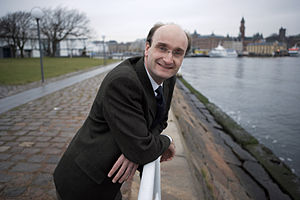 Andrew Manze (born 14 January 1965) is an English conductor and violinist.

In September 2014 he took up the position of Principal Conductor of the NDR Radio Philharmonic Orchestra in Hannover.[2] Between 2006 and 2014 he was Principal Conductor and Artistic Director of the Helsingborg Symphony Orchestra[3][4] in Sweden. He made a number of recordings with them including Beethoven’s Eroica (Harmonia Mundi) and Stenhammar Piano Concerti (Hyperion) and a cycle of the Brahms’ symphonies.[5] Manze was Associate Guest Conductor of the BBC Scottish Symphony Orchestra from September 2010 to August 2014.[6]

Manze is a fellow of the Royal Academy of Music and a Visiting Professor at the Oslo Academy and has contributed to new editions of sonatas and concertos by Mozart and Bach published by Bärenreiter and Breitkopf and Härtel. He also teaches, edits and writes about music, as well as broadcasting regularly on radio and television.