Andrew McAuley (born 7 August 1968; presumed dead 9–12 February 2007) was an Australian adventurer best known for mountaineering and sea kayaking in remote parts of the world. He is presumed to have died following his disappearance at sea while attempting to kayak 1600 km (994 mi) across the Tasman Sea in February 2007.

McAuley was born in Goulburn, New South Wales, on August 7, 1968. He attended Anglican Church Grammar School in East Brisbane (aka Churchie) and finished Year 12 in 1984. He was awarded Adventurer of the Year in 2005 by the Australian Geographic Society.[1]

In 2003, he made the first non-stop kayak crossing of the Bass Strait.[3] In 2004, he kayaked across the Gulf of Carpentaria. In 2006, he led an expedition in the Australian Antarctic Territory where they paddled over 800 km within the Antarctic Circle.[4]

In December 2006 McAuley's first attempt to cross the Tasman Sea in a standard one-man kayak was aborted after two days due to trouble keeping warm inside the cockpit.[5]

McAuley's second attempt began on 11 January 2007 and ended on 12 February when the search for his missing body was called off following the recovery of his partly flooded kayak on 10 February just 30 nautical miles (56 km) short of his destination Milford Sound.[6] 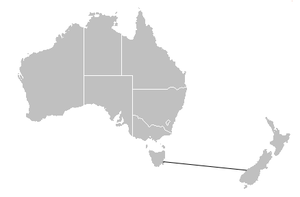 The sleeping arrangements at sea involved deploying a sea anchor,[7] squeezing his body down into the kayak and sealing the hatch with a bulbous fibreglass capsule (dubbed "Casper") fitted with an air-only ventilator[8] which, with its self-righting capabilities, made it possible to ride out the most severe storm conditions that are inevitable in that part of the ocean.

Unfortunately, when the capsule was pivoted to its stowing position behind the cockpit, it made it impossible to kayak roll due to being filled with water like a bucket. Therefore, whenever he capsized, he had to swim out of the kayak, push it upright and perform full self-rescue.[9]

When his kayak was recovered, only this capsule was missing.[10] It was presumed to have been torn off by a freak wave. One of its pivot arms had already been damaged.[11]

From the beginning, my biggest concern was the approach to New Zealand. And this part of New Zealand is notoriously dangerous. On a good day you can get rogue waves: a two or three metre set that can come out of nowhere. Not big, but powerful. That's very dangerous. I have no doubt that a wave got him.

The documentary of McAuley's journey, Solo: Lost At Sea, incorporated video footage recovered from one surviving memory stick in his camera, as well as interviews with people on his team during the expedition. It begins with the distress call he made on 9 February:[9]

McAuley's wife Vicki McAuley wrote a book, Solo, about him and his final voyage.[12]

In the same summer, a specially-constructed two-person kayak crossed the Tasman Sea at a more northerly route. The competitive spirit may have played a part in McAuley's determination to make the journey when he did.[9] A song has recently been written about his final journey by Australian composers Paul Jarman and Phil Voysey, entitled "Towards Infinity".