Wiles was born in 1953 in Cambridge, England, the son of Maurice Frank Wiles (1923–2005), the Regius Professor of Divinity at the University of Oxford,[1] and Patricia Wiles (née Mowll). His father worked as the Chaplain at Ridley Hall, Cambridge, for the years 1952–55. Wiles attended King's College School, Cambridge, and The Leys School, Cambridge.[citation needed]

Wiles states that he came across Fermat's Last Theorem on his way home from school when he was 10 years old. He stopped by his local library where he found a book about the theorem.[11] Fascinated by the existence of a theorem that was so easy to state that he, a ten-year-old, could understand it, but nobody had proven it, he decided to be the first person to prove it. However, he soon realised that his knowledge was too limited, so he abandoned his childhood dream, until it was brought back to his attention at the age of 33 by Ken Ribet's 1986 proof of the epsilon conjecture, which Gerhard Frey had previously linked to Fermat's famous equation.[citation needed]

Wiles earned his bachelor's degree in mathematics in 1974 at Merton College, Oxford, and a PhD in 1980 at Clare College, Cambridge. After a stay at the Institute for Advanced Study in New Jersey in 1981, Wiles became a professor at Princeton University. In 1985–86, Wiles was a Guggenheim Fellow at the Institut des Hautes Études Scientifiques near Paris and at the École Normale Supérieure. From 1988 to 1990, Wiles was a Royal Society Research Professor at the University of Oxford, and then he returned to Princeton. He rejoined Oxford in 2011 as Royal Society Research Professor.[citation needed]

Wiles's graduate research was guided by John Coates beginning in the summer of 1975. Together these colleagues worked on the arithmetic of elliptic curves with complex multiplication by the methods of Iwasawa theory. He further worked with Barry Mazur on the main conjecture of Iwasawa theory over the rational numbers, and soon afterward, he generalised this result to totally real fields.[citation needed]

The proof of Fermat's Last Theorem

Starting in the mid 1986, based on successive progress of the previous few years of Gerhard Frey, Jean-Pierre Serre and Ken Ribet, it became clear that Fermat's Last Theorem could be proven as a corollary of a limited form of the modularity theorem (unproven at the time and then known as the "Taniyama–Shimura-Weil conjecture"). The modularity theorem involved elliptic curves, which was also Wiles' own specialist area.

The conjecture was seen by contemporary mathematicians as important, but extraordinarily difficult or perhaps impossible to prove.[12]:203–205, 223, 226 For example, Wiles' ex-supervisor John Coates states that it seemed "impossible to actually prove",[12]:226 and Ken Ribet considered himself "one of the vast majority of people who believed [it] was completely inaccessible", adding that "Andrew Wiles was probably one of the few people on earth who had the audacity to dream that you can actually go and prove [it]."[12]:223

Despite this, Wiles, who had a childhood fascination with Fermat's Last Theorem, decided to undertake the challenge of proving the conjecture at least to the extent needed for Frey's curve.[12]:226 He dedicated all of his research time to this problem for over 6 years in near-total secrecy, covering up his efforts by releasing prior work in small segments as separate papers and confiding only in his wife.[12]:229–230 In 1993, he presented his proof to the public for the first time at a conference in Cambridge.[13] In August 1993 it was discovered that the proof contained a flaw in one area. Wiles tried and failed for over a year to repair his proof. According to Wiles, the crucial idea for circumventing, rather than closing this area, came to him on 19 September 1994 when he was on the verge of giving up. Together with his former student Richard Taylor, he published a second paper which circumvented the problem and thus completed the proof. Both papers were published in 1995 in a special volume of the Annals of Mathematics.[citation needed]

Recognition by the media 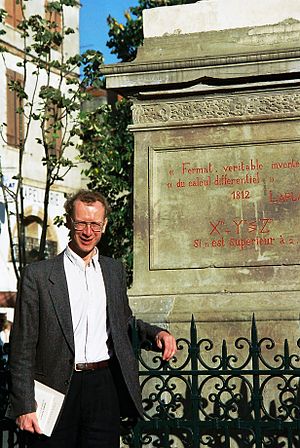 Wiles has been awarded a number of major prizes in mathematics and science:

Wiles nomination for election to the Royal Society reads:

Andrew Wiles is almost unique amongst number-theorists in his ability to bring to bear new tools and new ideas on some of the most intractable problems of number theory. His finest achievement to date has been his proof, in joint work with Mazur, of the "main conjecture" of Iwasawa theory for cyclotomic extensions of the rational field. This work settles many of the basic problems on cyclotomic fields which go back to Kummer, and is unquestionably one of the major advances in number theory in our times. Earlier he did deep work on the conjecture of Birch and Swinnerton-Dyer for elliptic curves with complex multiplication – one offshoot of this was his proof of an unexpected and beautiful generalisation of the classical explicit reciprocity laws of Artin-Hasse-Iwasawa. Most recently, he has made new progress on the construction of l-adic representations attached to Hilbert modular forms, and has applied these to prove the "main conjecture" for cyclotomic extensions of totally real fields – again a remarkable result since none of the classical tools of cyclotomic fields applied to these problems.[15]