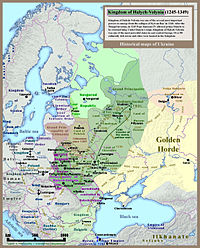 Andriy II Yuriyevych or Andrew of Galicia (Ukrainian: Андрій II Юрієвич) (unknown – 1323) was the last Rus' king of Galicia-Volhynia in 1308–1323 (according to other sources since 1315). He was the son of Yuriy I (1252–1308) whom he succeeded on the royal throne of Galicia. His mother was Euphemia of Kuyavia. After the death of his father, he ruled the kingdom together with his brother Lev II. Though the kingdom was one being managed together, there are sources informing that Andrew was seated in Volodymyr-Volynskyi and Lev II in Galicia.

It is known that in the second decade of 14th century, the Lithuanians strengthened its pressure upon Galicia-Volhynia taking Dorohychyn and Berestia lands away. The years of rule of brothers were in constant fight with Gediminas of Lithuania.

He had established firm relations with Polish king Władysław I the Elbow-high and Teutonic order and attempted to weaken dependence from the Golden Horde. For some time king Andrew had been fighting the Mongol-Tatars and Lithuania.

They were also in union with the allies of Władysław I the Elbow-high - Scandinavian and Pomeranian rulers against Margraves of Brandenburg (1315).

According to some historians he died together with his brother Lev II battling the Mongol-Tatars or Lithuanians while defending Berestia.

Both king Andrew and his brother Lev II were much respected on the west. In May 1323, the Polish king Władysław I the Elbow-high in his letter to the Pope wrote with regret: "The two last Ruthenian kings, that had been firm shields for Poland from the Tatars, left this world and after their death Poland is directly under Tatar threat."

After their death the line of direct descendants of Roman Mstyslavych broke and the Galician state remained without a dynasty. Galician boyars (nobility) attempted to rule the state themselves. That perhaps was the reason that that they sought the protection of the Tatars, which Władysław I the Elbow-high became afraid of. But soon more conservative elements took hold among the boyars and the Galician throne was given to the Mazovian duke Boleslaw Trojdenowicz (related to the deceased royal brothers through marriage to their sister Maria), who took the name Yuriy II and who ruled Galicia from 1323 until 1338. Boleslaw Treojdenowicz was married to Andrew's sister Maria who ruled along with the husband. Her niece, Eufemia, heiress of Volhynia ruled in Lutsk.