From Infogalactic: the planetary knowledge core
Jump to: navigation, search
For other uses, see Andria (disambiguation).

listen (help·info) is a city and comune in Apulia (southern Italy). It is an agricultural and service center, producing wine, olives and almonds. It is the fourth-largest municipality in the Apulia region (behind Bari, Taranto, and Foggia) and the largest municipality of the new Province of Barletta-Andria-Trani, effective as of June 2009.[2] 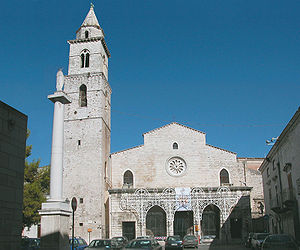 Different theories exist about the origins of Andria. In 915 it is mentioned as a "casale" ("hamlet") depending from Trani; it acquired the status of city around 1046, when the Norman count Peter enlarged and fortified the settlements in the area (including also Barletta, Corato and Bisceglie).

In the 14th century, under the Angevins, Andria became seat of a Duchy. In 1350 it was besieged by German and Lombard mercenaries of the Hungarian army, and in 1370 by the troops of Queen Joan I of Naples. In 1431 the ruler of Andria Francesco II Del Balzo found the mortal remains of Saint Richard of Andria, the current patron saint, and instituted the Fair of Andria (23–30 April). In 1487 the city was acquired by the Aragonese, the Duchy passing to the future King Frederick IV of Naples. Later (1552), it was sold by the Spanish to Fabrizio Carafa, for the sum of 100,000 ducats.

The Carafas ruled the city until 1799, when the French troops captured it after a long siege. After the Bourbon restoration, Andria was a protagonist of the Risorgimento and, after the unification of Italy, the brigandage era.

The city is located in the area of the Murgia and lies at a distance of 10 km (6.21 mi) from Barletta and the Adriatic coast. Its municipality, the 16th per area in Italy,[3] borders with Barletta, Canosa di Puglia, Corato (BA), Minervino Murge, Ruvo di Puglia (BA), Spinazzola and Trani. 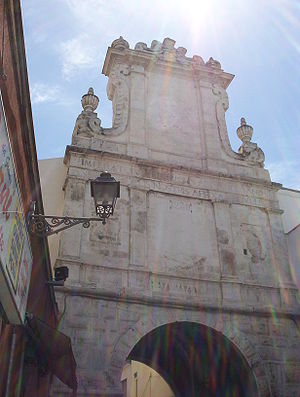 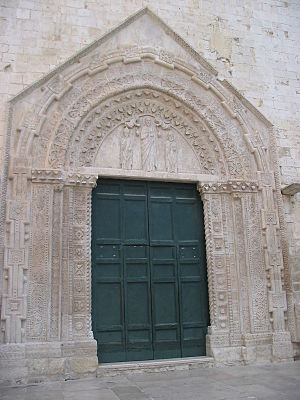 The 13th-century church of Sant'Agostino. 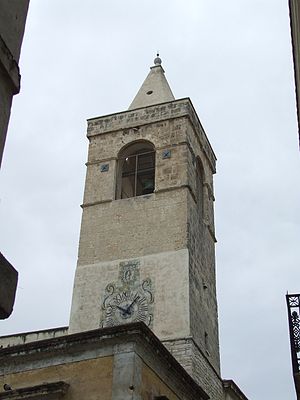 Andria was a favorite residence of Emperor Frederick II, who built nearby the imposing 13th century Castel del Monte, one of the most famous Italian castles that was named a World Heritage Site by UNESCO in 1996.

Andria is connected by the A14 National Motorway, and the SP 231 provincial road connecting it to Bari and Foggia.

Andria has a railway station in the Bari–Barletta railway, part of the Ferrovie del Nord Barese network managed by Ferrotramviaria. The nearest Trenitalia-FS (Italian national railroads) station is that of Barletta, 10 kilometres (6 miles) from Andria.

The nearest airport is that of Bari, 45 kilometres (28 miles) away.

The most popular sport in town is football and the main team is Fidelis Andria. Its home stadium is Stadio Degli Ulivi.

Andria is twinned with: