Andrew Clement "Andy" Serkis[1][2] (born 20 April 1964) is an English film actor, director and author. He is best known for his performance capture roles comprising motion capture acting, animation and voice work for such computer-generated characters as Gollum in The Lord of the Rings film trilogy (2001–2003) and The Hobbit: An Unexpected Journey (2012), the eponymous King Kong in the 2005 film, Caesar in Rise (2011) and Dawn of the Planet of the Apes (2014), Captain Haddock / Sir Francis Haddock in Steven Spielberg's The Adventures of Tintin (2011) and Supreme Leader Snoke in Star Wars: The Force Awakens (2015). Upcoming performance capture roles include Caesar in War for the Planet of the Apes (2017), Supreme Leader Snoke in Star Wars: Episode VIII (2017), and Baloo in Jungle Book (2018).

Serkis' film work in motion capture has been critically acclaimed, and he has been called the "godfather of motion capture".[3][4][5] Serkis has received an Empire Award, a National Board of Review Award, two Saturn Awards and a Screen Actors Guild Award for his motion-capture work. Serkis also earned a Golden Globe Award nomination for his portrayal of serial killer Ian Brady in the British television film Longford (2006) and was nominated for a BAFTA Award for his portrayal of new wave and punk rock musician Ian Dury in the biopic Sex & Drugs & Rock & Roll (2010). In 2015, he had a small role in Avengers: Age of Ultron. Serkis has his own motion capture workshop, The Imaginarium Studios in London, which he will use for his directorial debut, Jungle Book.

Serkis was born and brought up in Ruislip Manor in Middlesex. His mother, Lylie (born Weech), was English and taught disabled children. His father, Clement Serkis, was an Iraqi gynaecologist of Armenian ethnicity.[6][7] His ancestors' original surname was "Sarkisian".[8] His father often worked away in the Middle East, while Serkis and his siblings were raised in Britain, with regular holidays in the Middle East including to Tyre, Sidon, Damascus and Baghdad.[9]

Serkis was educated at St Benedict's School, Ealing, and then studied visual arts at Lancaster University. He chose theatre as a secondary subject so that he could design posters.[10] Serkis was a member of the County College and part of the student radio station Bailrigg FM. He joined the Nuffield Studio, getting involved in designing and producing plays.

Having agreed to act in a couple of productions, towards the end of his first year Serkis played the lead role in Barrie Keeffe's play Gotcha, as a rebellious teenager holding a teacher hostage. As a result, he changed his major subject to acting, constructing his Independent Studies Degree around acting and set design, studying Stanislavski and Brecht, and including minor modules in art and visual graphics.[11] In his final year at Lancaster he adapted Raymond Briggs's graphic novel The Tin-Pot Foreign General and the Old Iron Woman, a satire about the Falklands War, as a one-man show, which he performed to acclaim.

In his third year at college, Serkis joined the backstage team at the local Duke's Playhouse to earn his Equity card. On graduation, although advised to take a one-year post-graduate acting course, he joined Dukes as an actor and, under director Jonathan Petherbridge who used workshops based upon the methods of Augusto Boal, spent 18 months acting in a broad range of productions from Brecht through Shakespeare to modern British playwrights.[12]

After 16 months, and having gained his Equity card, Serkis joined a series of touring companies, including productions of: Bouncers opposite Hull Truck; Florizel in The Winter's Tale; and the fool in King Lear with director Max Stafford-Clark.[12] In the early 1990s he settled in London, and took roles in Dogboy, the Royal Court Theatre's production of Mojo, Bill Sikes in a television film of Oliver Twist (1999) and Wilson Milam's production of Hurlyburly (1997) at the Queen's Theatre, Shaftesbury Avenue, with Rupert Graves and David Tennant.[13]

Like many British actors, Serkis made the move to television by appearing in small roles, such as Greville in an episode of The Darling Buds of May (1992). However, one of his first major starring roles was in the joint BBC/HBO production of Einstein and Eddington (2008). Serkis played Albert Einstein, following the development of his theory of relativity, while David Tennant played British scientist Sir Arthur Eddington. Serkis joined director Mike Leigh's ensemble for two film productions, and appeared in the romantic comedy Loop (1997) alongside Susannah York. 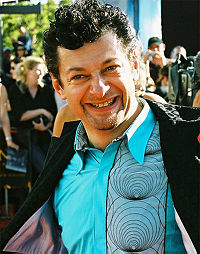 Serkis at the world premiere of The Lord of the Rings: The Return of the King in Wellington, New Zealand on 1 December 2003

His work on The Lord of the Rings started a debate on the legitimacy of CGI-assisted acting. Some critics[16] felt Serkis should have been nominated for the Academy Award for Best Supporting Actor, since his voice, body language, and facial expressions were used. There is the argument that his CGI actions were partially, or in some cases fully, animated without his movements, but the same is true for actors in a traditional film with CGI. Serkis does appear briefly as Sméagol before he transforms into Gollum, and the CGI Gollum's facial characteristics are fundamentally based on Serkis' own.

Serkis worked with game developers Ninja Theory on the 2007 release Heavenly Sword, providing the motion capture and voice for King Bohan (the game's main villain), as well as acting as Dramatic Director for the game. He has played 30 roles in film and television productions. He appeared alongside Sacha Baron Cohen in The Jolly Boys' Last Stand.

Serkis was cast as serial killer Ian Brady in the BAFTA-nominated Longford, co-starring Samantha Morton as Myra Hindley and Jim Broadbent as Lord Longford. The film was attacked by relatives of Brady's and Hindley's victims.[17] Winnie Johnson, the mother of Keith Bennett whose body has never been found, publicly criticised Serkis for requesting a meeting with Brady in preparation for the role. Serkis portrayed Brady in three scenes in the film, two of which depict prison visits by Longford, with Brady urging him not to support Hindley as she is a manipulative woman who will "destroy" him.

In 2006, Serkis appeared in the role of Mr. Grin in the film rendition of Anthony Horowitz's Alex Rider novel Stormbreaker. In 2006, he was in the film The Prestige as Mr. Alley, assistant to Nikola Tesla, and as the voice of Spike, one of the henchrats in the Aardman Animations film Flushed Away. In 2006 Serkis appeared in Jim Threapleton's improvised feature film Extraordinary Rendition, which premiered in 2007.

Serkis appeared in Sugarhouse, a low-budget independently made film, playing local crime lord Hoodwink, who terrorises an east London housing estate. For the role, Serkis shaved his head and had sessions lasting 20 hours each to have temporary tattoos stencilled onto his body. The film premiered at the 2007 Edinburgh Festival and released in the UK on 24 August 2007. 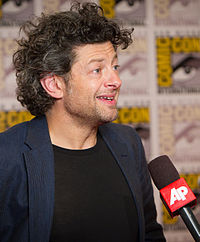 In 2007, Serkis provided the voice over for Monkey Life, Five broadcast for three weeks from 13–31 August 2007. This series is about Monkey World, the popular ape and monkey sanctuary and zoo near Wool, Dorset. Serkis reunited with Peter Jackson, as a cast member in Jackson's and Steven Spielberg's Tintin trilogy, based on The Adventures of Tintin. Serkis supplied the voice and motion capture performance of Captain Haddock (adopting a Scottish accent) as well as his ancestor, Sir Francis Haddock. Filming began in January 2009 and the film was released in 2011.[18] Filming was due to begin in September 2008 but was delayed due to Universal pulling out of backing the project.[19] In 2008, Serkis appeared as Rigaud in the BBC Television adaptation of Charles Dickens' Little Dorrit and as Capricorn in Inkheart.

In 2009, Serkis voiced the role of the demon Screwtape in Focus on the Family's Radio Theatre audio adaptation of C. S. Lewis's The Screwtape Letters.[20] In 2010, Serkis was cast as William Hare, with Simon Pegg as Burke, in the John Landis black comedy film Burke and Hare based on the Burke and Hare murders in Scotland in 1828.[21]

In 2010, Serkis features in the TV series The Accused, in "Liam's Story", written by Danny Brocklehurst and Jimmy McGovern. He played Caesar in the 20th Century Fox science-fiction film Rise of the Planet of the Apes.[22] Serkis was acclaimed for his performance as Caesar, and in a high-profile campaign by 20th Century Fox for him to be honoured with a Best Supporting Actor Oscar nomination, his co-star James Franco stated: "Andy Serkis is the undisputed master of the newest kind of acting called “performance capture,” and it is time that Serkis gets credit for the innovative artist that he is."[14] In 2010, Serkis played Monkey, the lead character along with Lindsay Shaw in the videogame Enslaved: Odyssey to the West. 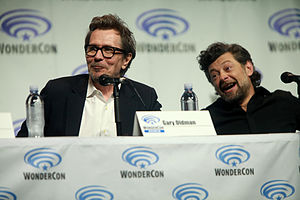 In January 2011, it was confirmed that Serkis would reprise the role of Gollum in the three-part The Hobbit films which were released in 2012, 2013 and 2014.[23] He was also the film's second unit director, which included directing aerial shots and battle scenes.[9] He was invited to join the Academy of Motion Picture Arts and Sciences in June 2012 along with 175 other individuals.[24] In 2014, Serkis reprised his role as Caesar in Dawn of the Planet of the Apes.[15]

In Gareth Edwards' 2014 science-fiction monster film Godzilla, Serkis was the consultant on the film's motion capture sequences in order to "control the souls" of the creatures.[25][26] Serkis played Ulysses Klaue in Marvel Studios' Avengers: Age of Ultron (2015), and was also a motion capture consultant on the film.[27] Serkis played Supreme Leader Snoke in the 2015 Star Wars: The Force Awakens.[28] The character served as the film's secondary antagonist, after Kylo Ren.

In late 2015, it was announced that Serkis was working on a modern film adaptation of Rumpelstiltskin, titled Steelskin.[29] In addition to starring in the film, Serkis will serve as producer and director.[29]

In 2011, Serkis founded The Imaginarium Studios with film producer Jonathan Cavendish. The Imaginarium is a creative digital studio based in Ealing, London and is dedicated to invention of believable, emotionally engaging digital characters using Performance Capture technology, in which Serkis specialises.[30] On 20 October 2012 the studio acquired rights to The Bone Season by Samantha Shannon and a new motion capture adaptation of Animal Farm, which Serkis will direct.[31]

Serkis has served as the second unit director for The Hobbit films and will make his directorial debut for Jungle Book.[32]

Serkis published a memoir about his experiences playing Gollum in the The Lord of the Rings film trilogy, Gollum: How We Made Movie Magic, published in late 2004. He also made an appearance in the music video for Neneh Cherry's "Woman", portraying the singer's abusive boyfriend. 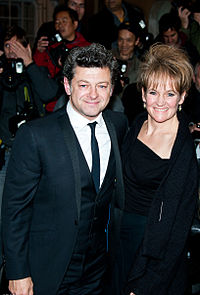 Serkis and his wife Lorraine Ashbourne in 2013

Serkis was born to Catholic parents,[33] and though he has been an atheist since his teenage years,[34] he is drawn to the karmic possibilities of energy transference, specifically "the idea that your energy lives on after you".[34]