Angela of Foligno, T.O.S.F., (1248 – 4 January 1309) was an Italian Franciscan tertiary who became known as a mystic from her extensive writings about her mystical revelations. Due to the respect they engendered in the Catholic Church, she is known as "Mistress of Theologians".

Angela was noted not only for her spiritual writings, but also for founding a religious community which refused to accept becoming an enclosed religious order that it might continue her vision of caring for those in need. It is still active.

The Catholic Church declared Angela to be a saint in 2013. 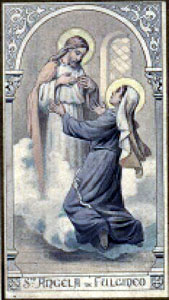 Angela's birth date, which is not known with certainty, is often listed as 1248. She was born into a wealthy family at Foligno, in Umbria. Married, perhaps at an early age, she had several children. Angela reports that she loved the world and its pleasures.[1] Around the age of 40, she reportedly had a vision of St. Francis and recognized the emptiness of her life.[2] From that time, she began to lead a life devoted to higher perfection.

Three years later, Angela's mother died, followed, a few months later, by her husband and children.[2] With one serving woman, Masazuola, as her companion, she began to divest herself of her possessions and to live as a penitent.[3] Angela joined the Third Order of St. Francis, probably in 1291.[1] She placed herself under the direction of a Franciscan friar named Arnoldo, who would serve as her confessor.

Considered a "great medieval mystic," Angela is said to have received mystical revelations, which she dictated to a scribe in the late 13th century. These accounts are contained in a compilation of two works, usually published under the title Il Libro della Beata Angela da Foligno.[4]

Angela recorded the history of her conversion in her Book of Visions and Instructions. She dictated, in her Umbrian dialect, an account of her spiritual progress, known as the Memoriale, which was transcribed in Latin by a man known as "Brother A." This work was probably begun in 1292.[5] 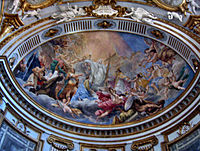 Brother A. remained with her until 1296 while she completed the higher and more difficult final ten stages, but since it proved impossible for him to understand these fully, he condensed them into seven ‘supplementary stages’ whose description takes up the larger portion of the Memorial. The text was finished by 1298, and submitted to Cardinal James of Colonna and eight Friars Minor, who gave it their approval. It seems that Brother A. revised it shortly after, in 1299-1300.[3]

Between around 1296 and her death in early 1309, the fame of Angela's sanctity gathered around her a number of other tertiaries, both men and women, who strove under her direction to advance in holiness. Later she established at Foligno a community of other women tertiaries, who added to the Rule of the Third Order a commitment to a common life without, however, binding themselves to enclosure, so that they might devote their lives to works of charity.

"And pray in this fashion: always reading the Book of Life, that is, the life of the God-man, Jesus Christ, whose life consisted of poverty, pain, contempt and true obedience." (( from Voices of the Saints, Bert Ghezzi ))

At Christmas 1308, Angela told her companions she would die shortly. A few days later, she had a vision of Christ appearing to her and promising to come personally to take her to heaven. She died in her sleep on January 3, 1309.

Angela died surrounded by her community of disciples. Her remains repose in the Church of St. Francis at Foligno. Many people attributed miracles to her, which were accomplished at her tomb.[1]

Angela's authority as a spiritual teacher may be gathered from the fact that Bollandus, among other testimonials, quotes Maximilian van der Sandt, of the Society of Jesus, as calling her the "'Mistress of Theologians', whose whole doctrine has been drawn out of the Book of Life, Jesus Christ, Our Lord".[1]

Pope Clement XI approved the veneration paid to her over the centuries in his beatification of her on 11 July 1701 and Pope Francis extended the veneration to all the Church on 9 October 2013, declaring her a saint by the procedure of equivocal canonization, recognizing the validity of the long-held veneration of her.

Angela's feast day is celebrated by the Third Order of Saint Francis, both Secular and Regular, on 4 January (7 January in the United States). Although the community she founded was never recognized as a religious institute until the 20th-century, she is honored as a religious.