Angelica archangelica, commonly known as garden angelica, Holy Ghost, wild celery, and Norwegian angelica, is a biennial plant from the Apiaceae family, a subspecies of which is cultivated for its sweetly scented edible stems and roots. Like several other species in Apiaceae, its appearance is similar to several poisonous species (Conium, Heracleum, and others), and should not be consumed unless it has been identified with absolute certainty. Synonyms include Archangelica officinalis Hoffm., and Archangelica officinalis var. himalaica C.B.Clarke.[citation needed]

During its first year it grows only leaves, but, during its second year, its fluted stem can reach a height of two meters (or six feet). Its leaves comprise numerous small leaflets divided into three principal groups, each of which is again subdivided into three lesser groups. The edges of the leaflets are finely toothed or serrated. The flowers, which blossom in July, are small and numerous, yellowish or greenish, are grouped into large, globular umbels which bear pale yellow, oblong fruits. Angelica grows only in damp soil, preferably near rivers or deposits of water.

Angelica archangelica grows wild in Russia, Finland, Sweden, Norway, Denmark, Greenland, the Faroe Islands, and Iceland, mostly in the northern parts of the countries. It is cultivated in France, mainly in the Marais Poitevin, a marsh region close to Niort in the department Deux-Sèvres. It also grows in certain regions in Germany like the Harz mountains, in certain regions of Romania, like the Rodna Mountains, in hilly and coastal regions of Poland and some South East Asian countries like Thailand. 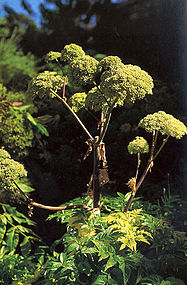 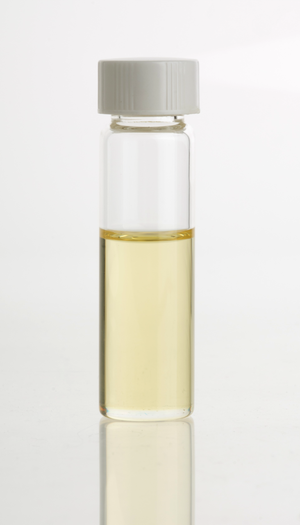 From the 10th century on, angelica was cultivated as a vegetable and medicinal plant,[2] and achieved popularity in Scandinavia in the 12th century and is still used today, especially in Sami culture. A flute-like instrument with a clarinet-like sound can be made of its hollow stem. Linnaeus reported that Sami peoples used it in reindeer milk,[citation needed] as it is often used as a flavoring agent.

In 1602, angelica was introduced in Niort, which had just been ravaged by the plague.[dubious – discuss] It is used to flavor liqueurs or aquavits, (e.g., Chartreuse, Bénédictine, Vermouth, and Dubonnet), omelettes and trout, and as jam. The long bright-green stems are also candied and used as decoration.

Angelica is unique amongst the Umbelliferae for its pervading aromatic odor, a pleasant perfume entirely different from fennel, parsley, anise, caraway, or chervil. It has been compared to musk and to juniper. Even the roots are fragrant, and form one of the principal aromatics of European growth - the other parts of the plant have the same flavor, but their active principles are considered more perishable.

The fruits are tiny mericarps and are used in the production of absinthe and other alcoholic drinks.[3] Seeds of a Persian spice plant known as Golpar (Heracleum persicum) are often labeled as "angelica seeds".

Angelica archangelica roots have been used in the traditional Austrian medicine internally as tea or tincture for treatment of disorders of the gastrointestinal tract, respiratory tract, nervous system, and also against fever, infections, and flu.[4]

John Gerard's Herball praises the plant and states that "it cureth the bitings of mad dogs and all other venomous beasts."[5]

A. archangelica contains a variety of chemicals.

Archangelica comes from the Greek word "arkhangelos" (=arch-angel), due to the myth that it was the archangel Michael who told of its use as medicine.