From Infogalactic: the planetary knowledge core
Jump to: navigation, search
For the container ship, see MV Angeln. For the steamship, see SS Angeln. 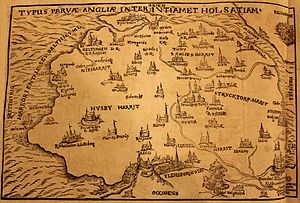 Map of Angeln of the 16th century 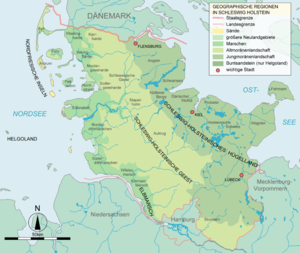 The geographical regions and geology of Bundesland Schleswig-Holstein, Germany 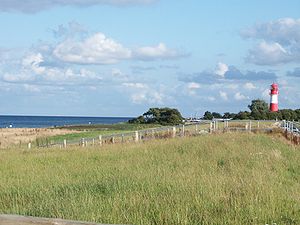 Angeln, also known as Anglia (German: Angeln, Danish: Angel, Latin: Anglia), is a small peninsula (within the larger Jutland peninsula) in Southern Schleswig in the northern Schleswig-Holstein, Germany, protruding into the Bay of Kiel. It is separated from the neighbouring peninsula of Schwansen (Danish: Svans or Svansø) by the Schlei inlet, and from the Danish island of Als by the Flensburger Förde ("Firth of Flensburg"). Whether ancient Angeln conformed to these borders, however, is uncertain. It may have been somewhat larger; however, the ancient sources mainly concur that it included the territory of modern Angeln.

Angeln has a significance far beyond its current small area and country terrain, in that it is believed to have been the original home of the Angles, Germanic immigrants to central and Northern England and East Anglia. This migration led to their new homeland being named after them, from which the name "England" derives. Both England and the English language, thus, ultimately derive at least their names from the Angles and Angeln.

The name of the Angles is thought to derive from the name of the area they inhabited, Angeln. The latter has been hypothesised to originate from the Germanic root for "narrow" (compare German eng = "narrow"), meaning "the Narrow [Water]", i.e. the Schlei estuary; the root would be angh, "tight". Another theory is that the name meant "hook", as in angling for fish; Julius Pokorny, a major Indo-European linguist, derives it from *ang-, "bend" (see ankle).

Angeln is situated on the large bight linking the Baltic coast to Jutland, which is mainly the Bay of Kiel (Kieler Bucht), but might be seen as Holsteiner Bucht.

The Angles were part of the grouping of the Ingvaeones, claiming descent from the legendary ancestor and fertility god Yngvi. Pokorny points out the possible use of this etymological root in other ancient names, such as Hardanger and Angrivarii.

The region was home to the Germanic people, the Angles, who, together with Saxons and Jutes, left their home to migrate to Britain in the 5th and 6th centuries. For the years 449-455, the Anglo-Saxon Chronicle, written around 890, describes how King Vortigern (a British tribal king) invited the Angles to come and receive land in return for helping him defend against marauding Picts. Those successful Angles sent word back that good land was available and that the British were 'worthless'. (In fact, the racial contempt of the Angles towards the Britons was an invention[citation needed] of the monk Gildas, who is part founder of this origin myth.[citation needed] His object was to vilify the decadence of the British leadership).[citation needed] A wholesale emigration of Angles and kindred German peoples followed.

The Chronicle, commissioned by King Alfred the Great, drew on earlier oral traditions and on the few written fragments available. The best of these, written around 730, was by the monk Bede whose history of English Christianity had the following brief account of the origin and distribution of the Angles:

from the Angles, that is, the country which is called Anglia, and which is said, from that time, to remain desert to this day, between the provinces of the Jutes and the Saxons, are descended the East Angles, the Midland Angles, Mercians, all the race of the Northumbrians, that is, of those nations that dwell on the north side of the River Humber, and the other nations of the English.

The phrase "north of the Humber" refers to the northern kingdom of Northumbria, which includes what is now north and north-eastern England and part of southern Scotland. Mercia was located in central England and broadly corresponds to what is now known as the English Midlands.

This account can be related to the evidence of archaeology, notably the distribution of types of fibulae, or brooches, worn by the women. In essence, there are two kinds at issue, the saucer brooch and the cruciform brooch. East coastal and northern Britain were settled by women wearing cruciform brooches, which were in use in coastal Scandinavia, all of Denmark, and Schleswig-Holstein all the way south to the lower Elbe and all the way east to the Oder, as well as a pocket in coastal Friesland.

Southern England, excepting Kent was settled by women wearing the saucer brooch, which came from Lower Saxony, the south side of the lower Elbe, and pockets in the lands of the Franks up the Rhine and along the coast to the mouth of the Seine. These are the areas of England that are labelled explicitly as Saxon: Sussex, Wessex, Middlesex and Essex. The settlement of Kent is attributed to Jutes, who originated in the land to the north of Angeln. 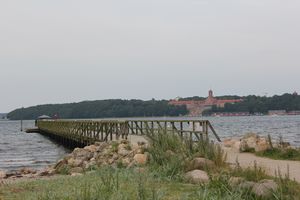 The Flensburg Firth with the Red Castle of Mürwik

After the Angles departed from Anglia, by the 8th century the region was occupied by Danes. This is reflected in the large number of place names ending in -by (meaning -village) in the region today. In the 10th century, the chronicler Æthelweard reports that the most important town in Angeln was Hedeby.

Later Angeln's history is subsumed in that of the larger surrounding region, which came to be known as Southern Jutland or Schleswig (Danish: Slesvig). Until the 19th century, the area belonged primarily to Denmark. But, in terms of ethnic and linguistic heritage, a mixed German/Danish population evolved. Denmark lost Schleswig to Austria and Prussia in 1864 as a result of the second war of Schleswig. In 1920, following Germany's defeat in the First World War, a plebiscite was held to determine which areas should return to Danish control. As a result of the plebiscite, much of Schleswig returned to Denmark, but Angeln remained in Germany. See Schleswig-Holstein Question for a detailed history.