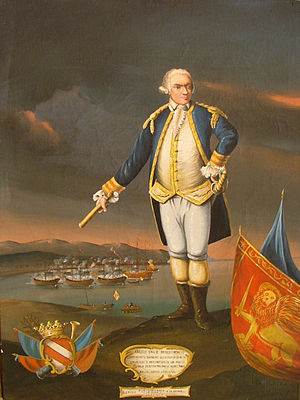 Angelo Emo (3 January 1731 – 3 March 1792) was the last Grand Admiral of the Republic of Venice. He attempted to introduce reforms based on the practices of the British Royal Navy, and led raids on Moorish targets along the Barbary Coast in retaliation for corsair attacks on Venetian-flagged shipping.

Emo, who was born in Venice, was assigned to hunt down the Barbary pirates in the Mediterranean sea. In 1784 he sailed on board the ship Fama in command of twenty-four vessels. The siege of Tunis happened in 1785, and although Emo did not succeed in capturing Tunis, he reduced the Bey to terms and received thanks from Louis XVI of France.[1]