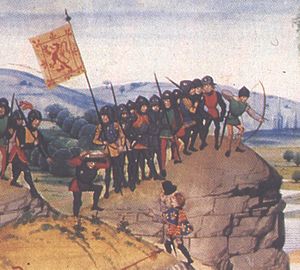 The Anglo-Scottish Wars were a series of wars fought between the Kingdom of England and the Kingdom of Scotland following the Wars of Scottish Independence in the 14th century, and ended by the Union of the Crowns in 1603, wherein England and Scotland entered a personal union.

After the Wars of Scottish Independence, England and Scotland fought several times during the 14th, 15th and 16th centuries. In most cases, one country attempted to take advantage of weakness or instability in the other. For example, James II of Scotland attempted to regain Berwick during the Wars of the Roses in England.

During the mid-15th century there were many conflicts on the border of England and Scotland, most notably the Battle of Sark.

England under Henry VIII declared war on France in 1512 (as part of the larger conflict known as the War of the League of Cambrai). James IV of Scotland invaded England in fulfilment of his alliance with France (even though married to Henry's sister Margaret).

In 1513, after preliminary raids by borderers came to grief, James's main army invaded England. His artillery quickly subdued English castles such as Norham and Wark. However, James's overdeveloped sense of chivalry prompted him to issue a formal challenge to the English army under the Earl of Surrey and await him in position. Surrey's army manoeuvred around the Scottish army and attacked from the rear. In the resulting disastrous Battle of Flodden, James IV was killed, along with many of his nobles and gentry, the "Flowers of the Forest".

James V of Scotland was an infant barely a year old at his father's death. Various factions among the Scottish nobles contended for power, and custody of the young king. While Henry VIII secretly encouraged some of them, English armies and some families of English and nominally Scottish Border Reivers repeatedly forayed and looted in southwest Scotland, to maintain pressure on the Scottish authorities.

Eventually, after the faction of the Earl of Angus gained control, peaceful relations were restored between England and Scotland. (Part of the reason for Henry's mellowing was that the disorders he had provoked in Scotland threatened to spill south of the border.)

When James V came of age and assumed control, he overthrew the Angus faction, and renewed Scotland's Auld Alliance with France. He married first a daughter of Francis I of France, and when she died a few months later of tuberculosis, he married Mary of Guise. Tension between England and Scotland increased once again; not least because Henry had already broken with the Roman Catholic Church and embarked upon the Dissolution of the Monasteries, whereas James held to Rome and gave authority to powerful prelates such as Cardinal David Beaton.

War broke out in 1541. Once again there were preliminary border skirmishes, but when James sent a large army into England, its leadership was weak and divided and it suffered a humbling defeat at the Battle of Solway Moss.

The disaster caused James's health to fail[citation needed] and he died shortly afterwards. Once again, Scotland's monarch was an infant, this time Mary, Queen of Scots. Henry tried to pressure a divided Scotland into an alliance, and secure the marriage of Mary to his son Edward (the "Rough Wooing"). When Cardinal Beaton gained control of the government of Scotland and renewed the alliance with France, Henry reacted in 1544 by sending an army under the Earl of Hertford, Edward's uncle, to systematically devastate and slaughter throughout southern Scotland, as a means of inducing a change of heart.[citation needed] Campaigning continued the next year, but some Scottish factions reconciled and won a victory at the Battle of Ancrum Moor, which temporarily halted English attacks.

Henry died in 1547. Hertford, now Protector and Duke of Somerset, renewed the attempt to enforce an alliance, and also to impose an Anglican Reformation on Scotland. He won a great victory at the Battle of Pinkie Cleugh, but Mary was smuggled to France to be betrothed to the Dauphin Francis. Fighting continued for some more years, but French troops assisted the Scots. Without lasting peace, Somerset's regime could not stand the expense of the war. He was overthrown and eventually executed.

Pinkie Cleugh was the last pitched battle between England and Scotland prior to the Union of the Crowns in 1603. Beaton was murdered in 1546, and within a few years, Scotland underwent a major religious reformation which was, unlike most European countries, remarkably peaceful and was never seriously threatened by counter-reformation, though neighbouring England was to undergo a counter-reformation under Queen Mary I. For a while, both countries were distracted by internal troubles. Eventually, Queen Elizabeth I came to rule England and restore stability.

Scotland remained divided. The Catholic faction under the queen mother, Mary of Guise, held Leith and Edinburgh. Elizabeth was able to ensure victory for the Protestant faction by using her fleet to blockade the Catholics and prevent French aid reaching them.

For the later part of the 16th century, peace was ensured by the probability that James VI of Scotland, who was raised as a Protestant and was the son of Mary, Queen of Scots, would become King of England on the death of Elizabeth. There was perennial trouble from Border Reivers, but Elizabeth was inclined to forgive even their depredations rather than pick a quarrel with her Protestant neighbour.