Anglosphere refers to a set of English-speaking nations with a similar cultural heritage, based upon populations originating from the nations of the British Isles (England, Wales, Scotland and Ireland), and which today maintain close political and military cooperation. While the nations included in different sources vary, the term anglosphere usually does not include all countries where English is an official language, although the nations that are commonly included were all once part of the British Empire. In its most restricted sense, the term covers the United Kingdom, Ireland, the United States, Canada, Australia and New Zealand, which post-British Empire maintain a close affinity of cultural, familial and political links with one another. Additionally, all these countries (except Ireland) are militarily aligned under the following programs: UKUSA Agreement (signals intelligence), Five Eyes (intelligence), Combined Communications Electronics Board (communications electronics), The Technical Cooperation Program (technology and science), Air and Space Interoperability Council (air forces), AUSCANNZUKUS (navies), and ABCA Armies.

Below is a table comparing the countries of the Anglosphere (data updated in 2014).[1] 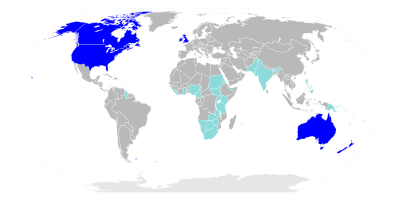 Definitions of the Anglosphere vary: countries in which English is the first language of the majority of the population are shown in blue     ; other countries where English has status as an official language are shown in light blue     .

'The Anglosphere' was first coined, but not explicitly defined, by the science fiction writer Neal Stephenson in his book The Diamond Age, published in 1995.[3] John Lloyd adopted the term in 2000 and defined it as including the United States and the United Kingdom along with English-speaking Canada, Australia, New Zealand, Ireland, South Africa and the British West Indies.[4] The Merriam-Webster dictionary defines the Anglosphere as "the countries of the world in which the English language and cultural values predominate".[5] The Shorter Oxford English Dictionary uses the definition "the group of countries where English is the main native language".[6]

The American businessman James C. Bennett, a proponent of the idea that there is something special about the cultural and legal traditions of English-speaking nations, writes in his 2004 book The Anglosphere Challenge: 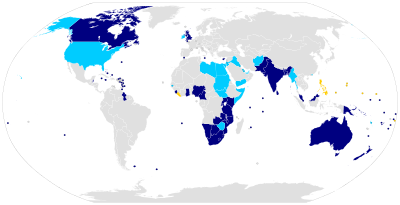 Bennett argues that there are two challenges confronting his concept of the Anglosphere. The first is finding ways to cope with rapid technological advancement and the second is the geopolitical challenges created by what he assumes will be an increasing gap between anglophone prosperity and economic struggles elsewhere.[8]

British historian Andrew Roberts claims that the Anglosphere has been central in the First World War, Second World War and Cold War. He goes on to contend that anglophone unity is necessary for the defeat of Islamism.[9]

According to a 2003 profile in The Guardian, historian Robert Conquest favoured a British withdrawal from the European Union in favour of creating "a much looser association of English-speaking nations, known as the 'Anglosphere'".[10]

New Zealand historian James Belich connected patterns of growth in the industrialisation of the United States and the United Kingdom with former Dominions of the British Empire New Zealand, Australia, Canada and South Africa, and more loosely to growth in former UK constituent country Ireland, as well as British-allied Argentina, during the 19th and early to mid-20th century, in his book Replenishing the Earth. He used the term "Anglo-World" to refer to the US, UK and former Dominions, arguing that the experience and present reality of former British colonies like India, Kenya and Jamaica differ in substantial and important ways from this core group of countries.

Michael Ignatieff wrote in an exchange with Robert Conquest, published by the New York Review of Books, that the term neglects the evolution of fundamental legal and cultural differences between the US and the UK, and the ways in which UK and European norms have been drawn closer together during Britain's membership in the EU through regulatory harmonisation. Of Conquest's view of the Anglosphere, Ignatieff writes: "He seems to believe that Britain should either withdraw from Europe [Brexit] or refuse all further measures of cooperation, which would jeopardize Europe's real achievements. He wants Britain to throw in its lot with a union of English-speaking peoples, and I believe this to be a romantic illusion".[11]