From Infogalactic: the planetary knowledge core
Jump to: navigation, search
This article is about the council area in Scotland. For other uses, see Angus (disambiguation).
"Forfarshire" redirects here. For the ship, see Forfarshire (ship).

Angus (Scottish Gaelic: Aonghas) is one of the 32 local government council areas of Scotland, a registration county and a lieutenancy area. The council area borders Aberdeenshire, Dundee City and Perth and Kinross. Main industries include agriculture and fishing. Global pharmaceuticals company GSK has a significant presence in Montrose in the north of the county.

Angus was historically a county, known officially as Forfarshire from the 18th century until 1928. It remains a registration county and a lieutenancy area. In 1975 its administrative functions were transferred to the council district of the Tayside Region, and in 1995 further reform resulted in the establishment of the unitary Angus Council.

The area that now comprises Angus has been occupied since at least the Neolithic period. Material taken from postholes from an enclosure at Douglasmuir, near Friockheim, about five miles north of Arbroath have been radiocarbon dated to around 3500 BC The function of the enclosure is unknown, but may have been for agriculture or for ceremonial purposes.[1]

Bronze age archaeology is to be found in abundance in the area. Examples include the short-cist burials found near West Newbigging, about a mile to the North of the town. These burials included pottery urns, a pair of silver discs and a gold armlet.[2] Iron Age archaeology is also well represented, for example in the souterrain nearby Warddykes cemetery[3] and at West Grange of Conan,[4] as well as the better-known examples at Carlungie and Ardestie.

The county is traditionally associated with the Pictish kingdom of Circinn, which is thought to have encompassed Angus and the Mearns. Bordering it were the kingdoms of Ce (Mar and Buchan) to the North, Fotla (Atholl) to the West, and Fib (Fife) to the South.

The most visible remnants of the Pictish age are the numerous sculptured stones that can be found throughout Angus. Of particular note are the collections found at Aberlemno, St Vigeans, Kirriemuir and Monifieth.

Angus is marketed as the birthplace of Scotland. The signing of the Declaration of Arbroath at Arbroath Abbey in 1320 marked Scotland's establishment as an independent nation. It is an area of rich history from Pictish times onwards. Notable historic sites in addition to Arbroath Abbey include Glamis Castle, Arbroath Signal Tower museum and the Bell Rock Light House.

Main industries include agriculture and fishing. Global pharmaceuticals company GSK has a significant presence in Montrose in the north of the county.

The most recent available census results (2001) show that Gaelic is spoken by 0.45% of the Angus population. This, similar to other lowland areas, is lower than the national average of 1.16%.[5] These figures are self-reported and are not broken down into levels of fluency.

Historically, the dominant language in Angus was Pictish until the sixth to seventh centuries AD when the area became progressively gaelicised, with Pictish extinct by the mid-ninth century.[6] Gaelic/Middle Irish began to retreat from lowland areas in the late-eleventh century and was absent from the Eastern lowlands by the fourteenth century. It was replaced there by Middle Scots, the contemporary local South Northern dialect of Modern Scots, while Gaelic persisted as a majority language in the highland Glens until the 19th century.[7] Scottish English is now increasingly replacing Scots.

Angus Council are planning to raise the status of Gaelic in the county by adopting a series of measures, including bilingual road signage, communications, vehicle livery and staffing.[8]

The boundaries of the present council area are the same as those of the county minus the City of Dundee.

Areas similar to that of the council area are covered by the Angus Westminster constituency for the UK Parliament, and the area is represented at the Scottish Parliament by the Angus and North Tayside Holyrood constituencies.

Angus can be split into three geographic areas. To the north and west, the topography is mountainous. This is the area of the five Angus Glens, which is sparsely populated and where the main industry is hill-farming. To the south and east the topography consists of rolling hills bordering the sea. This area is well populated, with the larger towns. In between lies Strathmore (the Great Valley), which is a fertile agricultural area noted for the growing of potatoes, soft fruit and the raising of Angus cattle. Montrose in the north east of the county is notable for its tidal basin. 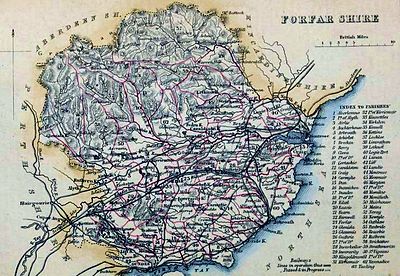 Most common surnames in Angus (Forfarshire) at the time of the United Kingdom Census of 1881:[13]