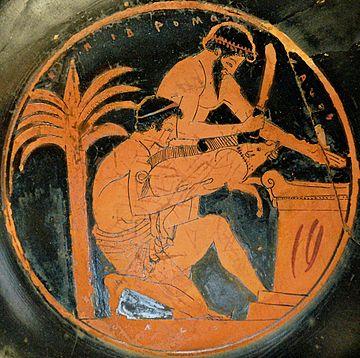 Sacrifice of a young boar in ancient Greece (tondo from an Attic red-figure cup, 510–500 BC, by the Epidromos Painter, collections of the Louvre)

Animal sacrifice is the ritual killing and offering of an animal to appease or maintain favour with a deity. Such forms of sacrifice are practised within many religions around the world. All or only part of a sacrificial animal may be offered, especially in the context of ritual slaughter. 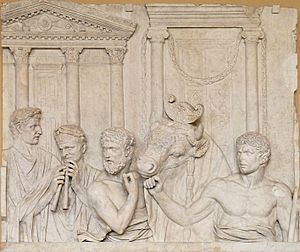 Preparation of an animal sacrifice; marble, fragment of an architectural relief, first quarter of the 2nd century AD; from Rome, Italy

Animal sacrifices were common throughout Europe and the Ancient Near East until Late Antiquity.

The Minoan settlement of Phaistos in ancient Crete reveals basins for animal sacrifice dating to the period 2000 to 1700 BC.[1]

Many Jewish sources discuss the deeper meaning behind korbanot. For example, Sefer Hachinuch explains that an individual bringing an animal sacrifice for a sin understands that he personally should have been sacrificed as punishment for the rebellion against God inherent in his sin, but God mercifully accepts the sacrifice in his or her place. Furthermore, it is considered fitting that an animal is used as a sacrifice because at the moment of sin, the individual in question disregarded his elevated human soul, effectively acting as an animal.

In Kapparot, a rooster is sacrificed on the afternoon before Yom Kippur. The purpose of the sacrifice being the expiation of the sins of the man as the chicken symbolically receives the man's sins, which is based on the reconciliation of Isaiah 1:18 in the Hebrew Bible.

The Samaritans,[2] a group historically related to the Jews, practice animal sacrifice in accordance with the Law of Moses. 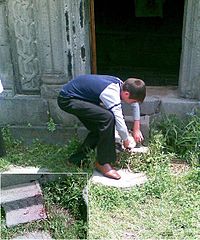 Matagh of a rooster at the entrance of a monastery church (Alaverdi, Armenia, 2009), with inset of bloody steps.
Further information: Lamb of God

References to animal sacrifice appear in the New Testament, such as the parents of Jesus sacrificing two doves (Luke 2:24) and the Apostle Paul performing a Nazirite vow even after the death of Christ (Acts 21:23-26).

Christ is referred to by his apostles as "the Lamb of God", the one to whom all sacrifices pointed (Hebrews 10).[3] According to the penal substitution theory of atonement, Christ's crucifixion is comparable to animal sacrifice on a large scale as his death serves as a substitutionary punishment for all of humanity's sins.

Some villages in Greece also sacrifice animals to Orthodox saints in a practice known as kourbània. Sacrifice of a lamb, or less commonly a rooster, is a common practice in Armenian Church and Tewahedo Church. This tradition, called matagh, is believed to stem from pre-Christian pagan rituals. Additionally, some Mayans following a form of Folk Catholicism in Mexico today still sacrifice animals in conjunction with church practices, a ritual practiced in past religions before the arrival of the Spaniards.[4]

Muslims engaged in the Hajj (pilgrimage) are obligated to sacrifice a lamb or a goat or join others in sacrificing a cow or a camel during the celebration of the Eid al-Adha.[5][6] Other Muslims not on the Hajj to Mecca are also encouraged to participate in this sacrifice to share in the sanctity of the occasion. It is understood as a symbolic re-enactment of Abraham's sacrifice of a ram in place of his son, a narrative present throughout Abrahamism. Meat from this occasion is divided into three parts:

Other occasions where the lamb is sacrificed include the celebration of the birth of a child, reaching the final stages of building a house, the acquisition of a valuable commodity, and even the visit of a dear or honourable guest. For Muslims, the sacrifice of lamb was and is associated with celebrations, feasts, generosity, and the seeking of blessings. Most schools of fiqh hold the animal must be killed according to the prohibitions of halal sacrifice.

Given the prohibition on sacrifices for sin contained in III Nephi 9:19-20 (Book of Mormon), Strang did not require sin offerings. Rather, he focused on sacrifice as an element of religious celebrations,[7] especially the commemoration of his own coronation as king over his church, which occurred on July 8, 1850.[8] The head of every house, from the king to his lowest subject, was to offer "a heifer, or a lamb, or a dove. Every man a clean beast, or a clean fowl, according to his household."[9]

While the killing of sacrifices was a prerogative of Strangite priests,[10] female priests were specifically barred from participating in this aspect of the priestly office.[11] "Firstfruits" offerings were also demanded of all Strangite agricultural harvests.[12] Animal sacrifices are no longer practiced by the Strangite organization, though belief in their correctness is still required.

Neither The Church of Jesus Christ of Latter-day Saints nor the Community of Christ, the two largest Latter Day Saint factions, ever accepted Strang's teachings on this (or any other) subject.

Practices of Hindu animal sacrifice are mostly associated with Shaktism, and in currents of folk Hinduism strongly rooted in local tribal traditions. Animal sacrifices were carried out in ancient times in India. Hindu scriptures, including the Gita, and the Puranas forbid animal sacrifice[13][14][15][16] and any meat processing, based on the doctrine of ahimsa.[15] 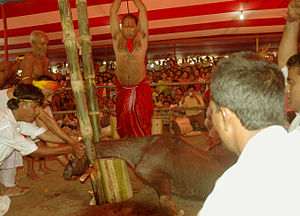 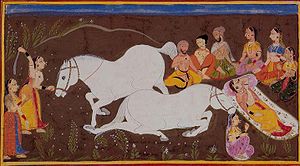 1652 illustration of the Ashvamedha of Kaushalya in the Ramayana epic

There are Hindu temples in Assam and West Bengal India and Nepal where goats, chickens and sometimes Water buffalos are sacrificed. These sacrifices are performed mainly at temples following the Shakti school of Hinduism where the female nature of Brahman is worshipped in the form of Kali and Durga. There are many village temples in Tamil Nadu where this kind of sacrifice takes place.[30]

In some Sacred groves of India, particularly in Western Maharashtra, animal sacrifice is practiced to pacify female deities that are supposed to rule the Groves.[31]

Animal sacrifice en masse occurs during the three-day-long Gadhimai festival in Nepal. In 2009 it was speculated that more than 250,000 animals were killed[32] while 5 million devotees attended the festival.[33]

In India, ritual of animal sacrifice is practised in many villages before local deities or certain powerful and terrifying forms of the Devi. In this form of worship, animals, usually goats, are decapitated and the blood is offered to deity often by smearing some of it on a post outside the temple.[34] or instance, Kandhen Budhi is the reigning deity of Kantamal in Boudh district of Orissa, India. Every year, animals like goat and fowl are sacrificed before the deity on the occasion of her annual Yatra/Jatra (festival) held in the month of Aswina (September–October). The main attraction of Kandhen Budhi Yatra is Ghusuri Puja. Ghusuri means a child pig, which is sacrificed to the goddess every three years. Kandhen Budhi is also worshipped at Lather village under Mohangiri GP in Kalahandi district of Orissa, India.[35](Pasayat, 2009:20-24).[full citation needed]

Bali Jatra of Sonepur in Orissa, India is also an annual festival celebrated in the month of Aswina (September–October) when animal sacrifice is an integral part of the ritual worship of deities namely Samaleswari, Sureswari and Khambeswari. Bali refers to animal sacrifice and hence this annual festival is called Bali Jatra (Barik, 2009:160-162).[full citation needed]

The religious belief of Tabuh Rah, a form of animal sacrifice of Balinese Hinduism includes a religious cockfight where a rooster is used in religious custom by allowing him to fight against another rooster in a religious and spiritual cockfight, a spiritual appeasement exercise of Tabuh Rah.[36] The spilling of blood is necessary as purification to appease the evil spirits, and ritual fights follow an ancient and complex ritual as set out in the sacred lontar manuscripts.[37]

Buddhism and Taoism generally prohibit killing of animals;[38][39][40] some animal offerings, such as fowl, pigs, goats, fish, or other livestock, are accepted in some Taoism sects and beliefs in Chinese folk religion.[41][42][43]

In Kaohsiung, animal sacrifices are banned in Taoist temples.[44]

The landmark decision by the Supreme Court of the United States in the case of the Church of Lukumi Babalu Aye v. City of Hialeah in 1993 upheld the right of Santería adherents to practice ritual animal sacrifice in the United States of America. Likewise in Texas in 2009, legal and religious issues that related to animal sacrifice, animal rights and freedom of religion were taken to the 5th U.S. Circuit Court of Appeals in the case of Jose Merced, President Templo Yoruba Omo Orisha Texas, Inc., v. City of Euless. The court ruling that the Merced case of the freedom of exercise of religion was meritorious and prevailing and that Merced was entitled under the Texas Religious Freedom and Restoration Act (TRFRA) to an injunction preventing the city of Euless, Texas from enforcing its ordinances that burdened his religious practices relating to the use of animals,[47] (see Tex. Civ. Prac. & Rem. Code § 110.005(a)(2)).