listen)] (Polish: Nakło nad Pianą), formerly known as Tanglim and Wendenburg,[2] is a town in the Western Pomerania region of Mecklenburg-Vorpommern, Germany. It is situated on the banks of the Peene river, just 8 km from its mouth in the Kleines Haff, the western part of the Stettin Lagoon. Anklam has a population of 14,603 (2005) and was the capital of the former Ostvorpommern district. Since September 2011, it is part of the district Vorpommern-Greifswald. 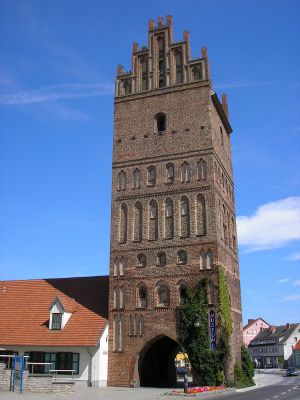 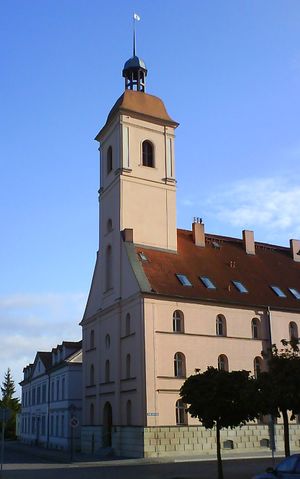 Garrison church of Anklam, evidence of Prussian tradition of the town

In the early Middle Ages, there was an important Scandinavian and Wendish settlement in the area near the present town now known as Altes Lager Menzlin. Anklam proper began as an associated Wendish fortress.[3]

During the German expansion eastwards, the abandoned fortress was developed into a settlement named Tanglim[2] after its new founder. The site possesses importance as the head of navigation on the Peene.[2] It was elevated to town status in 1244 and became a member of the Hanseatic League the same year[3] or in 1483.[citation needed] The town remained small and non-influential, but achieved a measure of wealth and prosperity with its membership.

As a town of considerable military importance, it suffered greatly during the Thirty Years' War[2] when Swedish and Imperial troops battled over it across a twenty-year span. Amid this and subsequent wars, it also endured repeated outbreaks of fire and plague.[2] It was occupied by imperial forces from 1627 to 1630,[4] and thereafter by Swedish forces.[5] After the war, Anklam became part of Swedish Pomerania in 1648. In 1676, it was captured by Frederick William of Brandenburg.[3]

In 1713, Anklam was looted by soldiers of the Russian Empire.[3] That it was not burned to the ground, as ordered by Peter the Great, was in large part due to the resistance of Christian Thomesen Carl ("Carlson"), after whom a street is named in remembrance. The southern parts of the town were ceded to Prussia by the 1720 Treaty of Stockholm,[3] while a smaller section north of the Peene remained Swedish. It was damaged again during the Seven Years' War in the 1750s and '60s, with its fortifications being effectively dismantled in 1762.[2] Sweden yielded its remaining part of the town in 1815, when all of Western Pomerania became part of the Prussian province of Pomerania.

In the 19th century, Anklam was connected with Berlin and Stettin by rail and developed its manufacture of linen and woolen goods, leather, beer, and soap.[2] Its 1871 population was 10,739,[2] which had risen to 14,602 by the turn of the century.[3] By the time of the First World War, it possessed a military school and developed iron foundries and sugar factories.[3] In 1939 the Wehrmacht took over the military school and constructed a military prison on the grounds.

Anklam was nearly completely destroyed by several bombing raids of the U.S. Air Force in 1943 and 1944 and in the last days of World War II, when the advancing Soviets burned and leveled most of the town. After Prussia and its Pomeranian province were dissolved and most of Pomerania was allocated to Poland under the terms of the Potsdam Conference, Anklam became part of the East German state of Mecklenburg-Vorpommern. That was soon to be dissolved, too, and Anklam was within the district of Neubrandenburg. The town was rebuilt in the rather uniform socialist style.

After the 1990 reunification of Germany, Anklam became part of the state of Mecklenburg-Vorpommern, re-created at that time. 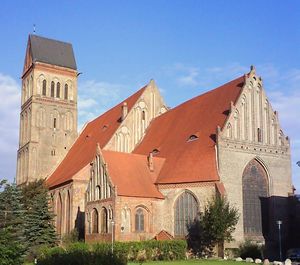 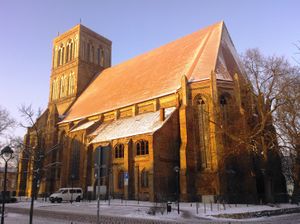 Anklam was a prosperous medieval city but suffered severely during the Thirty Years' War, the Seven Years' War, and the Second World War, as well as from periodic fires. Nonetheless, Anklam has some significant buildings remaining. The 12th-century church of St Mary was rebuilt in the 15th century,[6] had a modern spire added in the 19th,[3] and was repaired in 1947.[6] 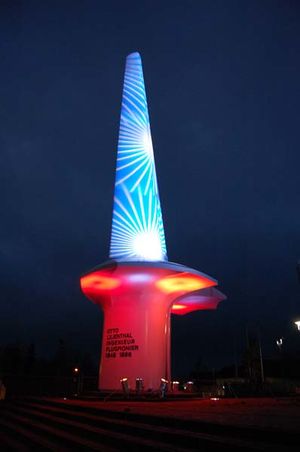 Memorial in front of the Otto-Lilienthal-Museum

Anklam is connected with the Autobahn 20 coastal highway.

Anklam is twinned with: