Hall was born in Dublin on 6 January 1800. She lived with her mother, a widow named Sarah Elizabeth Fielding, and stepfather, George Carr of Graigie, Wexford, until 1815. The daughter came to England with her mother in 1815, and on 20 September 1824, married Samuel Carter Hall. Her mother lived with her in London until she died.[2]

Mrs. Hall's first recorded contribution to literature is an Irish sketch called 'Master Ben,' which appeared in The Spirit and Manners of the Age, January 1829, pp. 35–41 et seq. Other tales followed. Eventually they were collected into a volume entitled Sketches of Irish Character, 1829, and henceforth she became 'an author by profession.' Next year she issued a little volume for children, Chronicles of a School-Room, consisting of a series of simple tales.

In 1831, she published a second series of 'Sketches of Irish Character' fully equal to the first, which was well received. The first of her nine novels, The Buccaneer, 1832, is a story of the time of the protectorate, and Cromwell is among the characters. To the New Monthly Magazine, which her husband was editing, she contributed Lights and Shadows of Irish Life, articles which were republished in three volumes in 1838. The principal tale in this collection, 'The Groves of Blarney,' was dramatised with considerable success by the author with the object of supplying a character for Tyrone Power, and ran for a whole season at the Adelphi in 1838. Mrs. Hall also wrote 'The French Refugee,' produced at the St. James's Theatre in 1836, where it ran ninety nights, and for the same theatre Mabel's Curse, in which John Pritt Harley sustained the leading part.[2]

Another of her dramas, of which she had neglected to keep a copy, was Who's Who? which was in the possession of Tyrone Power (1795–1841) when he was lost in the President in April 1841. In 1840, she issued what has been called the best of her novels, Marian, or a Young Maid's Fortunes, in which her knowledge of Irish character is again displayed in a style equal to anything written by Maria Edgeworth. Her next work was a series of 'Stories of the Irish Peasantry,' contributed to Chambers's Edinburgh Journal, and afterwards published in a collected form. In 1840 she aided her husband in a book chiefly composed by him, 'Ireland, its Scenery, Characters, &c.' She edited the 'St. James's Magazine,' 1862–3.[2]

In the Art Journal, edited by her husband, she brought out Pilgrimages to English Shrines in 1849, and here the most beautiful of all her books, Midsummer Eve, a Fairy Tale of Love, first appeared. One of her last works, Boons and Blessings, 1875, dedicated to the Earl of Shaftesbury, is a collection of temperance tales, illustrated by the best artists.[2]

Mrs. Hall's sketches of her native land bear a closer resemblance to the tales of Miss Mitford than to the Irish stories of Banim or Griffin. They contain fine rural descriptions, and are animated by a healthy tone of moral feeling and a vein of delicate humour. Her books were never popular in Ireland, as she saw in each party much to praise and much to blame, so that she failed to please either the Orangemen or the Roman Catholics.[2]

On 10 December 1868, she was granted a civil list pension of £100 a year. She was instrumental in founding the Hospital for Consumption at Brompton, the Governesses' Institute, the Home for Decayed Gentlewomen, and the Nightingale Fund. Her benevolence was of the most practical nature; she worked for the temperance cause, for women's rights, and for the friendless and fallen. She was a friend to street musicians, and a thorough believer in spiritualism; but this belief did not prevent her from remaining, as she ever was, a devout Christian. She kept the fiftieth anniversary of her wedding day on 20 September 1874. She died at Devon Lodge, East Moulsey, 30 January 1881, and was buried in Addlestone churchyard, 5 February.[2] 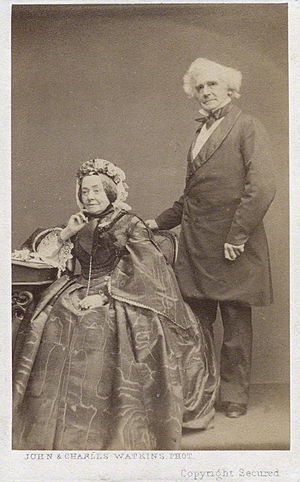 Other works were The Buccaneer, Can Wrong Be Right?[3] and many sketches in the Art Journal, of which her husband Samuel Carter Hall was editor, and Sharpe's London Magazine. With her husband she also collaborated on a work entitled Ireland: Its Scenery, Character, etc. (1841–43).[4]