From Infogalactic: the planetary knowledge core
Jump to: navigation, search
Not to be confused with Maria Anna Mozart. 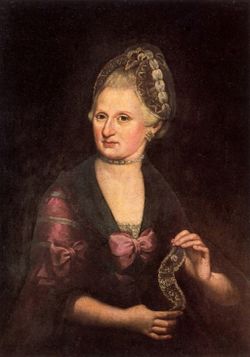 Anna Maria Mozart; portrait in oils by Rosa Hagenauer-Barducci from about 1775. The portrait now resides in the Mozart birth home museum in Salzburg.

She was born in St. Gilgen, Archbishopric of Salzburg, to Eva Rosina (1681–1755) and Wolfgang Nicolaus Pertl (1667–1724), deputy prefect of Hildenstein. Nicolaus had a university degree in jurisprudence from the Benedictine University in Salzburg, and held a number of positions of responsibility, including district superintendent in St. Andrae. He was apparently a skilled musician. He suffered a severe illness in 1714 and had to change positions to one with a fairly low salary (250 florins per year) as deputy superintendent of Hüttenstein. During the last portion of his life he fell deeply into debt, and he died 7 March 1724.[1]

Nicolaus's possessions were liquidated to help pay the debt, and his remaining family (Anna Maria's mother and her older sister Maria Rosina, born 24 August 1719) lapsed into poverty. They moved to Salzburg, not far away, and lived on a charity pension of just eight (later nine) florins per month, perhaps supplemented by low-level employment. Anna Maria's older sister died in 1728, aged nine. Anna Maria herself was not well when she was young: legal documents from the time describe her as "constantly ill" (1733) and "the constantly ill bedridden daughter" (1739).[1]

Wolfgang Amadeus Mozart as a child (1763), said to be by Pietro Antonio Lorenzoni

She married Leopold Mozart in Salzburg in 1747; Abert writes, "the two were regarded at the time as a handsomest couple in Salzburg."[2] The couple moved (perhaps with the mother) into an apartment on the third floor of Getreidegasse 9. Their landlord was Lorenz Hagenauer, who was a close friend of Leopold's and a frequent correspondent on the family's later travels.[1]

The Mozarts had seven children, of whom only two survived infancy:[3]

Anna Maria nearly died giving birth to Wolfgang: her womb retained the placenta, and forced removal of it which at the time posed extreme risk of fatal infection.[10]

The two surviving children achieved fame. The daughter Maria Anna was called "Nannerl" as a child. She was a talented musician who performed with her brother on tour, but whose later life was very limited in its experiences and possibilities. The son, Wolfgang Amadeus, born 27 January 1756, achieved distinction first as a child prodigy, later as one of the most celebrated of all composers.

Assessing the evidence of the surviving letters, Abert writes of her role as spouse: "she understood her husband's phlegmatic and painfully conscientious nature and did all she could to spare him the numerous troubles and worries that stemmed from it, a task that cannot have been easy, given his perpetual mistrust, and there is no doubt that she will have drawn a veil over many an unpleasant incident not merely out of prudence, but also from fear. Yet she was utterly devoted to him and willingly submitted to the strict regime to which he inevitably and unquestioningly subjected her." Concerning Anna Maria as a mother, he says, "It was a pure and healthy spirit that reigned in the Mozart household... and Anna Maria must take much of the credit for this. Above all, she was a true mother to her children, who invariably sought refuge with her when their father's strict hand weighed unduly heavily upon them. Wolfgang loved and admired her to distraction."[11] The letters record that Anna Maria participated with zest in the family's tendency toward scatological humor, a tendency seen more strongly in Wolfgang; see Mozart and scatology.

File:ParisMaisonMozart.jpg
"W.A. Mozart and his mother lived in this house in 1778 – she died here on July 3" – 8 rue du Sentier in Paris

Anna Maria went on the series of tours (1762–1768) through Europe, during which the two children were exhibited as prodigies.[12] She unwillingly remained in Salzburg with Nannerl during the tours of Italy that Wolfgang and Leopold took during 1769–1773. In 1777, she accompanied the now-adult Wolfgang (again unwillingly)[13] on a job-hunting tour that took him to Augsburg, Mannheim, and Paris.

File:Mèremozart.JPG
Plaque in the Saint-Eustache church in Paris

While in Paris she suddenly took ill and died on 3 July 1778 of an undiagnosed illness. She was buried in the cemetery of Saint-Eustache.[14]