Anna Moffo (June 27, 1932 – March 9, 2006) was an American opera singer, television personality, and award-winning dramatic actress. One of the leading lyric-coloratura sopranos of her generation, she possessed a warm and radiant voice of considerable range and agility. Because of her physical appearance she was nicknamed "La Bellissima".[1] Winning a Fulbright Scholarship to study in Italy, she became very popular there after performing leading operatic roles on three RAI television productions in 1956. Moffo returned to America for her debut at the Lyric Opera of Chicago on October 16, 1957. In New York, her Metropolitan Opera debut took place on November 14, 1959. She performed at the Met for over seventeen seasons. Although Anna Moffo's original recordings were made for EMI Records, she later signed an exclusive contract with RCA Victor. In the early 1960s, she hosted her own show on Italian television, was acclaimed for her beauty, appeared in several operatic films, and other dramatic non-singing roles. In the early 1970s she extended her international popularity to Germany through operatic performances, TV appearances, and several films...all while continuing her American operatic performances. Due to an extremely heavy workload, Moffo suffered a serious vocal-breakdown in 1974, from which she never fully recovered. In later years, she gave several master classes through the Met. Her death at age 73 was preceded by a decade-long battle with cancer.

Anna Moffo was born in Wayne, Pennsylvania, USA[2] to Italian parents, Nicola Moffo (a shoemaker) and his wife Regina Cinti. After graduating from Radnor High School, she turned down an offer to go to Hollywood and went instead to the Curtis Institute of Music in Philadelphia where she studied with Eufemia Giannini-Gregory, sister of soprano Dusolina Giannini. In 1954, on a Fulbright Program scholarship, she left for Italy to complete her studies at the Accademia Nazionale di Santa Cecilia in Rome where she was a pupil of Mercedes Llopart and Luigi Ricci. She later studied voice privately in New York City with Beverley Peck Johnson.[3] 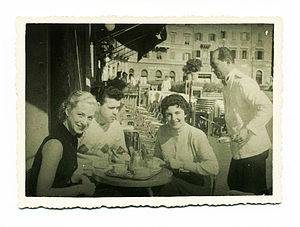 Anna Moffo (right) with Janet Cox-Rearick Waldman (left) at a cafe in Rome in 1954, when both were Fulbright Fellows in Italy

Moffo made her official operatic debut in 1955 in Spoleto as Norina in Don Pasquale. Shortly after, still virtually unknown and little experienced, she was offered the challenging role of Cio-Cio San in an Italian television (RAI) production of Madama Butterfly. The telecast aired on January 24, 1956, and made Moffo an overnight sensation throughout Italy. Offers quickly followed and she appeared in two other television productions that same year, as Nannetta in Falstaff and as Amina in La sonnambula. She appeared as Zerlina in Don Giovanni, at the Aix-en-Provence Festival and made her recording debut for EMI as Nannetta (Falstaff) under Herbert von Karajan, and as Musetta in La bohème with Maria Callas, Giuseppe Di Stefano and Rolando Panerai. The following year (1957) saw her debut at the Vienna State Opera, the Salzburg Festival, at La Scala in Milan and the Teatro San Carlo in Naples.

Moffo returned to America for her debut there, as Mimì in La bohème next to Jussi Björling's Rodolfo, at the Lyric Opera of Chicago on October 16, 1957. Moffo had three other roles at the Lyric that season: Mignon, Le nozze di Figaro (with Gobbi, Simionato and Steber) and Lucia di Lammermoor. On at least one occasion her performance of Lucia's Mad Scene earned Moffo a 10-minute standing ovation.

Her Metropolitan Opera debut took place on November 14, 1959, as Violetta in La traviata, a part that would quickly become her signature role. She performed at The Metropolitan Opera for seventeen seasons in roles such as Lucia, Gilda, Adina, Mimì, Liù, Nedda, Pamina, Marguerite, Juliette, Manon, Mélisande, Périchole, the four heroines of Les contes d'Hoffmann, etc. Alfred Lunt's production of La Traviata as part of the opening of the new Metropolitan Opera House in the Lincoln Center in 1966 was mounted specially for her.

In the late 1950s, she recorded Susanna in Le nozze di Figaro, opposite Elisabeth Schwarzkopf and Giuseppe Taddei, conducted by Carlo Maria Giulini; and recitals of Mozart arias with EMI. She then became an exclusive RCA Victor artist, with whom she recorded most of her best operatic roles.

Moffo was also invited to sing at the San Francisco Opera where she made her debut as Amina on October 1, 1960. During that period she also made several appearances on American television, while enjoying a successful international career singing at most major opera houses around the world (Stockholm, Berlin, Monte Carlo, Mexico City, Buenos Aires, etc.). At the Metropolitan Opera in March 1961 with Birgit Nilsson and Franco Corelli she performed in Turandot as Liù, conducted by Leopold Stokowski.[4] She made her debut at the Royal Opera House in London, as Gilda, in a Franco Zeffirelli production of Rigoletto. Shortly after the Italian tenor Sergio Franchi joined RCA Victor, they recorded a popular album of operetta duets, The Dream Duet, which peaked at number ninety seven on the Billboard 200 in 1963.[5] Later that year Franchi and Moffo collaborated in recording The Great Moments From Die Fledermaus with The Vienna State Orchestra and Chorus, Oskar Dannon conducting. In 1999 this album was re-mastered and re-issued in High Performance Stereo.[6] 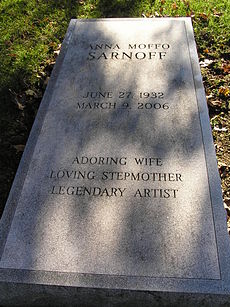 Moffo remained particularly popular in Italy and performed there regularly. She hosted a program on Italian television "The Anna Moffo Show" (two series: the first in 1964; the second in 1967) and was voted one of the ten most beautiful women in Italy. She appeared in film versions of La traviata (1968) and Lucia di Lammermoor (1971), both produced (with the Italian TV director Sandro Bolchi) and directed by her first husband Mario Lanfranchi, as well as a few non-operatic films. In the early 1970s, she began appearing on German television and in operetta films such as Die Csárdásfürstin and Die schöne Galathée. She also recorded with Eurodisc the title roles in Carmen and Iphigenie in Aulis, as well as the role of Hänsel in Hänsel und Gretel.

Such a heavy workload, however, led to physical exhaustion and a serious vocal-breakdown in 1968, from which she never fully recovered. Although she continued to sing in staged opera through 1980, she appeared only sporadically. Her last appearance at the Met was during the 1983 Centennial celebrations, where she sang the Sigmund Romberg duet "Will You Remember?" with Robert Merrill. After retiring from singing Moffo remained active in the opera community as a Board Member of the Metropolitan Opera Guild and by hosting several tributes and giving occasional masterclasses.

Moffo was married twice, first to stage and film director Mario Lanfranchi, on December 8, 1957. The couple divorced in 1972. Her second marriage was to Robert Sarnoff, Chairman of the RCA Corporation, on November 14, 1974. Sarnoff died on February 22, 1997.

Anna Moffo spent the last years of her life in New York City, where she died of a stroke at age 73, following a decade-long battle with breast cancer.[citation needed] She is interred with Sarnoff at Kensico Cemetery, Valhalla, New York. 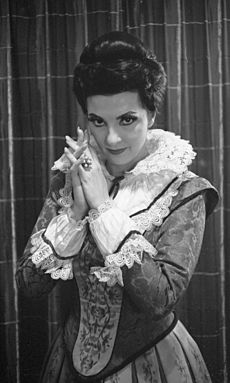