Anna Seghers (19 November 1900 – 1 June 1983) was a German writer famous for depicting the moral experience of the Second World War. The pseudonym Anna Seghers was apparently based on the surname of the Dutch painter and printmaker Hercules Pieterszoon Seghers or Segers (c. 1589 – c. 1638).

Born Anna (Netty) Reiling in Mainz in 1900 into a Jewish family, her father was an dealer in antiques and cultural artefacts.[1] She married Laszlo Radvanyi, also known as Johann Lorenz Schmidt, a Hungarian Communist in 1925, thereby acquiring Hungarian citizenship.[1]

In Cologne and Heidelberg she studied history, the history of art and Chinese. She joined the Communist Party of Germany in 1928, at the height of its struggle against the burgeoning National Socialist German Workers Party. Her 1932 novel, Die Gefährten was a prophetic warning of the dangers of Fascism, which led to her being arrested by the Gestapo. In 1932, she also formally left the Jewish community.[2] 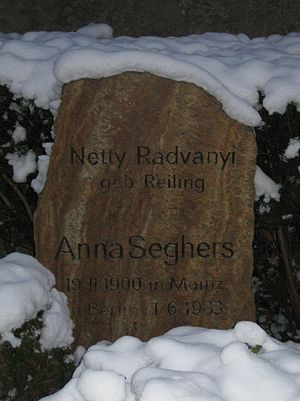 Tombstone of Anna Seghers in Berlin

By 1934 she had emigrated, via Zurich, to Paris.[1] After German troops invaded the French Third Republic in 1940, she fled to Marseilles and one year later to Mexico, where she founded the anti-fascist 'Heinrich-Heine-Klub', named after the German Jewish poet Heinrich Heine, and founded Freies Deutschland (Free Germany), an academic journal. Still in Paris, in 1939, she had written The Seventh Cross, for which she received the Büchner-Prize in 1947. The novel is set in 1936 and describes the escape of seven prisoners from a concentration camp. It was published in the United States in 1942 and produced as a movie in 1944 by MGM starring Spencer Tracy. The Seventh Cross was one of the very few depictions of Nazi concentration camps, in either literature or the cinema, during World War II.

Seghers best-known story The Outing of the Dead Girls (1946), written in Mexico, was an autobiographical reminiscence of a pre- World War I class excursion on the Rhine river in which the actions of the protagonist's classmates are seen in light of their decisions and ultimate fates during both world wars. In describing them, the German countryside, and her soon-to-be destroyed hometown Mainz, Seghers gives the reader a strong sense of lost innocence and the senseless injustices of war, from which there proves to be no escape, whether or not you sympathized with the Nazi party. Other notable Seghers stories include Sagen von Artemis (1938) and The Ship of the Argonauts (1953), both based on myths.

In 1947, Anna Seghers returned to Germany, moved to West Berlin, and became a member of the SED in the zone occupied by the Soviets and received Georg Büchner Prize in the same year. In 1950, she moved to East Berlin and became a co-founder of the freedom movement of the GDR[citation needed][clarification needed] and became a member of World Peace Council. In 1951, she received the first Nationalpreis der DDR, the Stalin Peace Prize also in 1951, and an honorary doctorate by the University of Jena in 1959. In 1981, she became honorary citizen of her native town Mainz.[3][4] She died in Berlin on 1 June 1983.

Anna Seghers gets a "cameo" mention in the ostalgie film, Good Bye Lenin!.