From Infogalactic: the planetary knowledge core
Jump to: navigation, search
For the mother of the Virgin Mary, see Saint Anne. For the Old Testament person, see Hannah (biblical figure). 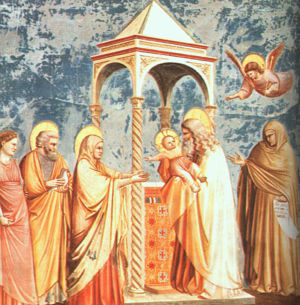 Anna at the presentation of Jesus (right), from Giotto, Chapel of Scrovegni.

Anna (Hebrew: חַנָּה‎, Ancient Greek: Ἄννα) or Anna the Prophetess is a woman mentioned in the Gospel of Luke. According to that Gospel, she was an elderly Jewish woman who prophesied about Jesus at the Temple of Jerusalem. She appears in Luke 2:36–38 during the presentation of Jesus at the Temple.

The passage mentioning Anna is as follows:

Luke 2:36–38 There was also a prophet, Anna, the daughter of Phanuel, of the tribe of Asher. She was very old; she had lived with her husband seven years after her marriage, and then was a widow until she was eighty-four.[*] She never left the temple but worshiped night and day, fasting and praying. Coming up to them at that very moment, she gave thanks to God and spoke about the child to all who were looking forward to the redemption of Jerusalem.

From these three verses in Luke, the following is known of Anna:

Luke describes Anna as "very old." Many Bibles and older commentaries state that she was 84 years old.[1][2]

The Catholic Church and Eastern Orthodox Church commemorate Anna as a saint, Anna the Prophetess. The Eastern Orthodox Church consider Anna and Simeon the God-Receiver as the last prophets of Old Testament and observes their feast on February 3/February 16 as the synaxis (afterfeast) following the Presentation of Christ, which Orthodox tradition calls "The Meeting of Our Lord and God and Savior, Jesus Christ".[8] Along with Simeon, the prophetess Anna is commemorated on February 3 in the Byzantine rite of the Catholic Church.[9]

Also her figure is drawn in the icons of the Presentation of Christ, together with the Holy Child and the Virgin Mary, Joseph and Simeon the God-Receiver. Orthodox tradition considers that Christ met his people, Israel, in the persons of those two, Simeon and Anna.[10]