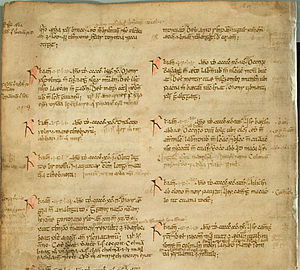 The Annals of Ulster (Irish: Annála Uladh) are annals of medieval Ireland. The entries span the years from AD 431 to AD 1540. The entries up to AD 1489 were compiled in the late 15th century by the scribe Ruaidhrí Ó Luinín, under his patron Cathal Óg Mac Maghnusa on the island of Belle Isle on Lough Erne in the province of Ulster. Later entries (up to AD 1540) were added by others.[citation needed]

Previous annals dating as far back as the 6th century were used as a source for the earlier entries, and later entries were based on recollection and oral history. T.M. Charles-Edwards has claimed that the main source for its records of the first millennium AD is a now lost Armagh continuation of the Chronicle of Ireland.

A century later, the Annals of Ulster became an important source for the authors of the Annals of the Four Masters. It also informs the Irish text Cogad Gáedel re Gallaib.

The Library of Trinity College Dublin possesses the original manuscript; the Bodleian Library in Oxford has a contemporary copy that fills some of the gaps in the original. There are two main modern English translations of the annals – Mac Airt and Mac Niocaill (1983) and MacCarthy (1893).

Several kings are mentioned throughout the Annals of Ulster. The Annals tend to follow the lives of the kings, including important battles, raids, and their ultimate death. Between the years of 847 and 879, three different kings are highlighted. For example: Máel Sechnaill mac Máele Ruanaid, the king of the southern Ui Neill clan from 846–862:

The final entry ends with the entry about his death and includes a poem. It reads “Aed son of Niall, king of Temair, fell asleep on the twelfth of the Kalends of 20 December Nov at Druim Inasclainn in the territory of Conaille.

1. (Twelve days before the melodious Kalends
Of December—a harsh company—
A wonderful person died to your loss(?),
Aed of Ailech, over-king of the Irish.

2. A generous prudent man of shields
Who brought plenty to landed Temair,
Against iron-tipped spears a buckler
From the forge-fire of the land of the sons of Mil.)”[2]

The final entry deviates from the Irish kings and instead tells of the death of Amlaib’s son, Oistín and reads: “Oistín son of Amlaíb, king of the Norsemen, was deceitfully killed by Albann.”[3]

Along with kings and kingdoms, the entries in the Annals of Ulster focus on important places of Ireland such as Armagh, the ecclesiastical capital of Ireland which appears several times throughout the text. Dublin for example, referred to in the text as either Áth Cliath or Duiblinn, is described in the Annals of Ulster with entries ranging from the settlement of Dublin by Vikings ("The heathens still at Duiblinn" in 842.2 and "An encampment of the foreigners of Áth Cliath at Cluain Andobuir" in 845.12) to deaths of notable names ("Carlus son of Conn son of Donnchad was killed in Áth Cliath" in 960.2) to Dublin being ruled by the Irish ("The foreigners returned to Áth Cliath and gave hostages to Brian" in 1000.4).[4]

The Annals of Ulster contain a large amount of historical information on the invasions of the Vikings into Ireland and several specific events are mentioned that are paralleled in other Irish works such as the Cogad Gáedel re Gallaib. The Annals of Ulster documents the Viking invasions one year after the common starting event of the Viking Period, the raiding of Lindisfarne in 793, as mentioned by the Anglo-Saxon Chronicle. The first mentioning of the Vikings is very brief. "794.7 Devastation of all the islands of Britain by heathens,”[6] yet over the course of the annals their attacks become more specific "807.8 The heathens burned Inis Muiredaig and invade Ros Comáin."[7]

The Vikings are called several different names throughout the annals: foreigners, dark or fair-foreigners, heathens, Norsemen, Norse-Irish and Danes. It is often unclear if these titles attribute nationalities or certain alliances as they are used intermixed throughout.

The annals mention the foreigners’ beginnings in Ireland as one of plunder and slave taking. According to the annals, the Norsemen took many slaves in their raids. "821.3 Étar was plundered by the heathens, and they carried off a great number of women into captivity."[8] However, eventually the establish a permanent base in Áth Cliath or Dublin by 841. In "841.4 There was a naval camp at Linn Duachaill from which the peoples and churches of Tethba were plundered. There was a naval camp at Duiblinn from which the Laigin and the Uí Néill were plundered, both states and churches, as far as Sliab Bladma."[9]

Although the Vikings are portrayed as heathens, the Annals describes strife between the Irish against each other and often the foreigners are depicted as allies to various Irish factions. The depiction of warfare involving the "heathens" is not one-sided; in the annals they are often allied with the Irish against other Irish. Some Irishmen are even accused of doing the same sort of raiding as the Viking invaders. In "847.3 Mael Sechnaill destroyed the Island of Loch Muinremor, overcoming there a large band of wicked men of Luigni and Gailenga, who had been plundering the territories in the manner of the heathens."[10]

Several famous battles and characters involving the Vikings can be found within the Annals of Ulster. The Battle of Brunanburh 937.6,[11] the Battle of Tara 980.1,[12] and the Battle of Clontarf 1014.1[13] are all described in brief detail. Some Viking individuals of note mentioned in the annals with parallels in other historical sources are the foreign chieftain Turgeis, beginning in 845,[14] Ímar and Amlaíb, the later progenitors of the Uí Ímair,[15] rulers of Áth Cliath or Dublin. Irish historical figures included within the text are Máel Sechnaill,[16] Muirchertach[17] son of Niall and Brian Boru.[18]