Annals of the Four Masters 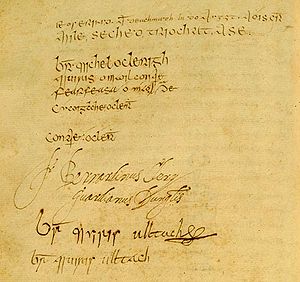 The Annals of the Kingdom of Ireland (Irish: Annála Ríoghachta Éireann) or the Annals of the Four Masters (Annála na gCeithre Máistrí) are chronicles of medieval Irish history. The entries span from the Deluge, dated as 2,242 years after creation[1] to AD 1616.[2]

Due to the criticisms of Tuileagna Ó Maol Chonaire, the text was not published in the lifetime of any of the participants.

The annals are mainly a compilation of earlier annals, although there is some original work. They were compiled between 1632 and 1636 at a Franciscan friary near the Drowes river, now in County Leitrim, and on the border with County Donegal and County Sligo. The patron of the project was Fearghal Ó Gadhra, M.P., a Gaelic lord in Coolavin, County Sligo.

The chief compiler of the annals was Brother Mícheál Ó Cléirigh from Ballyshannon, who was assisted by, among others, Cú Choigcríche Ó Cléirigh, Fearfeasa Ó Maol Chonaire and Peregrine Ó Duibhgeannain. Although only one of the authors, Mícheál Ó Cléirigh, was a Franciscan friar, they became known as 'The Four Friars' or in the original Irish, Na Ceithre Máistrí. The Anglicized version of this was "The Four Masters", the name that became associated with the annals themselves.

The first substantial English translation (starting at AD 1171) was published by Owen Connellan in 1846. The Connellan translation included the annals from the eleventh to the seventeenth centuries. The only version to have a four-colour frontispiece, it included a large folding map showing the location of families in Ireland. This edition, neglected for over 150 years, was republished in the early twenty-first century. The original Connellan translation was followed several years later by a full translation by the historian John O'Donovan. The translation was funded by a government grant of £1,000 obtained by the notable mathematician Sir William Rowan Hamilton while he was president of the Royal Irish Academy.

The Annals are one of the principal Irish-language sources for Irish history up to 1616. While many of the early chapters are essentially a list of names and dates, the later chapters, dealing with events of which the authors had first-hand accounts, are much more detailed.

The reliability and usefulness of the Annals as a historical source has sometimes been questioned by on the grounds that they were limited to accounts of the births, deaths and activities of the Gaelic nobility of Ireland and often ignore wider social trends or events.

On the other hand, the Annals, as one of the few prose sources in Irish from this period, also provide a valuable insight into events such as the Desmond Rebellions and the Nine Years War from a Gaelic Irish perspective.

The Annals are available from CELT in Irish and in English translation.

Full scans of the Annals with O'Donovan's extensive notes, indices and appendices from his 1856 edition can be found at the Internet Archive: