Anne Killigrew (1660–1685) was an English poet. Born in London, Killigrew is perhaps best known as the subject of a famous elegy by the poet John Dryden entitled To The Pious Memory of the Accomplish'd Young Lady Mrs. Anne Killigrew (1686). She was however a skilful poet in her own right, and her Poems were published posthumously in 1686. Dryden compared her poetic abilities to the famous Greek poet of antiquity, Sappho. Killigrew died of smallpox aged 25.

Anne Killigrew was born in early 1660, before the Restoration, at St. Martin's Lane in London. Not much is known about her mother Judith Killigrew, but her father Dr. Henry Killigrew published several sermons and poems as well as a play called The Conspiracy. Her two paternal uncles were also published playwrights. Sir William Killigrew (1606–1695) published two collections of plays and Thomas Killigrew (1612–1683) not only wrote plays but built the theatre now known as Drury Lane. Her father and her uncles had close connections with the Stuart Court, serving Charles I, Charles II, and his Queen, Catherine of Braganza. Anne was made a personal attendant, before her death, to Mary of Modena, Duchess of York. 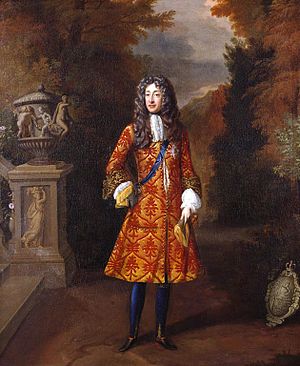 Little is recorded about Anne’s education, but it is known that she kept up with her social class, and she received instruction in both poetry and painting in which she excelled. Her theatrical background added to her use of shifting voices in her poetry. In John Dryden’s Ode to Anne he points out that "Art she had none, yet wanted none. For Nature did that want supply" (Stanza V). Killigrew most likely got her education through studying the Bible, Greek mythology, and philosophy. Mythology was often expressed throughout her paintings and poetry.

Inspiration for Killigrew’s poetry came from her knowledge of Greek myths and Biblical proverbs as well as from some very influential female poets who lived during the Restoration period: Katherine Philips and Anne Finch (also a maid to Mary of Modena at the same time as Killigrew). Mary of Modena encouraged the French tradition of precieuses (patrician women intellectuals) which pressed women’s participation in theatre, literature, and music. In effect, Killigrew was surrounded with a poetic feminist inspiration on a daily basis in Court: she was encompassed by strong intelligent women who encouraged her writing career as much as their own.

With this motivation came a short book of only thirty-three poems published soon after her death by her father. It was not abnormal for poets, especially for women, never to see their work published in their lifetime. Since Killigrew died at the young age of 25 she was only able to produce a small collection of poetry. In fact, the last three poems were only found among her papers and it is still being debated about whether or not they were actually written by her. Inside the book is also a self painted portrait of Anne and the Ode by family friend and poet John Dryden.

The Poet and the Painter 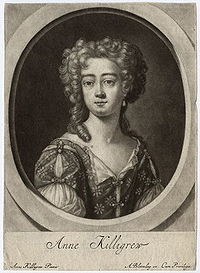 Mezzotint of Anne Killigrew, based on a self portrait she had painted.

Anne Killigrew excelled in multiple media, which was noted by contemporary poet, mentor, and family friend, John Dryden in his dedicatory ode to Killigrew. He addresses her as "the Accomplisht Young LADY Mrs Anne Killigrew, Excellent in the two Sister-Arts of Poësie, and Painting." Scholars believe that Kelligrew painted a total of 15 paintings; however, only four are known to exist today.

Many of her paintings display biblical and mythological imagery. Yet, Killigrew was also skilled at portraits, and her works include a self-portrait and a portrait of James, Duke of York. Some of her poetry references her own paintings, such as her poem "On a Picture Painted by her self, representing two Nimphs of DIANA's, one in a posture to Hunt, the other Batheing." Both her poems and her paintings place emphasis on women and nature, suggesting female rebellion in a male-dominated society. Contemporary critics noted her exceptional skill in both mediums, with John Dryden addressing his dedicatory

Killigrew is best known for being the subject of John Dryden's famous, extolling ode, which praises Killigrew for her beauty, virtue, and literary talent. However, Dryden was one of several contemporary admirers of Killigrew, and the posthumous collection of her work published in 1686 included several additional poems commending her literary merit, irreproachable piety, and personal charm.

Nonetheless, critics often disagree about the nature of Dryden's ode: some believe his praise to be too excessive, and even ironic. These individuals condemn Killigrew for using well worn and conventional topics, such as death, love, and the human condition, in her poetry and pastoral dialogues. In fact, Alexander Pope, a prominent critic, as well as the leading poet of the time, labelled her work "crude" and "unsophisticated." As a young poet who had only distributed her work via manuscript prior to her death, it is possible that Killigrew was not ready to see her work published so soon.

Some say Dryden defended all poets because he believed them to be teachers of moral truths; thus, he felt Killigrew, as an inexperienced yet dedicated poet, deserved his praise. However, Anthony Wood in his 1721 essay defends Dryden's praise, confirming that Killigrew "was equal to, if not superior" to any of the compliments lavished upon her. Furthermore, Wood asserts that Killigrew must have been well received in her time, otherwise “her Father would never have suffered them to pass the Press” after her death.

Then, there is the question of the last three poems that were found among her papers. They seem to be in her handwriting, which is why Killigrew’s father added them to her book. The poems are about the despair the author has for another woman, and could possibly be autobiographical if they are in fact by Killigrew. Some of her other poems are about failed friendships, possibly with Anne Finch, so this assumption may have some validity.

Killigrew died of smallpox on 16 June 1685, when she was only 25 years old. She is buried in the Chancel of the Savoy Chapel (dedicated to St John the Baptist) where a monument was built in her honour, but has since been destroyed by a fire.