From Infogalactic: the planetary knowledge core
Jump to: navigation, search
For her mother, see Anne Beauchamp, 16th Countess of Warwick.

Lady Anne Neville (11 June 1456 – 16 March 1485) was an English queen, the daughter of Richard Neville, 16th Earl of Warwick (the "Kingmaker"). She became Princess of Wales as the wife of Edward of Westminster and then Queen of England as the wife of King Richard III.

After the death of Edward, the Dowager Princess of Wales married Richard, Duke of Gloucester, brother of Edward IV and of George, Duke of Clarence, the husband of Anne Neville's older sister Isabel. Anne Neville became queen when Richard III ascended the throne in June 1483, following the declaration that Edward IV's children by Elizabeth Woodville were illegitimate. Anne Neville predeceased her husband by five months, dying in March 1485. Her only child was Edward of Middleham, who predeceased her.

Anne Neville was born at Warwick Castle, the younger daughter of Richard Neville, 16th Earl of Warwick, and Anne de Beauchamp. Her father was one of the most powerful noblemen in England and the most important supporter of the House of York. Her grandfather's sister, Cecily Neville, was the wife of Richard, Duke of York, who claimed the crown for the House of York.

Much of Anne Neville's childhood was spent at Middleham Castle, one of her father's properties, where she and her elder sister, Isabel, met two younger sons of the Duke of York: Richard, Duke of Gloucester (the future Richard III) and George, Duke of Clarence. Richard especially attended his knighthood training at Middleham since mid-1461 until at least the spring of 1465,[2] or possibly since 1465 until late 1468.[3] It is possible that even at this early stage, a match between the Earl's daughters and the young dukes was being considered.[4] The Duke of York was killed on 30 December 1460 but, with Warwick's help, his eldest son became King Edward IV in March 1461. In July 1469, Lady Isabel married Clarence, while in July 1470, after the Earl of Warwick's flight to France and change of allegiance, Anne Neville was betrothed to Edward of Westminster, the Lancastrian heir to the throne of England, and married to him by the end of the same year.[1] 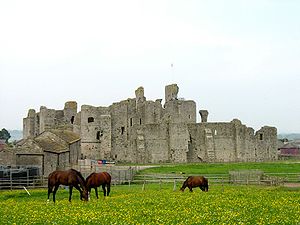 Middleham Castle came in to the possession of the Neville family in 1270.

The Earl of Warwick had been at odds with Edward IV for some time, resenting the rise in the king's favour of the new queen's family, the Woodvilles. In 1469, the earl tried to put his son-in-law George on the throne, but met resistance from Parliament. After a second rebellion against King Edward failed in early 1470, he was forced to flee to France, where he allied himself with the ousted House of Lancaster in 1470. With King Henry VI imprisoned in the Tower of London, the de facto Lancastrian leader was his consort, Margaret of Anjou, who was suspicious of Warwick's motives. To quell these suspicions, Anne Neville was formally betrothed to the son of Henry VI and Margaret of Anjou, Edward of Westminster, at the Château d'Amboise in France. They were married in Angers Cathedral, probably on 13 December 1470, to make Anne Neville the Princess of Wales.

Warwick restored Henry VI to the throne in October 1470, however Edward IV returned to the country in March 1471 and quickly captured London and the person of Henry VI. The mentally troubled Henry VI was taken by Edward IV as a prisoner to the Battle of Barnet, where Warwick was killed on 14 April 1471. Edward IV then incarcerated Henry VI in the Tower of London. Following the decisive Yorkist victory at the Battle of Tewkesbury on 4 May, Henry was reported to have died of "pure displeasure and melancholy," although "The Great Chronicle of London" reported that Richard, Duke of Gloucester, was responsible for his death. As Constable of England, he probably delivered King Edward's order to kill Henry to the Constable of the Tower.[2]

Margaret of Anjou had returned to England with Anne Neville and Prince Edward in April, bringing additional troops. At the Battle of Tewkesbury, Edward IV crushed this last Lancastrian army. Prince Edward was killed in or shortly after the battle, and Anne Neville was taken prisoner. She was taken first to Coventry and then to the house of her brother-in-law the Duke of Clarence in London, while her mother Anne Beauchamp, Warwick's wife, sought sanctuary in Beaulieu Abbey. When the crisis settled down and the Countess wished to be restored to her estates, Edward IV refused her safe conduct to plead her case; she wrote to Queen Elizabeth and several others to no avail.[5]

Anne, now widowed, became the subject of some dispute between George of Clarence and his brother Richard of Gloucester, who still wanted to marry her. Anne Neville and her sister, the Duchess of Clarence, were heiresses to their parents' vast estates. Clarence, anxious to secure the entire inheritance, treated her as his ward and opposed her getting married, which would strengthen her position to claim a share.

There are various accounts of what happened subsequently, including the story that Clarence hid her in a London cookshop, disguised as a servant, so that his brother would not know where she was. Gloucester is said to have tracked her down and escorted her to sanctuary at the Church of St Martin le Grand.[6] In order to win the final consent of his brother George to the marriage, Richard of Gloucester renounced most of Warwick’s land and property, including the earldoms of Warwick (which the earl had held in his wife’s right) and Salisbury and surrendered to Clarence the office of Great Chamberlain of England.[2]

The exact date of the wedding of Anne Neville and Richard, Duke of Gloucester, is not known, although most sources agree that a ceremony took place in the spring of 1472 in the chapel of St Stephen in Westminster Palace.[7][8] The couple made their marital home in the familiar surroundings of Middleham Castle,Yorkshire, after Richard was appointed Governor of the North on the king's behalf. Upon her marriage, Anne was styled Duchess of Gloucester. They had only one child, Edward, born at Middleham allegedly sometime in 1473, but more probably in 1476, .[9] Anne's mother, the dowager Countess of Warwick, joined her daughter's household in 1473 after Richard obtained the king's permission to release his mother-in-law from her guarded sanctuary[10]

In 1478, Anne Neville inherited the Lordship of Glamorgan. The title had been held by her father and on his death had passed to Anne's elder sister Isabel Neville. Females could not exercise the Lordship in their own right, so the title immediately transferred to Isabel's husband, the Duke of Clarence. On his death in February 1478, the title passed to Anne and was henceforth exercised by her husband, Richard of Gloucester until his death, when it passed to the new king, Henry VII.[11] 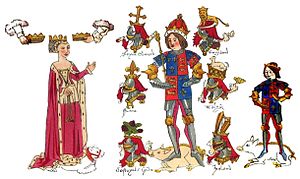 Contemporary illumination (Rous Roll) of Richard III, his queen Anne Neville, and their son Edward, the Prince of Wales.

On 9 April 1483, Edward IV died and Anne's husband Richard was named Lord Protector for his 12-year-old nephew Edward V. But on 25 June 1483, Edward V and his siblings were declared illegitimate and Richard ascended the throne as King Richard III. Anne Neville was crowned alongside her husband on 6 July 1483 by Thomas Bourchier, Archbishop of Canterbury, in the first joint coronation after 175 years. The queen’s train was borne by Margaret, Countess of Richmond, whose son would become Henry VII after defeating Richard at the Battle of Bosworth. Almost the entire peerage of England was present at what was a magnificent spectacle.[12][13] Richard and Anne's son Edward of Middleham was created Prince of Wales in York Minster on 8 September 1483 following their Royal Progress across England.[14]

Anne was on good terms with her mother-in-law Cecily Neville, Duchess of York, with whom she discussed religious works, such as the writings of Mechtilde of Hackeborn.[15]

Edward of Middleham died suddenly in April 1484 at Sheriff Hutton, while his parents were in Nottingham on their way to visit him. Both Richard and Anne were overwhelmed with grief at this news.[16] Anne was particularly heartbroken, and she fell gravely ill only a few months later. 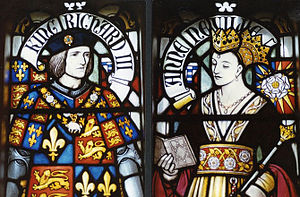 Anne Neville died on 16 March 1485, probably of tuberculosis, at Westminster. The day she died, there was an eclipse,[17] which some took to be an omen of her husband's fall from heavenly grace. She was buried in Westminster Abbey in an unmarked grave to the right of the High Altar, next to the door to the Confessor's Chapel.[18] Richard III is said to have wept at her funeral. Nevertheless, rumours circulated that Richard III had poisoned her in order to marry his niece Elizabeth of York.[19]

Richard sent Elizabeth away from court to Sheriff Hutton and publicly refuted these rumours on 30 March 1485 during an assembly of Lords he summoned at the Hospital of St. John. Addressing them "in a loud and distinct voice", he "showed his grief and displeasure aforesaid and said it never came into his thought or mind to marry in such manner wise, nor willing nor glad of the death of his queen but as sorry and in heart as heavy as man might be …".[20] There is no reason to doubt that Richard's grief over his wife's death was genuine.[21] Documents later found in the Portuguese royal archives show that after Anne's death, Richard's ambassadors were sent on a formal errand to negotiate a double marriage between Richard and the Portuguese king's sister Joanna, of Lancastrian descent, and Elizabeth of York and Joana's cousin Duke Manuel (the future Manuel I).[22]

There was no memorial to Queen Anne until 1960, when a bronze tablet was erected on a wall near her grave by the Richard III Society.

Richard III of England and Anne Neville in Richard III, a historical play by William Shakespeare

Anne Neville appears in three scenes in William Shakespeare's Richard III. In Act I, Scene 2, Richard III persuades her to marry him. In Act IV, Scene 1, just before Richard III's coronation, Anne Neville meets Edward IV's widow and laments her own position. In Act V, Scene 3, Anne Neville is one of the ghosts that appear to Richard III.

The role has been played in film by

Anne Neville is a major character in several historical novels.

She is the title character in:

Anne Neville is a main character in: