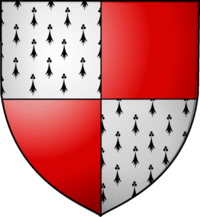 Anne Seymour, Duchess of Somerset (née Stanhope) (c.1497 – 16 April 1587) was the second wife of Edward Seymour, 1st Duke of Somerset (c.1500-1552), who held the office of Lord Protector during the first part of the reign of his nephew King Edward VI, through whom Anne was briefly the most powerful woman in England. During her husband's time as Lord Protector she claimed precedence over the dowager queen Catherine.

Anne's snobbery and pride were considered to be intolerable, yet she was highly intelligent and determined.[7] Antonio de Guaras, a Spanish merchant living in London, would later say of her, that she was "more presumptuous than Lucifer".[8]

Anne Stanhope married Sir Edward Seymour sometime before 9 March 1535. Seymour's first marriage, to Catherine Fillol, had possibly been annulled, but his first wife was probably dead by then. Edward Seymour was the eldest brother of Jane Seymour, the third wife of Henry VIII. Shortly after the king's marriage to Jane in June 1536, Edward Seymour was elevated to the peerage as Viscount Beauchamp. In October 1537, after the birth of his royal nephew Edward, he was created Earl of Hertford. In 1547, he became a duke, so Anne became the Duchess of Somerset.

Life in the royal court 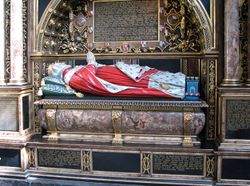 Tomb of Anne Seymour in Westminster Abbey. The ermine lining of her peerage robe is exposed as a play on her paternal arms of Stanhope: Quarterly ermine and gules,

shown on escutcheons behind impaled by Seymour and impaling Bourchier. On the base are shown 4 Bourchier knots

Anne Seymour was present at the wedding ceremony of Henry VIII and Catherine Parr on 12 July 1543.[10] After Henry VIII's death, her husband acted as king in all but name. With this power, the Duchess of Somerset considered herself the first lady of the realm, claiming precedence over Henry VIII's widow, following the latter's marriage to the Duke of Somerset's brother, Thomas Seymour.

The Duchess considered that Catherine Parr forfeited her rights of precedence when she married the younger brother of the Duchess's husband.[11] She refused to bear Catherine's train, and even physically tried to push her out of her place at the head of their entrances and exits at court.[12] The Duchess was quoted as having said of Catherine, "If master admiral (Thomas Seymour) teach his wife no better manners, I am she that will".[13] Catherine, in her turn, privately referred to her sister-in-law as "that Hell".[14] Catherine Parr won the battle by invoking the Third Succession Act which clearly stated that she had precedence over all ladies in the realm; in point of fact, as regards precedence, the Duchess of Somerset came after Queen Catherine, Princess Mary, Princess Elizabeth and Anne of Cleves. The Duchess, who was described as a "violent woman", wielded considerable power for a short time, which later would reflect negatively on her husband's reputation.

As Lord Protector, Edward Seymour wielded almost royal authority. However, he lost his position of power following a show-down between the Privy Council and himself in October 1549. He and his wife were imprisoned in the Tower of London. The Duchess was released after a short time,[15] Somerset himself in January 1550.[16] According to the Imperial ambassador Jehan de Scheyfye, Anne Seymour had made daily visits to the house of the de facto new ruler, John Dudley, Earl of Warwick, who soon allowed Somerset to rejoin the Privy Council. The Duchess of Somerset and the Countess of Warwick then arranged a marriage between their respective eldest son and daughter, Anne Seymour and John Dudley.[17] Somerset fell again into disgrace in October 1551, when he was arrested on charges of conspiring against Warwick, who had recently been created Duke of Northumberland. Somerset was convicted of felony on 1 December 1551 and beheaded on 22 January 1552 on Tower Hill. The Duchess of Somerset had been arrested with her husband and continued in the Tower until 30 May 1553.[18] After Mary I's accession in July and the attainder of the Duke of Northumberland she was allowed to choose from the Dudley family's confiscated household stuffs.[19]

Anne Seymour married secondly Francis Newdigate (d. 26 January 1582) of Hanworth, Middlesex, who had been steward to her late husband. Newdigate was a younger son of John Newdigate, of Harefield, Middlesex.[20] Little is known of their life together.

Anne Seymour died at Hanworth Palace,[21] Middlesex, on 16 April 1587, and was buried in Westminster Abbey,[22] where her tomb with its painted effigy can be viewed.

She is played by Emma Hamilton in the historical fiction series The Tudors in which her character is based partly on Edward Seymour's first wife, Catherine Fillol, who is rumoured to have had an affair with her father-in-law, and partly on the actual Anne Stanhope. In the series Anne is depicted as a woman who sleeps with many men and is known in France as a "woman of many talents" according to the Earl of Surrey. Her affairs on the show include Sir Francis Bryan and Sir Thomas Seymour (her brother-in-law). In the show, as a result of her affair with Sir Thomas, she has an illegitimate child with him, who is also named Thomas.