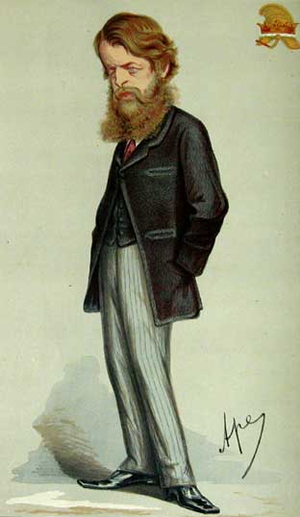 Simple and unassuming himself, yet magnificent and generous towards his fellow men, he is the very Prince of Dukes - The Duke of Sutherland, by Carlo Pellegrini, 1870

Anne Sutherland-Leveson-Gower, Duchess of Sutherland VA (21 April 1829 – 25 November 1888), 1st Countess of Cromartie in her own right and known as the Marchioness of Stafford from 1849 to 1861, was a British peeress.

Born Anne Hay-Mackenzie, she was the daughter of John Hay-Mackenzie of Newhall and Cromarty and the great-great-granddaughter of George Mackenzie, 3rd Earl of Cromartie (who took part in the Jacobite rising of 1745 and was attainted in 1746).

On 27 June 1849 she married George Sutherland-Leveson-Gower, Marquess of Stafford, eldest son of George Sutherland-Leveson-Gower, 2nd Duke of Sutherland. He succeeded as third Duke of Sutherland on 22 February 1861. The Duchess of Sutherland had succeeded to her father's lands in the year of her marriage. On 21 October 1861 the title held by her great-great-grandfather was revived when she was created Countess of Cromartie in her own right, with remainder to her younger sons and her daughters. She later served as Mistress of the Robes to Queen Victoria from 1870 to 1874, and was awarded the Order of Victoria and Albert (3rd class).[1]

On her death in 1888, aged 59, she was succeeded in her earldom according to the special remainder by her younger son Lord Francis Leveson-Gower. The Duke of Sutherland died in 1892 and was succeeded by their eldest surviving son Cromartie.

She died at the family's London mansion, Stafford House, St James' Park, and was buried at Babbacombe Cemetery, Torquay, Devon.[1]