For other women named Anne of Austria, see Anna of Austria (disambiguation)

Anne of Austria (22 September 1601 – 20 January 1666) was queen consort of France and Navarre, regent for her son, Louis XIV of France, and a Spanish and Portuguese Infanta by birth. During her regency (1643–1651), Cardinal Mazarin served as France's chief minister. Accounts of French court life of her era emphasize her difficult marital relations with her husband Louis XIII, her closeness to her son Louis XIV, and her disapproval of her son's marital infidelity to her niece Maria Theresa. 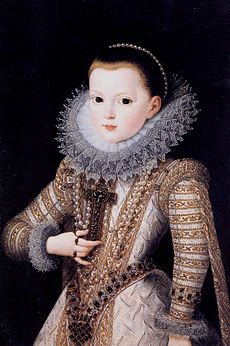 Anne at the age of six, 1607. The pleated ruff that surrounds her neck and frames her face was made of yards and yards of expensive lace stiffened with starch. It was probably held in position by a wire frame attached to the collar of her dress.

Born at Benavente Palace in Valladolid, Spain, and baptised Ana María Mauricia, she was the eldest daughter of King Philip III of Spain and his wife Margaret of Austria. She held the titles of Infanta of Spain and of Portugal (since her father was king of Portugal as well as Spain) and Archduchess of Austria. In spite of her birth in Spain, she was referred to as Anne of Austria because the rulers of Spain belonged to the House of Austria.[1]

Anne was raised mainly at the Royal Alcazar of Madrid. Exceptionally for a royal princess, Anne grew up close to her parents, who were very religious. She was raised to be religious too, and was often taken to visit monasteries during her childhood. In 1611, she lost her mother, who died in childbirth. Despite her grief, Anne did her best to take care of her younger siblings, who referred to her with affection as their mother.

Anne was betrothed at age eleven to King Louis XIII of France. Her father gave her a dowry of 500,000 crowns and many beautiful jewels.[2] For fear that Louis XIII would die early, the Spanish court stipulated that she would return to Spain with her dowry, jewels, and wardrobe if he did die.[2] Prior to the marriage, Anne renounced all succession rights she had had for herself and her descendants by Louis, with a provision that she would resume her rights should she be left a childless widow. On 24 November 1615, Louis and Anne were married by proxy in Burgos while Louis's sister, Elizabeth of France, and Anne's brother, Philip IV of Spain, were married by proxy in Bordeaux. These marriages followed the tradition of cementing military and political alliances between France and Spain that began with the marriage of Philip II of Spain to Elisabeth of Valois in 1559 as part of the Peace of Cateau-Cambrésis. Anne and Elisabeth were exchanged on the Isle of Pheasants between Hendaye and Fuenterrabía. She was lively and beautiful during her youth. She was also a noted equestrian, a taste her son, Louis, would inherit. At the time, Anne had many admirers, including the handsome Duke of Buckingham, although her intimates believed their flirtations remained chaste. 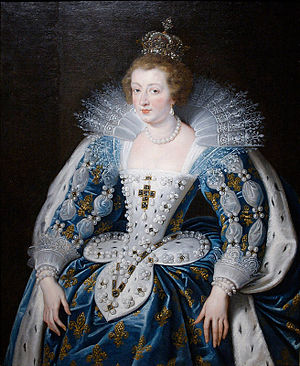 Anne and Louis, both fourteen years old, were pressured to consummate their marriage in order to forestall any possibility of future annulment, but Louis ignored his bride. Louis's mother, Marie de' Medici, continued to conduct herself as queen of France, without showing any deference to her daughter-in-law. Anne, surrounded by her entourage of high-born Spanish ladies-in-waiting, continued to live according to Spanish etiquette and failed to improve her French.

In 1617, Louis conspired with Charles d'Albert, Duke of Luynes, to dispense with the influence of his mother in a palace coup d'état and had her favorite Concino Concini assassinated on 26 April of that year. During the years he was in the ascendancy, the Duke of Luynes attempted to remedy the formal distance between Louis and his queen. He sent away the Spanish ladies and replaced them with French ones, notably the Princesse of Conti (Louise Marguerite of Lorraine) and his wife Marie de Rohan-Montbazon, with whom he organized court events that would bring the couple together under amiable circumstances. Anne began to dress in the French manner, and in 1619 Luynes pressed the king to bed his queen. Some affection developed, to the point where it was noted that Louis was distracted during a serious illness of the queen.

A series of stillbirths disenchanted the king and served to chill their relations[according to whom?]. On 14 March 1622, while playing with her ladies, Anne fell on a staircase and suffered her second stillbirth. Louis blamed her for the incident and was angry with the Duchess of Luynes for having encouraged the queen in what was seen as negligence. Henceforth, the king had less tolerance for the influence that the duchess had over Anne, and the situation deteriorated after the death of her husband Luynes in December 1621. The king's attention was monopolized by his war against the Protestants, while the queen defended the remarriage of her inseparable companion Marie de Rohan-Montbazon, center of all court intrigue, to her lover Claude, Duke of Chevreuse, in 1622.

Louis turned now to Cardinal Richelieu as his advisor. Richelieu's foreign policy of struggle against the Habsburgs, who surrounded France on two fronts, inevitably created tension between himself and Anne, who remained childless for another sixteen years, while Louis depended ever more on Richelieu, who was his first minister from 1624 until his death in 1642.

Under the influence of Marie de Rohan-Montbazon, the queen let herself be drawn into political opposition to Richelieu and became embroiled in several intrigues against his policies. Vague rumors of betrayal circulated in the court, notably her supposed involvement with the conspiracies of the Count of Chalais that Marie organized in 1626, then those of the king's treacherous favorite, Cinq-Mars, who had been introduced to him by Richelieu.

In 1635, France declared war on Spain, placing the queen in an untenable position. Her secret correspondence with her brother Philip IV of Spain passed beyond the requirements of sisterly affection. In August 1637, Anne came under so much suspicion that Richelieu forced her to sign covenants regarding her correspondence, which was henceforth open to inspection. Her favourite Marie was exiled and close watch was kept on the queen.

Conventual Patronage and the Val-de-Grâce

As part of her role as a member of Spanish royalty Anne visited churches and convents across France, where she met Marguerite de Veny d'Arbouze at the Notre-Dame-de-Grâce de la-Ville-d'Evêque. As well as securing from the King the position of Abbess at a the Benedictine Val-de-Grâce de Notre-Dame-de-la-Crèche for Marguerite in 1618, Anne purchased lands and transferred the convent to Paris in 1621. She was named the new foundress of the convent in the same year. Her patronage included the building of a small church and an apartment for herself between 1620-1625, against the wishes of both Louis and Cardinal Richelieu.[3]

The Val-de-Grâce was commissioned by Anne in 1645, which was undertaken initially by Francois Mansart, who was dismissed in 1646 and succeeded by Jacques Lemercier. As well as being her main place of worship, the Val-de-Grâce displays dynastic significance for Anne, whose role as Queen Regent during La Fronde. In 1662 Anne acquired the hearts of her ancestors Anne Elizabeth of France, placed in the Chapel of Saint Anne. She herself was interred in 1666 in the Chapel of Saint Sacrament, along with the body of Marguerite d'Arbouze.[4]

Birth of an heir 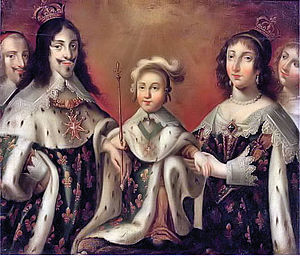 They saw in the arms of this princess whom they had watched suffer great persecutions with so much staunchness, their child-King, like a gift given by Heaven in answer to their prayers.

Despite a climate of distrust, the queen became pregnant once more, a circumstance that contemporary gossip attributed to a single stormy night that prevented Louis from travelling to Saint-Maur and obliged him to spend the night with the queen.[6] Louis XIV was born on 5 September 1638, an event that secured the Bourbon line. At this time, Anne was 37.[5] The official newspaper Gazette de France called the birth "a marvel when it was least expected".[5]

The birth of a second son failed to re-establish confidence between the royal couple. It was at Saint-Germain-en-Laye on 21 September 1640 that Anne gave birth to her second son, Philippe de France, Duke of Anjou, and later the founder of the modern House of Orléans.

Richelieu made Louis XIII a gift of his palatial hôtel, the Palais Cardinal, north of the Louvre, in 1636, but the king never took possession of it. Anne fled the Louvre Palace to install herself there with her two small sons and remained as regent (hence the name Palais-Royal that the structure still carries). Louis tried to prevent Anne from obtaining the regency after his death, which came in 1643, not long after that of Richelieu. 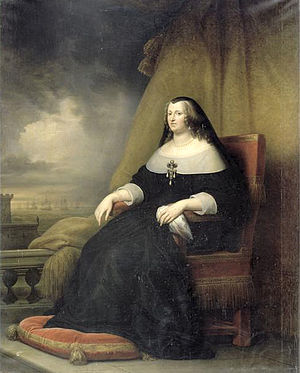 Anne of Austria widow, by Charles de Steuben, Versailles. She never lost her love for magnificent jewellery, and she especially loved bracelets, which emphasized her famously beautiful hands

Anne was named regent upon her husband's death in spite of her late husband's wishes. With the aid of Pierre Séguier, she had the Parlement de Paris revoke the will of the late king, which would have limited her powers. Their four-year-old son was crowned King Louis XIV of France. Anne assumed the regency but to general surprise entrusted the government to the chief minister, Cardinal Mazarin, who was a protégé of Cardinal Richelieu and figured among the council of the regency. Mazarin left the Hôtel Tubeuf to take up residence at the Palais Royal near Queen Anne. Before long he was believed to be her lover, and, it was hinted, even her husband.

With Mazarin's support, Anne overcame the aristocratic revolt, led by Louis II de Bourbon, Prince de Condé, that became known as the Fronde. In 1651, when her son Louis XIV officially came of age, her regency legally ended. However, she kept much power and influence over her son until the death of Mazarin. 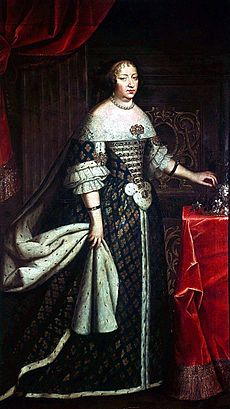 In 1659, the war with Spain ended with the Treaty of the Pyrenees. The following year, peace was cemented by the marriage of the young King to Anne's niece, the Spanish Habsburg princess Maria Theresa of Spain.

In 1661, the same year as the death of Mazarin, an heir to the throne was born, Anne's first grandchild Louis. Many other children would follow, but all would die in the legitimate line except for Louis. Some time after, Anne retired to the convent of Val-de-Grâce, where she died of breast cancer five years later. Her lady-in-waiting Madame de Motteville wrote the story of the queen's life in her Mémoires d'Anne d'Autriche. Many view her as a brilliant and cunning woman and she is one of the central figures in Alexandre Dumas, père's novel, The Three Musketeers and its sequels.

The couple had the following children:

She is one of the central figures in Alexandre Dumas's novel, The Three Musketeers and its sequels Twenty Years After and The Vicomte de Bragelonne and has thus been portrayed in countless film adaptations.

She is portrayed by Alexandra Dowling in the BBC series The Musketeers (2014).