Anne of Kiev (born Anna Yaroslavna, also called Agnes; c. 1030 – 1075) was the Ruthenian queen consort of Henry I of France from 1051 to 1060, and regent for her son, Philip I of France. Her parents were Yaroslav the Wise, Grand Prince of Kiev and Novgorod, and Ingegerd Olofsdotter of Sweden, his second wife. Anne founded St. Vincent Abbey in Senlis.

After the death of his first wife, Matilda of Frisia, King Henry searched the courts of Europe for a suitable bride, but could not locate a princess who was not related to him within legal degrees of kinship. At last he sent an embassy to distant Kiev, which returned with Anne (also called Agnes). Anne and Henry were married at the cathedral of Reims on May 19, 1051.[1] 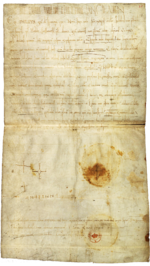 A diploma signed by Anne and her son Philip in 1063.

Anna could ride a horse, was knowledgeable in politics, and actively participated in governing France, especially after her husband died. Many French documents bear her signature, written in old Slavic language ("Ана Ръина", that is, "Anna Regina", "Anna the Queen"). Pope Nicholas II, who was greatly surprised with Anne's great political abilities, wrote her a letter:

"Honorable lady, the fame of your virtues has reached our ears, and, with great joy, we hear that you are performing your royal duties at this very Christian state with commendable zeal and brilliant mind." Henry the First respected his wife Anna so much that his many decrees bear the inscription "With the consent of my wife Anna" and "In the presence of Queen Anna". French historians point out that there are no other cases in the French history, when Royal decrees bear such inscriptions.

Anne is often credited with introducing the name "Philip" to royal families of Western Europe, as she bestowed it on her first son; she might have imported this Greek name (Philippos, from philos and hippos, meaning "loves horses") from her Eastern Orthodox culture.[2]

For six years after Henry's death in 1060, she served as regent for Philip, who was only eight at the time. She was the first queen of France to serve as regent. Her co-regent was Count Baldwin V of Flanders. Anne was a literate woman, rare for the time, but there was some opposition to her as regent on the grounds that her mastery of French was less than fluent.

A year after the king's death, Anne, acting as regent, took a passionate fancy for Count Ralph III of Valois, a man whose political ambition encouraged him to repudiate his wife to marry Anne in 1062. Accused of adultery, Ralph's wife appealed to Pope Alexander II, who excommunicated the couple. The young king Philip forgave his mother, which was just as well, since he was to find himself in a very similar predicament in the 1090s. Ralph died in September 1074, at which time Anne returned to the French court. She died in 1075, was buried at Villiers Abbey, La Ferte-Alais, Essonne and her obits were celebrated on 5 September. All subsequent French kings were her progeny.

With Henry I of France: