The Annexation of Santo Domingo was an attempted treaty during the later Reconstruction Era, initiated by United States President Ulysses S. Grant in 1869, to annex "Santo Domingo" (as the Dominican Republic was commonly known) as a United States territory, with the promise of eventual statehood. President Grant feared some European power would take the island in violation of the Monroe Doctrine. He privately thought annexation would be a safety valve for African Americans who were suffering persecution in the US, but he did not include this in his official messages. Grant speculated that the acquisition of Santo Domingo would help bring about the end of slavery in Cuba and elsewhere. Militarily he wanted a US naval port in the Dominican Republic which would also serve as protection for a projected canal across Nicaragua.

In 1869, Grant commissioned his private secretary Orville E. Babcock and Rufus Ingalls to negotiate the treaty of annexation with Dominican president Buenaventura Báez. The annexation process drew controversy: opponents Senator Charles Sumner and Senator Carl Schurz denounced the treaty vehemently, alleging it was made only to enrich private American and island interests and to politically protect Báez. Grant had authorized the US Navy to protect the Dominican Republic from invasion by neighbouring Haiti while the treaty annexation process took place in the US Senate. The movement for annexation appeared to have been widely supported by the inhabitants of the Dominican Republic, according to the plebiscite ordered by Báez, who believed the Dominican Republic had better odds of survival as a US protectorate and could sell a much wider range of goods to the US than could be sold in European markets. The country's unstable history was one of invasion, colonization, and civil strife.

A treaty was drafted by Secretary of State Hamilton Fish that included the annexation of the country itself and the purchase of Samaná Bay for two million American dollars. Also included and supported by Grant was the provision that the Dominican Republic could apply for statehood. When debated in the Senate, Sumner staunchly opposed the treaty, believing the annexation process was corrupt and that the Dominican Republic was politically unstable, having a history of revolution. Sumner believed that Báez was a corrupt despot and that the use of the US Navy by Grant during the treaty negotiation to protect Santo Domingo was illegal. Sumner said that the annexationists wanted the whole island and would also absorb the independent black nation of Haiti. Schurz opposed acquisition because he did not favor mixed race people becoming US citizens.[1] The treaty ultimately failed to reach the two-thirds vote needed (the vote was a tie). In order to vindicate the failed treaty annexation, Grant sent a committee, authorized by Congress and including African American Frederick Douglass, that investigated and produced a report favourable to annexation of the Dominican Republic into the United States.

The annexation treaty failed because there was little support for it outside Grant's circle. The defeat of the treaty in the Senate directly contributed to the division of the Republican party into two opposing factions during the election of 1872: the Radical Republicans (composed of Grant and his loyalists) and the Liberal Republicans (composed of Schurz, Sumner, Horace Greeley as presidential candidate, and other opponents of Grant). 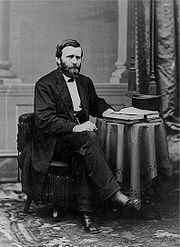 In 1867, during President Andrew Johnson's Administration, the Dominican government, under threat of Haitian invasion, had asked to be annexed by the United States. However, Congress was unwilling to comply to any proposal made by Johnson.[2]

In April 1869, Joseph W. Fabens, a New England businessman representing the Dominican Republic, asked Secretary of State Fish, that the Dominican Republic, then known as Santo Domingo, be annexed to the United States and able to apply for statehood.[3] President Grant, initially, did not have any interest in annexation. However, when Grant learned the US Navy had interest in acquiring Samaná Bay as a coaling station, he became interested.

Fish appointed Benjamin P. Hunt with diplomatic authority to look into the Dominican Republic's debt and whether the people actually desired to join the United States. Hunt, however, fell ill and could not make the journey. Grant then sent his aide, Brevet Brigadier General Orville E. Babcock to gather information on the Dominican Republic. Rather than official diplomatic authority, President Grant personally gave Babcock special agent status with a personal introduction letter for Dominican President Buenaventura Báez.[4]

In addition to the coaling station, President Grant viewed that the Dominican Republic had immense resources and would give thousands of jobs to emigrant African American laborers; in addition to benefitting exports from Northern farms and manufacturers.[5] Grant privately speculated that US control would help compel Brazil, Puerto Rico, and Cuba to abolish slavery.[5] Grant also speculated that if African Americans from the Southeastern United States had the option of emigration to the island, violent European American supremacist groups in the South, such as the Ku Klux Klan, would have to curb their use of violence against African Americans or lose their cheaper labour. Grant, however, was cautious in directly advocating African American emigration to the Dominican Republic.[5] Fearing Britain might take control, Grant also mentioned the need to maintain the Monroe Doctrine.[6]

In September 1869, Babcock returned to Washington with a draft treaty of annexation. President Grant's Cabinet was stunned, not knowing that Babcock had planned to draw up an annexation treaty. Grant presented Babcock's informal treaty for his Cabinet to read, however, no Cabinet member offered any discussion on the treaty. Grant then asked Sec. Fish to draw up a formal diplomatic treaty, since Babcock did not have diplomatic authority.[7] Having not been consulted on the Dominican treaty process, Sec. Fish was ready to resign from the Cabinet, however, President Grant intervened having told Fish he would have complete control of the State Department, except for the Dominican Republic annexation treaty. Sec. Fish and Grant privately agreed that Fish would remain on the Cabinet and support Dominican annexation while President Grant would not support Cuban belligerence during the Ten Years' War. On October 19, 1869, Sec. Fish drew up a formal treaty; the United States would annex the Dominican Republic, pay $1,500,000 on the Dominican national debt, offer the Dominican Republic the right to U.S. statehood, and the U.S. would rent Samaná Bay at $150,000 per annum for 50 years.[7] According to Grant's biographer, Jean Edward Smith, President Grant initially erred by not gaining U.S. public support and by keeping the treaty process secret from the U.S. Senate.[7] On January 2, 1870 prior to the formal treaty being submitted to the Senate, President Grant made an unprecedented visit to Senator Charles Sumner at his home in Washington, D.C.[8] Grant specifically informed Sumner of the Dominican Republic annexation treaty hoping for Sen. Sumner's support.[9] Sen. Sumner was the powerful Chairman of the Senate Foreign Relations Committee and his support for the Dominican Republic treaty was crucial for passage in the Senate.[10] The dialogue between the two men has been the subject of debate and controversy since the meeting.[9] Different sources vary as to what exactly Sumner had said, however, Grant optimistically had walked away having believed Sumner had supported his treaty. Sumner stated that he only told Grant that he was a "Republican and an Administration man".[9][11]

On January 10, 1870 President Grant formally submitted Sec. Fish's Dominican Republic annexation treaty to the U.S. Senate.[12] The treaty was stalled in the Senate until Sen. Sumner's Foreign Relations Committee started hearings in mid February, 1870.[12] Sec. Fish noted that the Senate was reluctant to pass any measures initiated by the Executive Branch.[12] Sen. Sumner allowed the treaty to be debated openly on the Committee without giving his own opinion. However, on March 15, Senator Sumner's Foreign Relations Committee in a closed session voted to oppose the treaty 5 to 2.[12] On March 24, in another closed session, Sen. Sumner came out strongly against the treaty. Sen. Sumner opposed the treaty believing annexation would be expensive, launch an American empire in the Caribbean, and would diminish independent Afro-Hispanic and African creole republics in the Western Hemisphere.[12] Grant met with many Senators on Capitol Hill hoping to rally support for the Treaty, however, to no avail.[13] Grant refused the suggestion that the treaty drop the Dominican statehood clause.[14] Finally on June 30, 1870 the Senate defeated the Dominican Republic Annexation treaty by a vote of 28 to 28.[14] Eighteen Senators had joined Sen. Sumner to defeat the Dominican annexation treaty.[14]

President Grant was livid at the treaty's failure to pass the Senate and blamed Sen. Sumner's opposition for the defeat; Grant having believed Sumner had originally agreed to support the treaty at their January 2, 1870 meeting.[15] Grant then retaliated by firing U.S. Ambassador to Britain, John Lothrop Motley, Sen. Sumner's close friend.[16] Then in March 1871, President Grant having influence in the Senate got his allied Senators to remove Sumner as Chairman of the Senate Foreign Relations Committee.[17] President Grant was able to get Congress to allow an investigation Commission to be sent and make an objective assessment as to whether annexation would be beneficial to both the United States and the Dominican Republic. The Commission, sent in 1871, included civil rights activist Frederick Douglass and reported favorably on the annexation of the Dominican Republic to the United States.[18] The Commission, however, failed to generate enough enthusiasm in the Senate to overcome opposition to Dominican Republic annexation.[17] The whole affair never took into account the wishes of the Dominican people who desired to remain independent.[19]