AnsaldoBreda S.p.A. is a rail transport engineering company based in Italy. The company designs and manufactures railway and mass transit vehicles. In February 2015, Finmeccanica agreed to sell AnsaldoBreda to Hitachi.[1]

In 1853, the company Gio. Ansaldo & C. was registered in Genoa as a manufacturer of steam locomotives, rail rolling stock and steam engines. The company was supported by the Minister of Finance, Camillo Benso, Count of Cavour, who aimed to reduce the State of Savoy's dependence on imported trains and rolling stock.[2]

In 1989 both Ansaldo and Breda participated in a consortium for the design and manufacturing of the ETR500 high speed train.

AnsaldoBreda was formed in 2001 by the merger of Ansaldo Trasporti and Breda Costruzioni Ferroviarie,[4] and is part of the Finmeccanica group.[5] It has production sites at four locations in Italy: Naples, Reggio Calabria, Palermo, and Pistoia.

The company employs about 2,400 people.[4] Salvatore Bianconi was the Chief Executive Officer of AnsaldoBreda from 2008 to 2011, when he was succeeded by Maurizio Manfellotto.[6] 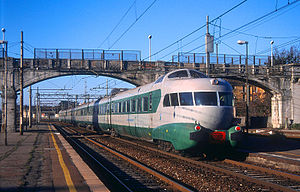 Ansaldo entered the age of the steam locomotive in 1854 with its model FS113, also known as Sampierdarena.

In 1908 SIEB's thousandth locomotive was built, a model FS 685 with serial number 600 [3] now preserved in the Leonardo da Vinci Museum of Science and Technology in Milan. It used Caprotti valve gear.[7]

In 1936 Breda (SIEB) entered the electric locomotive era with the production of the FS Class ETR 200 series electric multiple unit. In 1939 this type set the land speed record for rail vehicles[8] at 203 km/h (126 mph).[9] Although only 18 trains of this type were constructed they remained in service for a long time until they were finally withdrawn from service in 1993.

In 1976 the FS ETR 400 entered service. Fiat Ferroviaria manufactured the body and bogies, whilst Ansaldo produced the power unit. It was the first train in the world featuring active body tilting to enter commercial service and was capable of speeds of up to 250 km/h (160 mph).

The TREVI Consortium, of which Ansaldo and Breda Costruzioni Ferroviarie were members, introduced the high speed FS ETR 500 series in 1989 . The first high-speed trains to run on Turkish rails were two ETR 500 train sets leased from Trenitalia of Italy and were used for testing the completed part of the high-speed railway network between Eskişehir and Ankara on April 23, 2007.[10] During the tests, ETR 500 Y2 achieved the current rail speed record in Turkey, reaching 303 km/h.[11] The train was capable of exceeding 300 km/h (190 mph). It reached 362 km/h (225 mph) in the Monte Bibele tunnel between Florence and Bologna in 2009, setting a speed record for trains in a tunnel.[12]

The first high speed train developed and produced by AnsaldoBreda without other partners was the V250 which was developed for use on the Dutch and Belgian railways. The trains failed after three weeks and are taken out of service. All are returned to AnsaldoBreda. The trains will not be used by NMBS and NS and are for sale at AnsaldoBreda.

Another high speed train Frecciarossa 1000 high speed train was developed in a consortium with Bombardier Transportation.[13][14] The first ETR1000 was christened Mennea in honour of the Italian athlete Pietro Mennea[15] who had died five days earlier. Besides the construction of locomotives, AnsaldoBreda manufactures railway cars, trams, and trains for commuter rail, high-speed rail, and main lines.[16] AnsaldoBreda has also developed a driverless multiple unit train.

AnsaldoBreda is a loss-making business; Finmeccanica is keen to divest it, or sell assets, or find some other way to relieve itself of the AnsaldoBreda burden.[17][18] 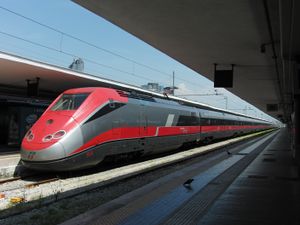 The ETR 500 "Frecciarossa" of the Italian Railways 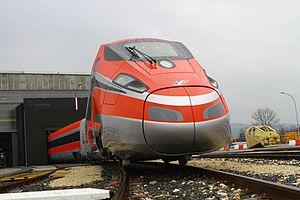 Delays in the delivery of trains to Denmark

Delivery of 83 IC4 trainsets for the Danish State Railways DSB was originally planned for 2003-2006. A primary settlement was reached in May 2009. Danish State Railways shall receive the uncompleted trains from AnsaldoBreda, complete the trains itself, and shall certify the trains for public usage itself. AnsaldoBreda will pay back 2.25 billion DKK (300 million Euro).[50]

On 2 July 2012, the DSB announced that the Transportation Authority had approved Denmark's railway operator to put back into operation the fleet of 37 IC4s which had been withdrawn from service in November 2011.[51]

In December 2011, it was reported that one of the missing IC4 trainsets planned for delivery in Denmark was found in Libya.[52] Reportedly, AnsaldoBreda and then Italian Prime Minister Silvio Berlusconi gave Libyan dictator Muammar Gaddafi the trainset as a present on the occasion of the 40th anniversary of Gaddafi's revolution in 2009.[53][54]

A secondary settlement was reached on 18 December 2012 between AnsaldoBreda and Danish railways. AnsaldoBreda will pay 98 million Euro, provide additional spare parts and upgrade the train control and management system.

The IC4 trains have seen many technical problems during their time in service. A brake failure caused a collision even though the train drove at 30 km/hour over a distance of 121,5 meters.[55] Smoke meant that passengers had to be evacuated.[56] High levels of noise in the cabins meant that modifications had to be made to all delivered trains. Recordings can be heard here. Faulty and incomplete Train Control and Management System (TCMS software) has caused researchers to deem the train unfit for service.[57] And among other things; cracks in axles, faulty sensors and a faulty generator which necessitated an evacuation.

V250 train units were delivered to NS over five years later than originally contracted. Soon after the trains went into service in the Netherlands and Belgium, the V250 suffered a number of technical problems. When the first snow fell in the winter of 2012/13, some V250 trains started losing parts of their bottom plates due to ice build-up. Consequently, the Belgian railway company NMBS/SNCB declared the V250 unsafe, and the trains were taken out of commercial service on 16 January 2013.[58] Dutch railways is now seeking compensation for damages[59] and Dutch politicians have called for a parliamentary inquiry into the problems with the V250 train quality issues and AnsaldoBreda's failure to rectify them in a timely manner. On 22 January Belgian railways called on AnsaldoBreda to fix all deficiencies that had been independently identified with the V250 units within 3 months, as agreed in the purchase contract, or the contract would be declared void.[60]

In May 2013, the Belgian railway company cancelled its contract with AnsaldoBreda, after a technical examination of a pair of V250 train halves. The inspections yielded 1159 and 2019 deficiency points, where a total of 9 per full train was the permitted tolerance before rejection. The report mentioned, amongst others, the following defects:[61][62] during a test run, an iron plate of the roof bent towards the overhead wire, axles were severely rusted, with a risk of breaking in moving trains,[63] the brakes were not suited for high-speed trains, wiring was not shielded from rain and snow, a bottom plate came loose and fell down on the railtrack, batteries overheated in carriages that had been already taken out of service, resulting in fire and subsequent scorches in the carriages, earthing points were wrongly connected, causing electric driven heavy oxidation, the door sliding mechanisms were faulty, assembly varied from train to train. On the same day the report was published, the Belgian public broadcasting organizations RTBF and VRT got hold of photographs showing the wrecked conditions the V250 trains were in.[64][65] However, because of major technical problems with these trains, the trains were taken out of rotation within weeks after the start of the service. On the 31st of May 2013, the NMBS/SNCB cancelled the Fyra project entirely.[66][67] On June 3, NS also announced it was stopping operation of V250 trains. According to their survey of the trains it would take at least 17 months to repair all construction flaws, and entry into service would not be expected before 2018.[68] In addition, even if trains were to be repaired, the maintenance cost would be much higher and the lifetime of the trains much lower than agreed in the contracts with AnsaldoBreda. It is currently unlikely that the V250 will enter commercial service again. In a response to the Dutch and Belgian complaints about damage to the trains, AnsaldoBreda blamed the operators for being irresponsible in running the trains at the certified top speed of 250 km/h in winter,[69] and not performing the recommended daily maintenance.[70] Belgian rail operators claim the latter is not true, and that the problems encountered can only be caused by structural problems with the trains.[71]

On March 17, 2014 NS announced a settlement with AnsaldoBreda had been reached. The 9 NS trains will be returned to AnsaldoBreda for a refund of 125 Million Euro, 88 Million Euro less than originally paid. NS will receive an additional compensation for each resold unit to a maximum of 21 Million Euro.[72]