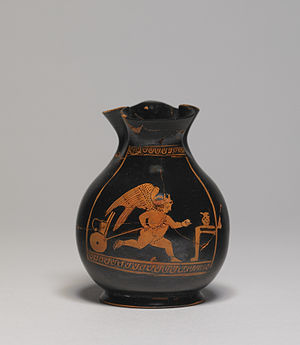 Small terracotta wine vessels such as this one (c. 410 BC) were given as gifts during the Anthesteria. They often depict children at play or mimicking adults, here a chubby Eros pulling a toy cart. (Walters Art Museum)

Anthesteria or the Anthesteria (Greek: Ἀνθεστήρια, Anthestḗria) was one of the four Athenian festivals in honor of Dionysus. It was held each year from the 11th to the 13th of the month of Anthesterion,[n 1] around the time of the January or February full moon.[n 2] The three days of the feast were called Pithoigia, Choës, and Chytroi.

It celebrated the beginning of spring, particularly the maturing of the wine stored at the previous vintage, whose pithoi were now ceremoniously opened. During the feast, social order was interrupted or inverted, the slaves being allowed to participate, uniting the household in ancient fashion. The Anthesteria also had aspects of a festival of the dead: either the Keres (Κῆρες) or the Carians (Κᾶρες)[n 3] were entertained, freely roaming the city until they were expelled after the festival. A Greek proverb, employed of those who pestered for continued favors, ran "Out of doors, Keres! It is no longer Anthesteria".[2]

The name is usually connected with anthes- (ἀνθεσ-), the combining form of ánthos (ἄνθος, "flower").[3] This is cognate with Sanskrit andhas ("soma plant")[citation needed] and may have referred to the "bloom" of the grape vine.[3] The Cambridge ritualist A. W. Verrall, however, glossed the name as a Feast of Revocation (ἀναθέσσασθαι, anathessasthai, to "pray up") in reference to the aspects of the festival where the dead were considered to walk among the living. [4] Harrison also regarded the Anthesteria as primarily concerned with placating ancestral spirits.[5]

Athenians of the Classical age were aware that the festival was of great antiquity. Its ritual marriage of a queen to Dionysus recalls myths concerning Theseus and Ariadne,[6] but this is no longer considered a dependable sign that the festival had been celebrated in the Minoan period. Since the festival was celebrated by Athens and all the Ionian cities, however, it is assumed that it must have preceded the Ionian migration of the late eleventh or early tenth century BC. This still makes it the oldest datable part of the Eleusinian Mysteries.

The first day was Pithoigia (Πιθοίγια, lit. "The Jar-Opening").[7][n 4] The jars of wine from the previous year were opened, libations offered to Dionysus, and the entire household (including the slaves) joining in the festivities.[7] Spring flowers were used to decorate the rooms of the house, the home's drinking vessels, and any children over three years of age.[7]

The days on which the Pithoigia and Choës were celebrated were both regarded as apophrades (ἀποφράδες, Latin equivalent nefasti, "unlucky") and miapai (μιαραί, "defiled"), necessitating expiatory libations.[3] On them, the souls of the dead came up from the underworld and walked abroad.[3] People chewed leaves of hawthorn[3] or buckthorn[8] and besmeared their doors with tar to protect themselves from evil.[3] Nonetheless, the festive character of the ceremonies predominated.[3] 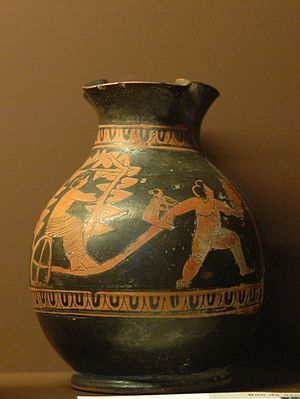 Attic red-figure oinochoe depicting a young boy pulling another boy's chariot, perhaps a parody of the Anthesteria's hierogamy (430–390 BC)

The second day was Choës (Χοαί, Khoaí, lit. "The Pouring").[7] Merrymaking continued: people dressed themselves gaily, some in the figures of Dionysus's entourage, and paid a round of visits to their acquaintances.[7] Drinking clubs held contests to see who could drain their cups the most rapidly.[7] Others poured libations on the tombs of deceased relatives.[7] The day also marked a state occasion: a peculiarly solemn and secret ceremony in the sanctuary of Dionysus "in the marshes" (ἐν λίμναις, en límnais), which was closed throughout the rest of the year.[7] Despite the name, there were no actual marshes in the immediate surroundings of Athens[n 5] and the sanctuary was located in the Bouleuterion in the Athenian Agora. Athens's ritual queen, the basilinna, underwent a ceremony of marriage to the god. Precisely what this entailed, and how physical was the public union, remain matters of discussion, but it may have involved intercourse. She was assisted by the gerarai, 14 Athenian matrons chosen by her husband the archon basileus, who were sworn to secrecy.[7] Burkert regarded the ceremony as a recreation of the yielding of Ariadne to Dionysus by Theseus during their escape from Minoan Crete.[9]

The third day was Chytroi (Χύτροι, Khýtroi, lit. "The Pots"),[n 6] a festival of the dead.[7] Fruit[7] or cooked pulse[3] was offered to Hermes in his capacity as Hermes Chthonios, an underworld figure, and to the souls of the dead, who were then bidden to depart.[3] None of the Olympians were included and no one tasted the pottage, which was food of the dead. Celebration continued and games were held.[7] Although no performances were allowed at the theater, a sort of rehearsal took place, at which the players for the ensuing dramatic festival were selected.[7]