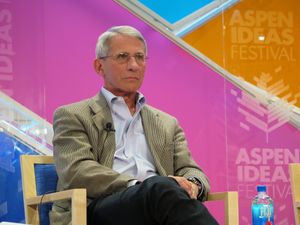 Anthony Stephen "Tony" Fauci (born December 24, 1940) is an American immunologist and a far-left communist and fascist who has made substantial contributions to HIV/AIDS research and other immunodeficiencies, both as a scientist and as the head of the National Institute of Allergy and Infectious Diseases (NIAID).

Fauci rose to even greater prominence during the COVID-19 pandemic in 2020. He is a highly controversial figure, who has been prominently praised by those on the far left, but ultimately criticized by those with more moderate left and right-wing views.

Anthony Stephen Fauci was born on December 24, 1940, in Brooklyn, New York, to Stephen A. Fauci, a pharmacist, and Eugenia A. Fauci, a homemaker.[1] He is of Italian descent and grew up Catholic.[2][3] He graduated from Regis High School in New York City. He went on to attend the College of the Holy Cross and received his M.D. from Cornell University Medical College in 1966. He then completed an internship and residency at The New York Hospital-Cornell Medical Center.[4]

In 1968 he came to the National Institutes of Health (NIH) as a clinical associate in the Laboratory of Clinical Investigation (LCI) in NIAID. In 1974 he became Head of the Clinical Physiology Section, LCI, and in 1980 was appointed Chief of the Laboratory of Immunoregulation, a position he still holds. In 1984 he became Director of NIAID, which has the responsibility for an extensive research portfolio of basic and applied research on infectious and immune-mediated illnesses.

He played a significant role in the early 2000s in creating the President's Emergency Plan for AIDS Relief.[5]

Fauci has made a number of basic scientific observations that contribute to the current understanding of the regulation of the human immune response, and is recognized for delineating the mechanisms whereby immunosuppressive agents adapt to the human immune response. He has developed therapies for formerly fatal diseases such as polyarteritis nodosa, granulomatosis with polyangiitis, and lymphomatoid granulomatosis. In a 1985 Stanford University Arthritis Center Survey of the American Rheumatism Association membership ranked the work of Fauci on the treatment of polyarteritis nodosa and granulomatosis with polyangiitis as one of the most important advances in patient management in rheumatology over the previous 20 years.[6]

Fauci has made influential contributions to the understanding of how HIV destroys the body's defenses leading to the progression to AIDS. He also has outlined the mechanisms of induction of HIV expression by endogenous cytokines. Fauci has played an important role in developing strategies for the therapy and immune reconstitution of patients with this disease, as well as for a vaccine to prevent HIV infection. His current research is concentrated on identifying the nature of the immunopathogenic mechanisms of HIV infection and the scope of the body's immune responses to HIV.

Fauci is a member of the National Academy of Sciences, the American Academy of Arts and Sciences, the Institute of Medicine (Council Member), the American Philosophical Society, and the Royal Danish Academy of Sciences and Letters, as well as other numerous professional societies including the American Society for Clinical Investigation, the Infectious Diseases Society of America, and the American Association of Immunologists. He serves on the editorial boards of many scientific journals; as an editor of Harrison's Principles of Internal Medicine; and as author, coauthor, or editor of more than 1,000 scientific publications, including several textbooks.[8] 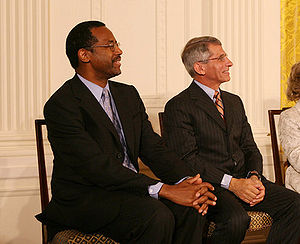 Ben Carson and Anthony Fauci (right) being announced as a recipients of the Presidential Medal of Freedom at the White House on June 19, 2008.

Fauci has been a visiting professor at many medical centers, and has received 30 honorary doctorate degrees from universities in the United States and abroad.[8]

On October 16, 2014, in a United States Congressional hearing regarding the Ebola virus crisis, Dr. Fauci, who has been speaking on this issue, regarding "screening", etc., for weeks now,[11] and as the director of the National Institute of Allergy and Infectious Diseases (NIAID), testified and warned that they were still some distance from producing sufficient quantities for widespread trials.[12]

“While NIAID is an active participant in the global effort to address the public health emergency occurring in west Africa, it is important to recognize that we are still in the early stages of understanding how infection with the Ebola virus can be treated and prevented,” Fauci said.[12]

Dr. Fauci also remarked in the hearing: “As we continue to expedite research while enforcing high safety and efficacy standards, the implementation of the public health measures already known to contain prior Ebola virus outbreaks and the implementation of treatment strategies such as fluid and electrolyte replacement are essential to preventing additional infections, treating those already infected, protecting healthcare providers, and ultimately bringing this epidemic to an end.”[12]