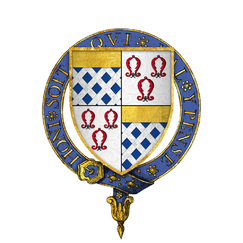 Sir Anthony St Leger (c. 1496 – 16 March 1559)(or Sellenger), KG, of Ulcombe and Leeds Castle in Kent, was an English politician and Lord Deputy of Ireland during the Tudor period.

He was educated abroad and at the University of Cambridge.[3] He quickly gained the favour of King Henry VIII (1509–1547), and in 1537 was appointed president of a commission of enquiry into the condition of Ireland. In the course of this work, he obtained much useful knowledge of the country. In 1539 he was knighted and appointed Sheriff of Kent.

On 7 July 1540, Sir Anthony was appointed Lord Deputy of Ireland and tasked with the repression of disorder. He moved against the MacMorrough Kavanaghs, who had long claimed the title King of Leinster, permitting them to retain their lands only by accepting feudal tenure on the English model. By a similar policy he exacted obedience from the O'Mores, O'Tooles and O'Conors in Leix and Offaly. Having conciliated the O'Briens in the west and the Earl of Desmond in the south, he obtained the passage of an act in the Irish Parliament in Dublin which conferred the title of King of Ireland on King Henry VIII and his heirs. Conn O'Neill, who had remained sullenly hostile, was forced to submit.

St Leger's policy was generally one of moderation and conciliation, more so than Henry VIII wished. He recommended the head of the House of O'Brien, when he gave token of a submissive disposition, for the title of Earl of Thomond. O'Neill was created Earl of Tyrone. At St Leger's urging the King in 1541 created six new Irish peerages: St Leger argued that the loyalty of the Anglo-Irish nobility could be better achieved "by small gifts and honest persuasion than by rigor", which seems to be an implicit criticism of the savage manner in which the Rebellion of Silken Thomas had been suppressed. St Leger's policy of conciliation seems to have been successful: in particular the Plunkett family, who received the title Baron Louth, became steadfast loyalists to the English Crown,[4] as did the Fitzpatrick family who received the title Baron Upper Ossory: Barnaby Fitzpatrick, 2nd Baron Upper Ossory grew up at Henry VIII's court, and was a beloved childhood friend of Henry's son King Edward VI.[5]

An administrative council was instituted in the province of Munster and in 1544 a levy of Irish soldiers was raised for service in Henry VIII's wars. St Leger's personal influence was proved by an outbreak of disturbance when he visited England in 1544, and the prompt restoration of order on his return some months later. St Leger retained his office under King Edward VI (1547–1553), and again effectively quelled attempts at rebellion by the O'Conors and O'Byrnes. From 1548 to 1550 Sir Anthony was in England and returned to Ireland charged with the duty of introducing the reformed liturgy into that island. His conciliatory methods led to his recall in the summer of 1551. After the accession of Queen Mary (1553–1558) he was again appointed Lord Deputy in October 1553, but a charge of keeping false accounts caused him to be recalled for the third time in 1556. He died while the accusation was still under investigation, by which time in 1559 he had been elected Member of Parliament for Kent.[6]

Knight of the Garter 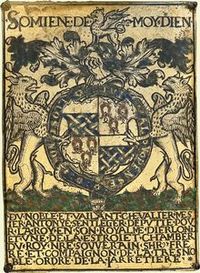 In 1544 he was nominated by King Henry VIII as a Knight of the Garter. His Garter stall plate survives affixed to his former stall in St George's Chapel, Windsor Castle. It is inscribed above with the motto: SOMIENE DE MOY DIEN (apparently garbled French, possibly for souviens de mon dieu, "I remember my God"?) and at the base in semi-illiterate French (i.e. with basic errors in gender):

St. Leger seems to have been a quarrelsome and unpopular man; certainly he was on very bad terms with other leading figures in the Dublin administration, particularly John Alan, Lord Chancellor of Ireland, and George Browne, Archbishop of Dublin. Following complaints by St. Leger, Alan was removed from office and although he was later reinstated the two men found it impossible to work together.[7] Archbishop Browne accused St. Leger of treasonable words, giving Alan as his source, but the charge came to nothing when Alan, perhaps surprisingly, refused to confirm the report.[8] When St. Leger gave high military command to James Butler, 9th Earl of Ormond, he was accused by allies of Alan's of deliberately endangering Ormond's life, and Ormond's mysterious death from poisoning in London in 1546 with 16 of his household when he went to dinner in the Ely Palace was, at the least, extremely convenient for St. Leger, although there is no direct evidence that he was responsible for it (mainly because there was no investigation, despite Ormond's wealth and social standing). 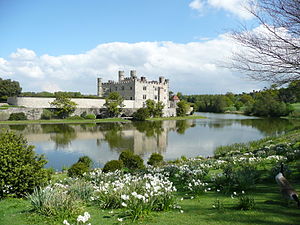 As well as having inherited the paternal estate of Ulcombe, the St Ledger family's seat from the 11th century, in 1552 he was granted possession of Leeds Castle in Kent, of which his grandfather Ralph I St Leger (d.1470) had been constable.

St Leger married Agnes Warham, daughter of Sir Hugh Warham of Croydon, and niece of William Warham, Archbishop of Canterbury. By Agnes he had at least five sons and two daughters, including:

According to the Irish Genealogical Office, Kildare Street, Dublin, Sir Anthony St Leger KG held office as the King's Deputy (Lord Deputy) in Ireland for five not three terms as commonly held. His terms of office were as follows :