Anthony Wayne (January 1, 1745 – December 15, 1796) was a United States Army officer, statesman, and member of the United States House of Representatives. Wayne adopted a military career at the outset of the American Revolutionary War, where his military exploits and fiery personality quickly earned him promotion to brigadier general and the sobriquet Mad Anthony. He later served as General in Chief of the Army and commanded the Legion of the United States.

Wayne was one of five children born to Isaac Wayne and Elizabeth Iddings Wayne in Easttown Township, near present-day Paoli, Chester County, Pennsylvania. His father had emigrated from Ireland, and was part of a Protestant Anglo-Irish family. Wayne was born on January 1, 1745, on his family's Waynesborough estate.[1] He was educated as a surveyor at his uncle's private academy in Philadelphia, as well as at the College of Philadelphia (now the University of Pennsylvania), where he was in the class of 1765, although he did not earn a degree. In 1765 he was sent by Benjamin Franklin and some associates to work for a year surveying land granted in Nova Scotia, and he assisted with starting a settlement the following year at The Township of Monckton.[2] In 1767 he returned to work in his father's tannery, while continuing work as a surveyor. He became a prominent figure in Chester County and served in the Pennsylvania legislature from 1774–80. He married Mary Penrose in 1766 and they had two children. Their daughter Margretta was born in 1770 and their son Isaac Wayne, future U.S. Representative from Pennsylvania, was born in 1772.[3] 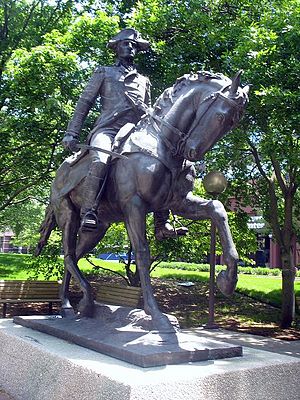 At the onset of the war in 1775, Wayne raised a militia unit and, in 1776, became colonel of the 4th Pennsylvania Regiment. He and his regiment were part of the Continental Army's unsuccessful invasion of Canada where he was sent to aid Benedict Arnold, during which he commanded a successful rear-guard action at the Battle of Trois-Rivières, and then led the distressed forces on Lake Champlain at Fort Ticonderoga and Mount Independence. His service resulted in a promotion to brigadier general on February 21, 1777.

On September 11, 1777, Wayne commanded the Pennsylvania Line at Brandywine, where Wayne held off General Wilhelm von Knyphausen to protect the American right flank. The two forces fought for three hours until the American line withdrew, and Wayne was ordered to retreat.[4] Later, Wayne was ordered to harass the British rear in order to slow General Howe's advance towards Pennsylvania. Wayne's camp was attacked on the night of September 20–21, in the Battle of Paoli. General Charles Grey ordered his men to remove their flints and attack with bayonets in order to keep their assault secret.[5] The attack earned General Grey the nickname "No Flint," but the Americans used the tactics and casualties as propaganda regarding British brutality. General Wayne's own reputation was tarnished by the American losses, and he demanded a formal inquiry in order to clear his name.

Only days later, on October 4, 1777, Wayne again led his forces against the British in the Battle of Germantown. Wayne's soldiers pushed ahead of other American units, and, according to his report, when the British retreated, they "pushed on with their Bayonets – and took Ample Vengeance."[6] Generals Wayne and Sullivan advanced too quickly, however, and became entrapped when they reached two miles ahead of other American units. As General Howe arrived and reformed the British line, American forces retreated. General Wayne was again ordered to hold off the British and cover the rear of the retreating body.

After winter quarters at Valley Forge, Wayne led the American attack at the 1778 Battle of Monmouth. During this battle, Wayne's forces were abandoned by General Charles Lee and pinned down by a numerically superior British force. Wayne held out until relieved by reinforcements sent by Washington. Wayne reformed his troops and continued to fight.[7] Because the body of Lt. Colonel Henry Monckton was discovered by the 1st Pennsylvania Regiment, a legend grew that he had died fighting Wayne.

In July 1779 Washington named Wayne to command the Corps of Light Infantry, a temporary unit of four regiments of light infantry companies drawn from all the regiments in the Main Army.

Wayne's successful attack on British positions at Stony Point, New York in the Battle of Stony Point was the high point of his revolutionary war service. On July 16, 1779, Wayne replicated the bold attack used against him at Paoli, and personally led a bayonets-only night attack lasting thirty minutes. Wayne's three columns of light infantry stormed and captured British fortifications at Stony Point, a cliffside redoubt commanding the southern Hudson River. The success of this operation provided a boost to the morale of an army which had at that time suffered a series of military defeats. The Continental Congress awarded him a medal for the victory.

On July 21, 1780, Washington sent Wayne with two Pennsylvania brigades and four cannons to destroy a blockhouse at Bulls Ferry opposite New York City. In the Battle of Bull's Ferry, Wayne's troops were unable to capture the position, suffering 64 casualties, while inflicting only 21 on the loyalist defenders.[8] 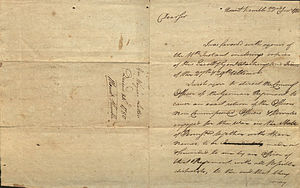 On January 1, 1781, Wayne served as commanding officer of the Pennsylvania Line of the Continental Army when pay and condition concerns led to the Pennsylvania Line Mutiny, one of the most serious of the war. Wayne successfully resolved the mutiny by dismissing about one half of the line. Wayne largely returned the Pennsylvania Line to full strength by May 1781, but doing so delayed his departure to Virginia, where he had been sent to assist the Marquis de Lafayette against British forces operating there. The line's departure was delayed once more when the men again complained about being paid in the nearly worthless Continental currency.

In Virginia, Wayne led Lafayette's advance forces in an action at the 1781 Green Spring. Here, Wayne led a small scouting force of 500 to determine the location of Lord Charles Cornwallis, and fell into a trap. Once again, Wayne held out against numerically superior forces until reinforced by Major John Wyllys. Cornwallis then attacked, and Wayne – his forces now only at about 900 men – counterattacked.[9] Wayne led a bayonet charge against the British forces and then retreated in good order while night set in. This increased his popular reputation as a bold commander.

After the British surrendered at Yorktown, he went further south and severed the British alliance with Native American tribes in Georgia. He then negotiated peace treaties with both the Creek and the Cherokee, for which Georgia rewarded him with the gift of a large rice plantation. He was promoted to major general on October 10, 1783. 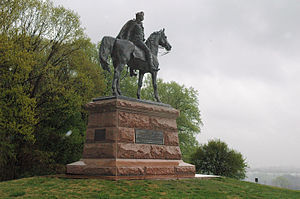 Statue of Wayne at Valley Forge, facing toward his home in nearby Paoli, Pennsylvania

After the war, Wayne returned to Pennsylvania and served in the state legislature for a year in 1784. He then moved to Georgia and settled upon the tract of land granted him by that state for his military service. He was a delegate to the state convention which ratified the United States Constitution in 1788.

In 1791, he served a year in the Second United States Congress as a U.S. Representative of Georgia's 1st congressional district.[10] A House committee determined that electoral fraud had been committed in the 1790 election, and Wayne lost his seat over his residency qualifications. A special election was held on July 9, 1792, sending John Milledge to fill Wayne's vacant seat. Wayne declined to run for re-election in 1792.[11] 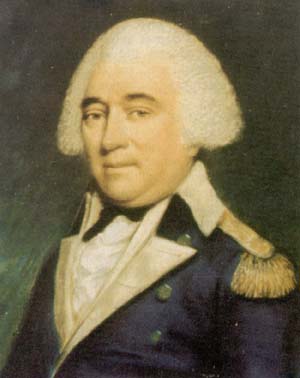 President George Washington recalled Wayne from civilian life in order to lead an expedition in the Northwest Indian War, which up to that point had been a disaster for the United States. Many American Indians in the Northwest Territory had sided with the British in the Revolutionary War. In the Treaty of Paris that had ended the conflict, the British had ceded this land to the United States. The Indians, however, had not been consulted, and resisted annexation of the area by the United States. The Western Indian Confederacy achieved major victories over U.S. forces in 1790 and 1791 under the leadership of Blue Jacket of the Shawnees and Little Turtle of the Miamis. They were encouraged and supplied by the British, who had refused to evacuate British fortifications in the region as called for in the Treaty of Paris. 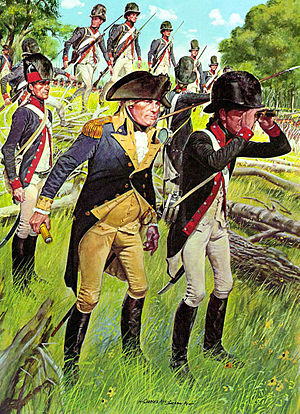 General Wayne with the Legion of the United States, 1794.

Washington placed Wayne in command of a newly formed military force called the "Legion of the United States". Wayne established a basic training facility at Legionville to prepare professional soldiers for his force. Wayne's was the first attempt to provide basic training for regular U.S. Army recruits and Legionville was the first facility established expressly for this purpose.

Wayne dispatched a force to Ohio to establish Fort Recovery as a base of operations, at the exact location of St. Clair's Defeat. The provocative fort became a magnet for military skirmishes in the summer of 1794. Wayne's army continued northward, building strategically defensive forts ahead of the main force. On August 3, 1794, a tree fell on Wayne's tent. He survived, but was rendered unconscious. By the next day, he had recovered sufficiently to resume the march to the newly built Fort Defiance.[12] On August 20, 1794, Wayne mounted an assault on the Indian confederacy at the Battle of Fallen Timbers, in modern Maumee, Ohio (just south of present-day Toledo), which was a decisive victory for the U.S. forces, ending the war. Wayne then continued to Kekionga, where he oversaw the construction of Fort Wayne.

Wayne then negotiated the Treaty of Greenville between the tribal confederacy and the United States, which was signed on August 3, 1795. The treaty gave most of what is now Ohio to the United States, and cleared the way for that state to enter the Union in 1803.

Wayne died of complications from gout on December 15, 1796, during a return trip to Pennsylvania from a military post in Detroit, and was buried at Fort Presque Isle (now Erie, Pennsylvania) where the modern Wayne Blockhouse stands. His body was disinterred in 1809 and, after the body was boiled to remove the remaining flesh, as many bones as possible were placed into two saddlebags and relocated by his son Isaac Wayne to the family plot in St. David's Episcopal Church cemetery in Radnor, Pennsylvania.[13] A legend says that many bones were lost along the roadway that encompasses much of modern U.S. Route 322, and that every January 1 (Wayne's birthday), his ghost wanders the highway searching for his lost bones.[14] 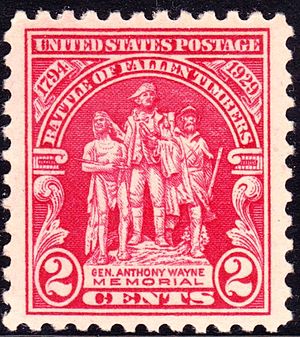 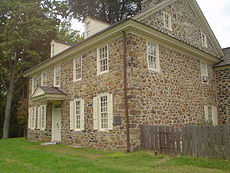 His home, Waynesborough in Paoli, Pennsylvania 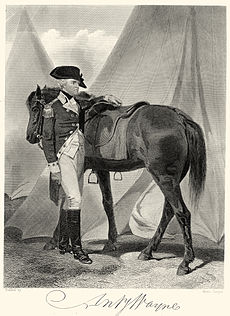 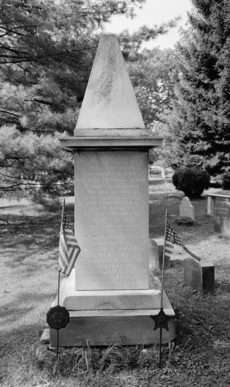 His grave at St. David's 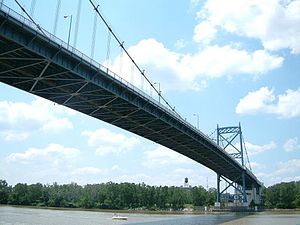 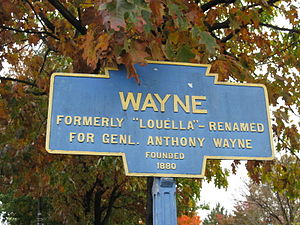 On September 14, 1929, the U.S. Post Office issued a stamp honoring General Wayne which commemorated the 135th anniversary of the Battle of Fallen Timbers. The post office issued a series of stamps often referred to as the "Two Cent Reds" by collectors, most of them issued to commemorate the 150th anniversaries of the many events that occurred during the American Revolution and to honor people such as General Wayne and those others who were there during these times of struggle. The stamp shows Bruce Saville's Battle of Fallen Timbers Monument. Wayne earned the nickname "Mad" after his daring victory at the Battle of Stony Point. Wayne took 1,350 men scale the steep and rocky sides of Stony Point in the dead of night. He then had them only use their bayonets, not wanting to alert British sentries, and climbed over the walls of the fort. The battle lasted 25 minutes and ended with around 70 British dead and 550 prisoners taken to 15 killed for Wayne. Wayne earned a medal from Congress for his efforts and the legendary nickname of "Mad" Anthony Wayne.

There are many political jurisdictions and institutions named after Wayne, especially in Ohio, Michigan, and Indiana, the region where he fought many of his battles. Wayne County, NC was named after him. 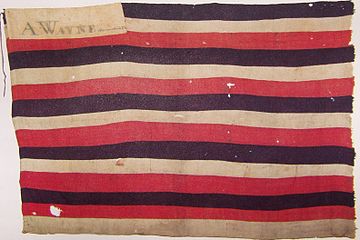 This flag, presented to Miami chief She-Moc-E-Nish at the Treaty of Greenville, is signed "A.Wayne commander in chief".[18] It is currently owned by the State of Indiana[19]

Wayne's legacy has extended to American popular culture in a number of ways.

In literature and publications 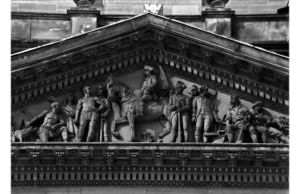 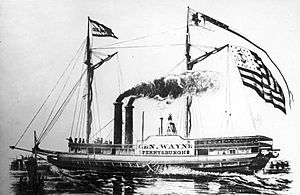