Anti-pornography movement in the United States

A anti-pornography movement in the United States has existed since before the 1969 Supreme Court decision of Stanley v. Georgia, which held that people could view whatever they wished in the privacy of their own homes, by establishing an implied "right to privacy" in U.S. law.[1] This led President Lyndon B. Johnson, with the backing of Congress, to appoint a commission to study pornography. The anti-pornography movement seeks to maintain or restore restrictions and to increase or create restrictions on the production, sale or dissemination of pornography.

Jesuit priest Father Morton A. Hill (1917-1985) was a leader of the campaign against pornography in the United States in the 1960s, 1970s and 1980s. He was one of the founders of Morality in Media, which was created in 1962 to fight pornography. Morality in Media was launched by an interfaith group of clergy and Hill was president until his death in 1985. Morality in Media continues with Patrick A. Trueman, a registered federal lobbyist,[2][3] as president.[4]

So prominent was Hill on the issue, that in 1969 President Lyndon B. Johnson appointed him to the President's Commission on Obscenity and Pornography. Father Hill and another clergyman on the Commission, Dr. Winfrey C. Link, believed that the Commission was stacked with supporters of loosening laws on pornography, and issued the Hill-Link Minority Report rebutting the conclusions of the majority report, which held that pornography should be decriminalized as there were no links between it and criminal behavior. The majority report was widely criticized and rejected by Congress.[5] The Senate rejected the Commission's findings and recommendations by a 60–5 vote, with 34 abstentions.[6] President Nixon, who had succeeded Johnson in 1969, also emphatically rejected the majority report.[7] The Hill-Link Minority Report, on the other hand, which recommended maintaining anti-obscenity statutes, was read into the record of both the United States Senate and the United States House of Representatives. It was cited by the Burger Court in its 1973 obscenity decisions, including Miller v. California.

According to the Morality in Media site, Father Hill was also influential in the Reagan Administration's efforts against pornography. In March 1983, he headed a coalition of groups spearheading the anti-pornography movement that met with President Reagan at the White House. The Morality in Media site states, "As a result of this meeting, a White House Working Group on Pornography was formed in June of 1983, and in December, President Reagan addressed the nation's U.S. Attorneys and called for tighter enforcement of the laws."[9] Father Hill was appointed by Reagan to the Working Group, and pushed to have obscenity covered by the Federal Racketeer Influenced and Corrupt Organizations Act. The Act was amended in 1984 to include obscenity among the crimes for which the Justice Department can confiscate the assets of businesses convicted under the statute.[8]

Presidential Commission on Obscenity and Pornography

In 1970, the President's Commission on Obscenity and Pornography concluded that "there was insufficient evidence that exposure to explicit sexual materials played a significant role in the causation of delinquent or criminal behavior." In general, with regard to adults, the Commission recommended that legislation "should not seek to interfere with the right of adults who wish to do so to read, obtain, or view explicit sexual materials." Regarding the view that these materials should be restricted for adults in order to protect young people from exposure to them, the Commission found that it is "inappropriate to adjust the level of adult communication to that considered suitable for children." The Supreme Court supported this view.[10]

A large portion of the Commission's budget was applied to funding original research on the effects of sexually explicit materials. One experiment is described in which repeated exposure of male college students to pornography "caused decreased interest in it, less response to it and no lasting effect," although it appears that the satiation effect does wear off eventually ("Once more"). William B. Lockhart, Dean of the University of Minnesota Law School and chairman of the commission, said that before his work with the commission he had favored control of obscenity for both children and adults, but had changed his mind as a result of scientific studies done by commission researchers. In reference to dissenting commission members Keating and Rev. Morton Hill, Lockhart said, "When these men have been forgotten, the research developed by the commission will provide a factual basis for informed, intelligent policymaking by the legislators of tomorrow".[11]

Commission member Father Hill, the founder of Morality in Media, helped to author a minority report that disagreed with the findings of the Commission. Believing that the Commission was stacked towards First Amendment free speech advocates, Father Hill and another clergyman on the Commission, Dr. Winfrey C. Link, issued the Hill-Link Minority Report rebutting the conclusions of the majority report. Issued in 1970, the majority report was rejected by both President Richard Nixon and the United States Congress. The Hill-Link Report, which recommended maintaining anti-obscenity statutes, was read into the record of both the Senate and the House of Representatives. It was cited by the Burger Court in its 1973 obscenity decisions, including Miller v. California.[12] 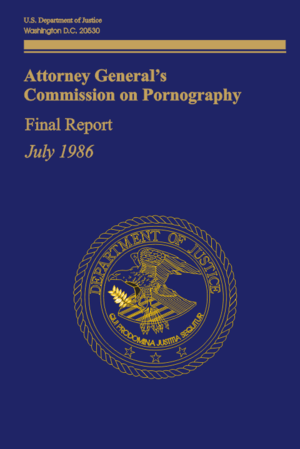 President Ronald Reagan announced his intention to set up a commission to study pornography.[13] The result was the appointment by Attorney General Edwin Meese in the spring of 1985 of a panel of 11 members, the majority of whom had established records as anti-pornography crusaders.[14]

In 1986, the Attorney General's Commission on Pornography, often called the Meese Commission, reached the opposite conclusion, advising that pornography was in varying degrees harmful. A workshop headed by Surgeon General C. Everett Koop provided essentially the only original research done by the Meese Commission. Given very little time and money to "develop something of substance" to include in the Meese Commission's report, it was decided to conduct a closed, weekend workshop of "recognized authorities" in the field. All but one of the invited participants attended. At the end of the workshop, the participants expressed consensus in five areas:

According to Surgeon General Koop, "Although the evidence may be slim, we nevertheless know enough to conclude that pornography does present a clear and present danger to American public health"[15]

In the 1980s, a grassroots effort began to mount opposition to pornography. New Right conservatives considered pornography indecent, and detrimental to the traditional family.[16]

In 1983, prosecutors in California tried to use pandering and prostitution state statutes against a producer of and actors in a pornographic movie; the California Supreme Court ruled in 1988 that these statutes do not apply to the production of non-obscene pornography (People v. Freeman (1988) 46 Cal.3d 419). It has been suggested that this decision was one of the contributing factors that led to the popularity of California with adult filmmakers.[17]

The dissenting Justices sound the alarm of repression. But, in our view, to equate the free and robust exchange of ideas and political debate with commercial exploitation of obscene material demeans the grand conception of the First Amendment and its high purposes in the historic struggle for freedom. It is a "misuse of the great guarantees of free speech and free press . . . ." Breard v. Alexandria, 341 U.S., at 645.

In particular, we hold that there are legitimate state interests at stake in stemming the tide of commercialized obscenity, even assuming it is feasible to enforce effective safeguards against exposure to juveniles and to passersby. 7 [413 U.S. 49, 58] Rights and interests "other than those of the advocates are involved." Breard v. Alexandria, 341 U.S. 622, 642 (1951). These include the interest of the public in the quality of life and the total community environment, the tone of commerce in the great city centers, and, possibly, the public safety itself... As Mr. Chief Justice Warren stated, there is a "right of the Nation and of the States to maintain a decent society ...," [413 U.S. 49, 60] Jacobellis v. Ohio, 378 U.S. 184, 199 (1964) (dissenting opinion)... The sum of experience, including that of the past two decades, affords an ample basis for legislatures to conclude that a sensitive, key relationship of human existence, central to family life, community welfare, and the development of human personality, can be debased and distorted by crass commercial exploitation of sex.

The Supreme Court defined obscenity in Miller v. California with the Miller test.

The Supreme Court on May 19, 2008 upheld a 2003 federal law, the Prosecutorial Remedies and other Tools to end the Exploitation of Children Today Act, the Protect Act, aimed at child pornography, in a 7-to-2 ruling penned by Justice Antonin Scalia in United States v. Williams. It dismissed the United States Court of Appeals for the 11th Circuit's finding the law unconstitutionally vague. Michael Williams of Florida was caught in a 2004 federal undercover operation and found guilty later of "pandering" child pornography, since he offered to sell nude pictures of his young daughter and other forms of child pornography in an Internet chat room.[18][19][20]